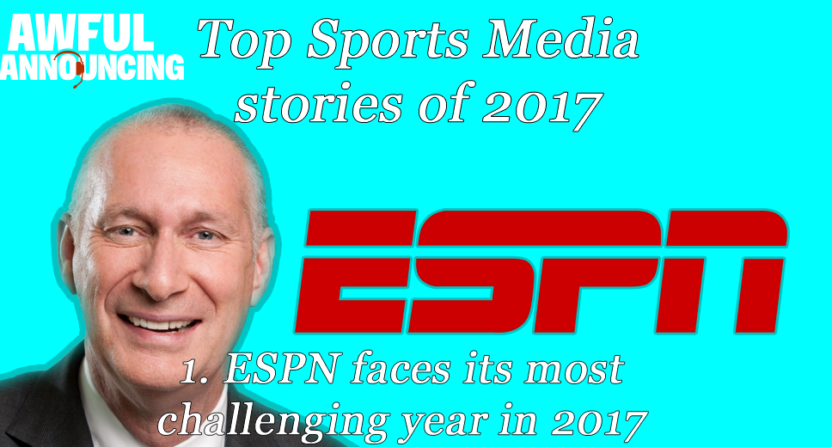 In a normal year, the abrupt and sudden resignation of ESPN President John Skipper would stand alone as the biggest sports media story of 2017. But 2017 has been anything but a normal year. And in 2017, Skipper’s shocking resignation, stepping down to deal with a substance abuse problem, was the coup de grace for what could only be described as the most challenging, tumultuous year in the 38-year history of the network.

Perhaps that sounds like a hyperbolic statement given the arduous task of building ESPN from a startup regional network in Bristol, Connecticut to a global behemoth that dominates not just sports, but the entire media landscape. Nevertheless, a closer examination of ESPN’s 2017 shows that Bristol has been in crisis management mode for almost the entire calendar year.

Consider the following challenges that ESPN has endured during the past 12 months:

** The layoffs of dozens of prominent on-air employees in April, including individuals that had been popular figures on ESPN airwaves for decades. These layoffs were followed by another round of cuts for behind-the-scenes staffers in November.

** Being constantly embroiled in the never-ending culture wars and having to battle claims of “liberal bias” by the likes of Breitbart, Fox News, and Clay Travis.

** A very public feud with the sitting President of the United States.

** The self-inflicted wound of entering into a partnership with Barstool Sports, only to pull the plug after one week when Barstool’s controversial past was brought back to the forefront by ESPN employees.

** Constant scrutiny from Disney shareholders, thanks to falling operating income and serious questions about the network’s plans to reverse negative business trends like cord cutting.

** A lengthy Boston Globe report entitled “At ESPN, the problems for women run deep” that detailed allegations of sexual harassment and employees being punished for being pregnant. ESPN tried to combat the harassment allegations, but that only invited more criticism and skepticism of the network when Bristol released only a portion of a text message exchange between SportsCenter anchor John Buccigross and former anchor Adrienne Lawrence.

** Record-low ratings for Monday Night Football, which ESPN happens to be paying $1.1 billion a year for in rights fees.

** The aforementioned resignation of John Skipper.

That’s a lot of very, very, very bad things to happen to one network in one calendar year. ESPN would probably give anything to go back to a much simpler time when the biggest thing they had to worry about was Bill Simmons calling out Roger Goodell.

And to tell the truth, the above list is not even the entire picture of ESPN’s last 12 months if you really wanted to drill down and mention everything that didn’t go according to plan for the network, like the awkward, protracted Mike & Mike divorce.

If ESPN only had to deal with one or two things from this list above, 2017 could best be described as “tumultuous.” But to have to deal with all of this list in just 12 months? ESPN has to feel as if they’ve gone 24/7/365 in the ring with Prime Mike Tyson with no bell at the end of the round to save them. There’s less than 72 hours left in 2017 and yet there has to be an ominous sense of trepidation circulating around Bristol wondering what else could possibly go wrong.

Just a month ago, a contract extension was announced for Skipper to continue as ESPN’s president. At the time, there were serious questions about how Skipper would navigate such uncertain waters for ESPN’s future in a constantly changing industry following such a difficult year. Now with Skipper standing down, ESPN faces the same questions and the same uncertainty without even knowing who is captaining the ship moving forward.

Trying to sift through all of these various changes and controversies, there are a few that stand out as ones which will be continuing challenges for ESPN and ones the network will hope were one-time wobbles.

The network was its own worst enemy at times in 2017 with the way they handled certain situations like an announcer named Robert Lee broadcasting a Virginia football game or its short-lived association with Barstool. If ESPN can be sensible about such things in 2018, perhaps they can avoid some of the more ridiculous headlines that came their way in 2017.

ESPN will be hopeful they can find a way to stay out of the culture wars in 2018, which may prove to be a challenge in an election year. Bristol is clearly trying their hardest to exit the political theater, but as we saw this year, all it will take is one tweet from one person to drag them back in. At the very least, Bristol can cross their fingers and hope for a more peaceful year on the political front where they aren’t under constant attack from Fox News, Breitbart, and Clay Travis. 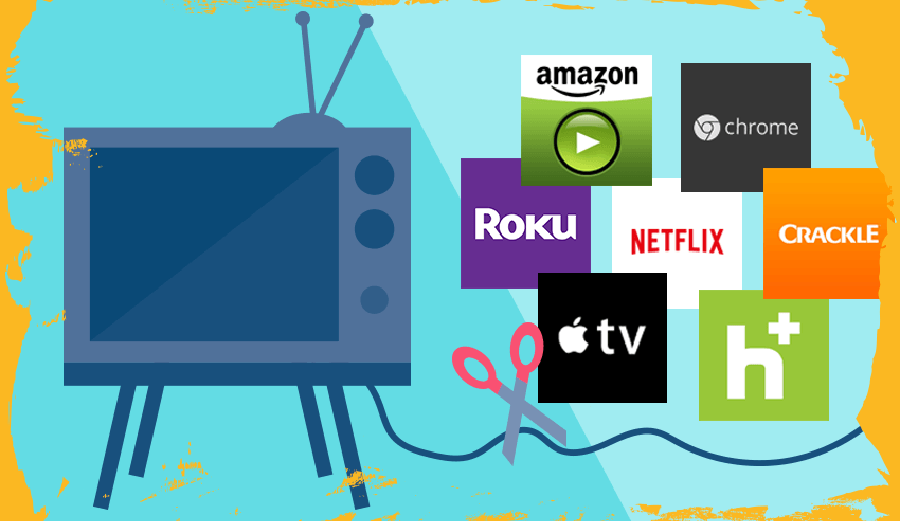 Then there are the larger issues at play that ESPN has to find a way to address: declining subscribers, cord cutting, and rising rights fees. Those aren’t problems the network can just hope goes away.

On the other side, ESPN has to find a way to cope with the constant exponential increases in rights fees. We’ve already seen them have to be more selective in rights acquisitions after losing prized World Cup rights to Fox Sports. And we’ve seen them cut millions of dollars in salaries with multiple rounds of painful layoffs. Even the unthinkable has been floated out as a potential solution — walking away from Monday Night Football after the ESPN-NFL contract expires in 2021.

If there is a gleam of hope in all of this, it’s the following: if there is any network or any media company that is built to withstand challenges that come from seemingly all angles, it is ESPN. This is still a multi-billion dollar global conglomeration that is likely worth more than all of their competitors combined. ESPN still dominates in ratings, still is the default viewing option in every gym, bar, and restaurant in America, and still is the one name most synonymous with sports. Those facts aren’t changing anytime soon.

But if there is one thing 2017 did show, it’s that ESPN, like every one of their media peers, finds themselves in a position of vulnerability and uncertainty. In 2018, ESPN will have to find a way to integrate the Fox regional sports networks into their empire and work out an effective over-the-top service that can finally reach out to a wider, more diverse audience. First of all, they will have to find a new president to replace John Skipper.

ESPN will welcome 2018. But even with the troubles of 2017 behind them in the rearview mirror, the road ahead won’t get any easier.