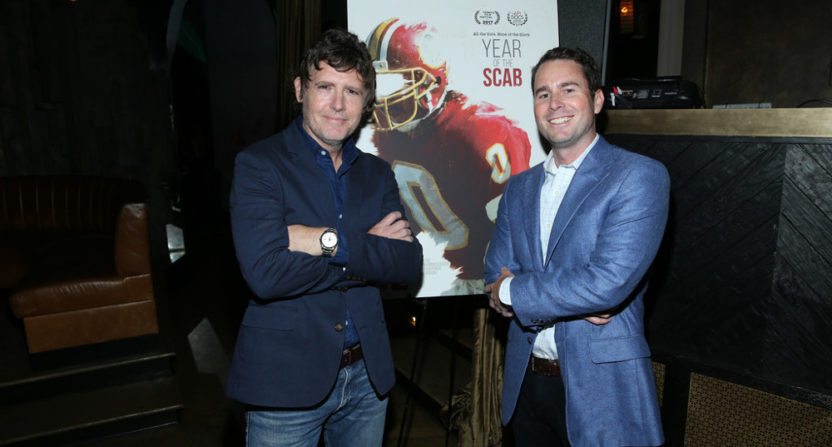 ESPN has announced another 30 for 30 documentary’s air date, and it will be accompanied by a 30 for 30 short. Year of the Scab, which is directed by John Dorsey  (who previously directed The Marinovich Project and was an executive producer on Pony Excess) and tells the story of the replacement players who suited up for the Washington Redskins during the 1987 NFL strike, will air Tuesday, Sept. 12 at 8 p.m. Eastern.

Dorsey (seen at left above at the Tribeca Film Festival premiere, with executive producer David George) presents this as a look at the real story that inspired the fictionalized 2000 film The Replacements. It will then be followed at 9:30 p.m. Eastern by 25-minute short Strike Team, which discusses a U.S. Marshals’ sting to lure fugitives with free Redskins’ tickets. Here are more details on Year of the Scab from ESPN’s release:

“Year of the Scab,” which has screened at the Tribeca Film Festival in New York as well as closing night at AFI Docs in D.C., looks at the men who served as replacements for the Redskins in 1987 when NFL players went on strike to gain bargaining power in their struggle with the team owners. Crossing the picket line to play in the NFL changed their lives, but not in the way they’d expected or hoped. For most of them, what was billed as the last shot at a dream became the final blow to their careers. This group, who were called “scabs,” braved ridicule and threats of violence for one last chance at glory.

Now 30 years later, director John Dorsey introduces viewers to some of these players and their stories, as well as the men whose jobs they took and other participants in one of sports’ strangest chapters. The replacement squad won all three games before the strike ended, and the Redskins went on to win the Super Bowl that season. Yet most of the “scabs” were watching from home as the team they had helped get to the playoffs won the biggest game of the year.

…“In 1987, a bunch of nobodies were offered a second shot a dream they thought had died,” said director John Dorsey. “What they didn’t know was that their golden ticket would become a scarlet letter. For 30 years, an experience that should have been a badge of honor has been the scab that never healed, and I hope that through this film their story will be given the recognition it deserves.”

And some information on Strike Team, which focuses on the U.S. Marshals’ December 15, 1985 sting to lure fugitives to the Washington Convention Center for free tickets to the Redskins’ game that day against the Cincinnati Bengals:

Director Willie Ebersol retells the story of the operation, from the planning stages when it was met with skepticism, through the comical dress rehearsal, and on to its suspenseful execution. All in all, more than 100 fugitives were arrested that day without a shot being fired.

“It’s so rare for a documentary to actually place an audience inside an event from over 30 years ago,” said Willie Ebersol, director. “But after discovering a treasure trove of never-before-seen footage, we were able to give viewers a front row seat to this fun and wild operation, from conception to execution, making sure to not miss a single epic 80’s mustache along the way.”

He added, ”‘Strike Team’ gives a truly behind-the-scenes look into the most elaborate, can’t-believe-it-actually-happened sting in U.S. law enforcement history — all without ever breaking tension or era by cutting away to interviews.”

Both of these sound like pretty remarkable stories, and it makes sense to pair them up given how they’re both covering the Redskins in the 1980s. The timing also makes sense, as Sept. 12 is a Tuesday, just after the first week of the NFL season wraps up; that’s probably a good time to attract viewers looking for more NFL-related content. Both of these stories could be pretty interesting, too, as they’re covering events that haven’t often been discussed in great detail (unlike some recent 30 for 30s like the one on the Lakers-Celtics rivalry).

Many are certainly aware of the 1987 player strike (and the fictionalized portrayal it received in The Replacements, which also focused on the Washington team and the three of four games it won to make the playoffs), but the details aren’t necessarily common knowledge. The reality of what happened to these players could make for a good story. And as Redskins.com’s Jake King-Schriefels explored in a May article talking to Dorsey and some of the players involved, the team’s approach to that strike was particularly unique:

What made the Redskins a worthy subject throughout this forgotten period in time – besides the fact that the team would eventually win the Super Bowl – was the way it managed those three weeks of league-wide chaos. Unlike other teams, which eventually saw several of their star players cross the picket line to collect their paychecks and play again, the Redskins fielded a team comprised of replacement players for the duration of the strike – and to the surprise of everyone, they won all three of their games.

“I realized there was this irony in valuing team cohesion as a methodology to survive the strike, and ultimately that philosophy paid dividends in the Super Bowl run,” Dorsey told Redskins.com. “It was pretty clear that Washington was the only team to focus on during the strike.”

…This was only the beginning. Even as the replacements practiced and played, they faced the stigma associated with breaking a strike, an unpopular act, especially in a major city of working people. The film captures archival footage of fans protesting their entry into RFK Stadium on their first game against the Cardinals, one they would win and turn wide receiver Anthony Allen into a replacement star. The animosity was understandable. It also informs the way these replacements have lived the rest of their lives, burdened with guilt for fulfilling a lifelong ambition.

“They thought they had the golden ticket but it ended up being a scarlet letter,” Dorsey said. “That kind of emotional whiplash left them emotionally tender when it came to the memories of their experience. The indignity of being cast aside and forgotten largely en route to a Super Bowl and not getting rings is something that many of them just wanted to forget. They never really had the forum to present their accomplishments in the proper context.”

So, that could definitely be interesting, and could present a side of this that hasn’t been frequently told. And Strike Team is definitely an off-the-radar story, too, and one with some potential to be entertaining. We’ll see how these turn out.