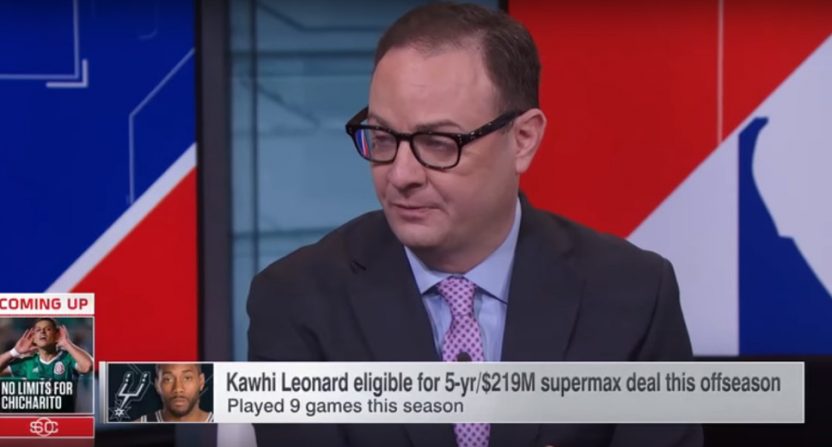 One of the more interesting media questions in the next couple of months may revolve around the NBA draft, and if famed reporter Adrian Wojnarowski will indicate picks before they’re shown on TV. Woj has a long history of doing that during his time at Yahoo, and doing so on their streaming draft show the past two years, but this will mark his first year of covering the draft for TV rightsholder ESPN; previously, he said he didn’t care about spoiling ESPN’s TV coverage considering that they were “a competitor,” but will that change now that he’s working for the Worldwide Leader, especially considering their longstanding anti-tipping policy around the NFL draft?

Of course, ESPN let their own reporters break pick news on Twitter last year, but some of that may have been knowing that Woj would do it if they didn’t. Still, from Woj’s comments to Adam Carapell for a Complex feature published this week, it sounds like pick-tipping may still be in the cards. He did say there haven’t been firm conversations about that yet, though, as he’s been focused on lottery coverage (which happened last night, along with him and the rest of the lottery team being featured on a second-screen experience broadcast for Game 2 of the Eastern Conference Finals on ESPN2) and coverage of the upcoming combine. Here are his comments on that front:

Is the plan come draft night to tweet out the selections before Adam Silver announces them?

We haven’t talked a lot about the draft. I think how we’re covering the draft and how it’s going to look, as far as I know, nothing’s changed. But we’ve been focused on the combine and the lottery and I know we’ll start getting into those conversations after that. But draft night is always huge for news and trades. To me, the bigger thing on draft night has always been the trades and deals. You look back at the draft night deals, Portland moving up to get Zach Collins and Utah moving up to get Donovan Mitchell, were obviously impactful. And prior to the daft, the [Markelle] Fultz, [Jayson] Tatum Boston-Philly trade. That’s always more interesting to me than the picks, but it’s all part of that night and it’s taken on a life of its own over the years.

That’s not an entirely new approach, as Woj has often emphasized his focus on the trades and deals rather than just who teams will pick, but reporting who they will pick has also been a key part of his draft coverage over the years. And it will be interesting to see how ESPN handles that now he’s in the fold. NBA fans have launched many less complaints against pick-tipping than NFL fans over the years, maybe because it’s been such a common thing with Woj et al, so there’s certainly a chance Woj could just continue as before (he’ll likely be part of ESPN’s on-air coverage too, but that didn’t stop him from breaking tons of news on Twitter as well while at Yahoo), and that may make sense to keep him happy, to keep fans who like knowing what’s next happy, and to keep them from getting scooped by reporters for non-rightsholders (such as Yahoo’s Shams Charania).

But it’s also possible that the network could try and limit the pick-tipping to try and bolster their on-air show, an approach we’ve seen with their and NFLN’s coverage of the NFL draft, and that could have all sorts of interesting ramifications if they go that route.

In any case, that’s only one of the particularly notable sections of this profile piece. The other one revolves around Woj’s dual iPhones, which he told Carapell is thanks to a tip he got from ESPN NFL insider Adam Schefter:

“Schefter taught me a little trick that I had never thought of which was have your second phone with a different carrier,” says Woj. “Have two different carriers and the text messages come in on the same number because sometimes if you’re in a bad area it won’t come in on one carrier but a text will come in on another. I’m actually fearful because I’ve lost some [texts] before where people sent things and sometimes it gets jammed up. I’ve learned a lot from him, but that’s a tangible one.”

That’s something most people probably won’t have to contemplate, but for a highly-connected reporter who’s often travelling and often breaking news, it makes a lot of sense. There are lots of areas where cell coverage is strong on one carrier and weak on another, so having separate phones on different carriers but with texts routed to the same number can certainly seem beneficial. And hey, for people and companies with the resources to pull that off, why not?

It’s notable that elsewhere in the profile, too, Woj talks about how “After one or two text messages, I like to pick the phone up,” and about how he values the facetime he gets with different NBA coaches, front office staffers and so on at events like the NBA combine. So it’s not like he’s learning everything reports only through texts. But still, texts can be pretty important, so it’s smart that he’s figured out a way to maximize his chances of getting them in a timely manner. The main question now may be to what extent he’s able to report what he learns during ESPN’s draft coverage, whether that’s via text or via another method.