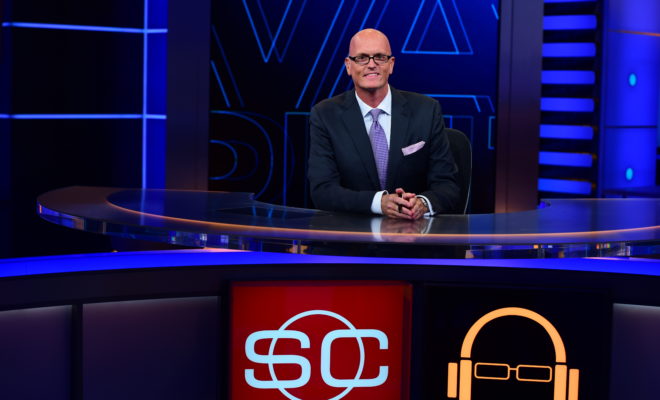 ESPN made a big bet around this time three years ago that would reshape their daily television lineup and, even going as far as breaking the mold of the nearly forty year history of the network. ESPN would take an hour-long edition of their flagship program SportsCenter and completely turn it over to anchor Scott Van Pelt with the newly christened SC:SVP.

Three years later, the program is still a major part of ESPN’s daily lineup with ratings doing well and SVP signing a new contract extension with the network last year. He commemorated the show’s anniversary with this tweet.

Three years ago, I headed into work to start a new show. As we begin year four, my sincere thanks for staying up late with us and allowing us to keep you company. We are grateful every day. #NotTiredYet

Given the prosperity of the Van Pelt SportsCenter, it’s ironic that ESPN has had a couple very notable failures when it comes to similarly branded programs. In some ways, maybe it’s even fair to say that its success has been both a blessing and a curse for Bristol.

With the launch of SC:SVP, ESPN went through a phase where it seemed like every episode of SportsCenter throughout the day was to receive its own individual branding. SportsCenter:AM has largely flown under the radar. Then there was SC6 starring Jemele Hill and Michael Smith, which drew quite a number of headlines during its short lifespan.

SC:6 lasted just one year from February 2017 – February 2018. SC6 was even more of a departure from the traditional SportsCenter format than Van Pelt. Unfortunately, we never got to see the full potential of the show as the plug was pulled so early. Throughout those 12 months, SC6 seemed to make more news for what happened off air than what happened on ESPN airwaves. Hill’s criticism of Donald Trump drew ESPN into the political realm and her tweets about Jerry Jones drew a suspension.

What made the difference between SC6 and SC:SVP? If you’re a fan of Hill and Smith, you could easily argue that the duo never had the full support of management. That was seen when ESPN trolled Smith and Hill by publicizing the fact that ratings increased for the timeslot once it returned to a more traditional format. Smith publicly aired his frustration with ESPN executives over how SC6 played out and now Hill is no longer with the network.

Earlier this year, in comments to Awful Announcing, ESPN executive Norby Williamson admitted that Hill and Smith weren’t set up to succeed because it retained so little of a traditional SportsCenter. Hill echoed those sentiments as well. She told Awful Announcing that there really was no comparision between the shows because even though they kept the SC moniker, they were different shows for different audiences.

“Scott Van Pelt had the advantage of being a longtime SportsCenter veteran, who was coming off live games and at a time slot where I think the viewer is a little more open to full-on personality,” Hill said. “He’s competing against Fallon, Kimmel and Colbert. In that time slot, you expect a little edge. Scott is an excellent broadcaster, but comparing our show to his is a bit of a misnomer.”

In hindsight, does ESPN even attempt SC:6 without the long-term viability of SC:SVP? Perhaps not. But lest you think this is just a SportsCenter thing, ESPN has also tried handing a programming block to another long-time personality with similar struggles.

ESPN made another hefty wager this year that Mike Greenberg could break off from his long-time radio show with Mike Golic and make it on his own. In addition, ESPN would scrap a morning block of SportsCenter and let Greenberg be the central figure for a new morning show, Get Up. Greenberg would be joined by Michelle Beadle and Jalen Rose in a highly paid cast that got more promotion than arguably any other show ESPN has launched in recent memory.

Get Up hasn’t even made it through six months and there are already significant challenges. Beadle has been moved off the program to focus on the NBA and the show has added a rotating list of college football and NFL analysts for football season. Most troublesome though is the fact that Get Up has lost an hour and been replaced by a generic episode of SportsCenter (like SC6) – an ominous sign for its future.

ESPN has a ping-pong history with how much they want to invest in personalities to drive their programming. Go back in the day and the network made people like Chris Berman, Dan Patrick, and Keith Olbermann into household names. Then it went through a phase where it didn’t want anyone to be bigger than the network. Now we’ve seen this back-and-forth play out once again in a very short period of time. Once personality driven programming was all the rage just a year or so ago, especially with SportsCenter. Now it seems that Van Pelt’s edition of SportsCenter is one of the few survivors while others are relegated to the history books or are on life support.

Maybe it says more to do about ESPN’s decision making at the top more than anything and trying to find the right fit for the right personality and the right audience. If you want to more loosely define the term, you can find “personality-driven programming” throughout ESPN’s daily lineup. Would First Take be the same shoutfest without Stephen A. Smith? Could anyone but Dan Le Batard (and Papi) make Highly Questionable work? Would PTI have nearly a 20 year run with anyone besides Michael Wilbon and Tony Kornheiser?

It all comes down to the fit between personality, show, and timeslot. There’s no doubt that SVP has found his niche and the personality-centric episode of SportsCenter at midnight eastern has been a success story. But when it comes to Get Up, has ESPN’s audience ever been craving a morning show? Maybe the concept is just a misguided idea from the start, no matter who is hosting and it is just Bristol trying to fit a square peg into a round hole? Similarly with The Six, perhaps ESPN went too far outside the lines in mismanaging Hill and Smith. Had ESPN either kept more traditional elements of SportsCenter or done something more with their already successful show of His & Hers, the pair would still be on ESPN airwaves today.

However with SC:SVP, it contains just enough elements of SportsCenter that it makes viewers feel comfortable and it features just enough of SVP’s personality to make it unique. Given Van Pelt’s years of experience on TV and radio and everywhere else at ESPN and elsewhere, it was the perfect marriage of timing and opportunity back in 2015. And it looks like it’s going to be a foundational element for ESPN’s lineup for a good number of years to come. It’s just a wonder why ESPN hasn’t been able to make another show work in the same way in recent times.