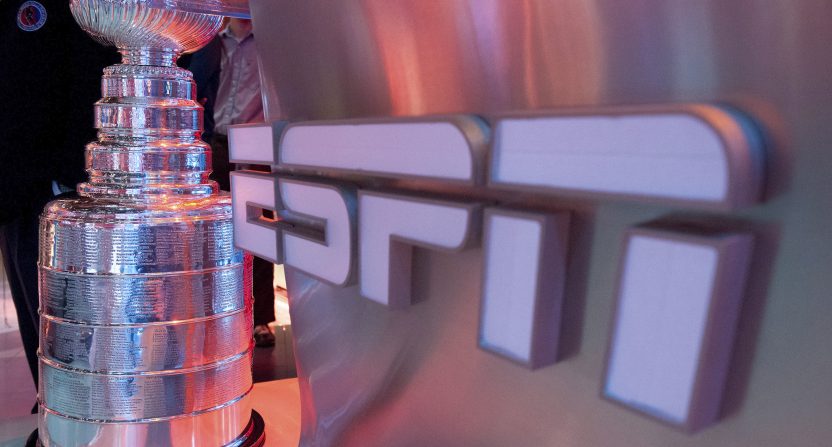 On Wednesday, ESPN and the NHL announced a new, wide-ranging TV deal which, among other details, would bring 25 exclusive regular season games to ABC or ESPN along with four Stanley Cup Finals and half of the playoffs over the next seven seasons.

There was plenty of enthusiasm for the new contract, along with some expected wariness and disappointment. And all these feeling are justified: there’s a lot to unpack in the deal, with clear benefits and drawbacks.

As with most contracts and agreements in the sports media landscape (and beyond), there are winners and losers to this deal. Here’s our best attempt at identifying them in this deal.

Winner: ESPN. This is an obvious one. ESPN wanted hockey back, and they got hockey back. The network adds the NHL to its busy winter calendar with the NBA, college basketball, and the ever-present UFC. Another championship event, the Stanley Cup Final, will be added to ESPN’s portfolio (airing on ABC), along with a litany of playoff games. The fact that this is also reportedly the NHL’s top package, rather than a secondary one, puts ESPN into prime position among the NHL’s TV partners. It’s also huge for ESPN to have rights deals with all of the “Big Four” (regardless of whether or not you think a Big Four still exists, but that’s another conversation), giving the network incentive to provide airtime to sports other than the NFL or NBA.

Loser: NBC Sports. NBC is still expected to be one of the NHL’s TV partners (though a deal hasn’t been announced quite yet), but this is still quite a blow after sticking with the NHL after all these years, through the good and the bad. While NBC would retain the Stanley Cup Final in alternating years and half the playoff series each year, it loses its status as the NHL’s main broadcast partner. Additionally, many of the NHL’s tentpole regular season events are also leaving NBC for ABC/ESPN in the new TV deal, including the Faceoff opening night games, the All-Star Game and Skills contest, and potentially (though not officially designated) the outdoor games as well.

Sure, NBC would still have some regular season games if they get a new TV deal done with the NHL, but with the impending shutdown of NBCSN, those games will be on Peacock, USA, or NBC proper rather than a sports-centric network like ESPN, ESPN2, or ESPN+. Given how tightly entwined the NHL was with NBCSN, it would almost be like starting over with the same TV partner.

Winner: The NHL. Duh. Of course the NHL is a winner: they’re getting a whole lot more money! While the specific rights fee wasn’t announced, it was reported that the NHL will be getting an average of $400 million a year from Disney. Their average rights fee under the previous deal with NBC is $200 million per year. That’s a sizable increase (even though Disney was already paying the NHL as part of the BAMTech sale – more on this later), and with a second TV package also up for grabs, the NHL will likely be in a position where they end up with a sizable increase in extra cash coming in.

Loser: Fox Sports. Did Fox actually want the NHL, as rumored? If so, they struck out, and their winter live content for the foreseeable future will be limited to college basketball and NASCAR post-Super Bowl. That leaves a whole lot of holes to fill, and Skip Bayless and Colin Cowherd can only fill so many hours of content per day. Fox has plenty of entertaining personalities and talented broadcasters, but how much does it matter if there aren’t marquee live events to draw viewers to the networks outside of NFL season?

Winner: Out of market fans. As part of the deal, the NHL’s out of market streaming package is moving onto ESPN+, with NHL.tv going the way of the dodo. ESPN+ is (currently, at least) cheaper for a full year than NHL.tv is for the season, meaning fans who want to watch out of market games will end up saving money while also getting access to a bunch of other content they may or may not be interested in.

Loser: Some in market fans. Sorry, folks: if you want to watch every one of your local team’s games this season, you’ll not only need a cable or satellite subscription to access your team’s RSN and ESPN, but you’ll also need a subscription to ESPN+ or Hulu. 75 games will be streaming exclusive in this TV deal, and while you previously got everything you needed with the cable sub, you now will need to jump into the streaming waters to see every game. I personally don’t think this is the worst thing in the world, but throwing up another paywall on games always rubs people the wrong way.

Winner: Nostalgia fans. This tweet from ESPN made me chuckle. Yes, the theme *is* awesome, but that’s a very small part of a much larger puzzle.

And yes, the theme music is back ? pic.twitter.com/6HSQiyKRGs

Loser: Nostalgia fans. While the NHL is returning to ESPN with the same music, it still might not sound the same. Long-time analyst Bill Clement retired earlier this year. John Davidson left broadcasting for the front office a decade and a half ago, and is currently the president of the New York Rangers. Gary Thorne, who will be 73 in June, expressed some interest in an interview with The Athletic, but reading between the lines, it sounds like if he did return, it wouldn’t be as the primary, full-time broadcaster for the NHL on ESPN and ABC. ESPN has plenty of options, both internal and external, for their regular NHL coverage, and more importantly, they have plenty of time to get all their ducks in a row. I wouldn’t freak out just because the broadcast crew is different from what it was two decades ago.

Winner: ESPN’s hockey-friendly employees. Regardless of how involved they’ll be with live game or studio coverage, this is a big day for people like John Buccigross, Linda Cohn, Emily Kaplan, Steve Levy, Barry Melrose, and Greg Wyshynski. ESPN getting back in the NHL game is not only good for the network, it’s good for the profiles of these employees (and anyone else they bring along for coverage). In the first month of the NHL season in the fall, Wyshynski alone might get more on-air facetime than in his entire career to date.

Jury’s still out: Debate shows and general programming. Are ESPN’s various debate and general talk shows going to talk about hockey now that the NHL is back in the fold? If not, it’ll seem like something of a slap in the face. If they do, and it’s awful, it’ll still seem like a slap in the face….but at least we’ll get some good content out of it. Yeah, it would be a trainwreck, but Stephen A. Smith loudly screaming about Andrei Vasilevskiy sounds more entertaining than 95% of embrace debate content.

Image via ESPN and the NHL.