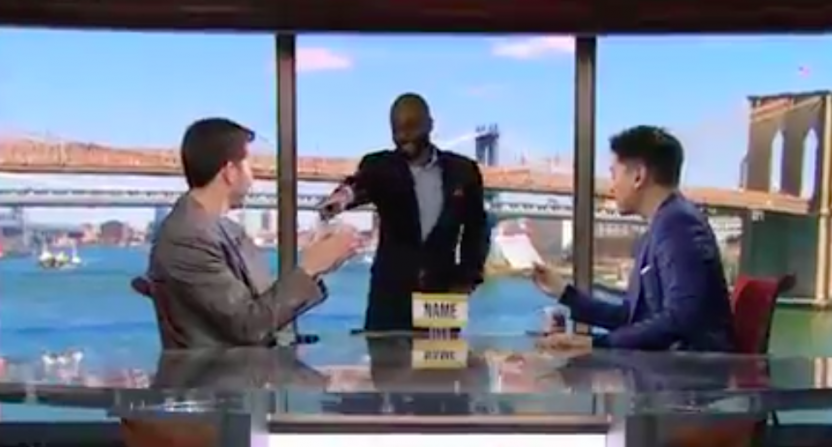 April Fool’s pranks are, for the most part, pretty sucky. They’re either not very funny or not very original or they actually end being kinda hurtful. April 1, 2019, came and went without too many people or brands out there doing too much to embarrass themselves. However, at least one April Fool’s prank today rose above to provide just enough satisfaction to warrant it’s existence.

As you probably know, ESPN’s “High Noon” is normally hosted by Bomani Jones and Pablo Torre. However, it seems Jones was not available to host Monday’s edition and ESPN radio and TV personality Will Cain was sitting in his seat instead. During the introductions, Torre tells Cain that he “needed a cohost and you are that cohost.” Cain seems genuinely excited about the opportunity, noting that he “always felt that you and I would be a really good show together.” He then goes on to point out that the name of the character in the movie “High Noon” is Will Kane, making this some kind of destined moment.

And that’s when Bomani popped out and said: “I got you!”

Massive thanks to @willcain for hosting @HIGHNOONonESPN with me today pic.twitter.com/bAjXSzqOFH

Confused, Cain asks, “What do you mean ‘you got me’?” before he realizes what the deal is. “Ah, the joke’s on me, huh.” Smiling, he slaps hands with Bomani, who lets Cain know “you still get paid.” And then it really starts to dawn on Cain what’s happening.  “So I’m really not doing the show?” he asks? Between Bomani and Pablo’s smiles and the laughter on the set, it all hits Cain at once and his smile fades very quickly.

Clearly unhappy, Cain walks off the set saying, “Next time you have me on you jerks won’t have me on as a joke.” Jones replies, “The next time they have you on will be the day I quit.”

To be fair, it’s reasonable to assume this was all a bit. Cain did end up sharing the video on Twitter so who knows. Though it does seem unlikely that Jones would actually want to hang out with Cain given some of his previously stated opinions and feelings. And that Bomani might enjoy embarrassing him on live television like this.

So if you want this to be real, by all means, believe it was real and enjoy it. No one is gonna stop you. Just like how Cain is probably never gonna actually host “High Noon.”

Update: Cain gleefully tweeted that he was indeed in on the bit and took exception to some of the coverage the prank got.

Help me out here guys. I’m beginning to think sports media is a little biased and WANTED this to be true. That couldn’t be, right? pic.twitter.com/2TWI0RBfNp