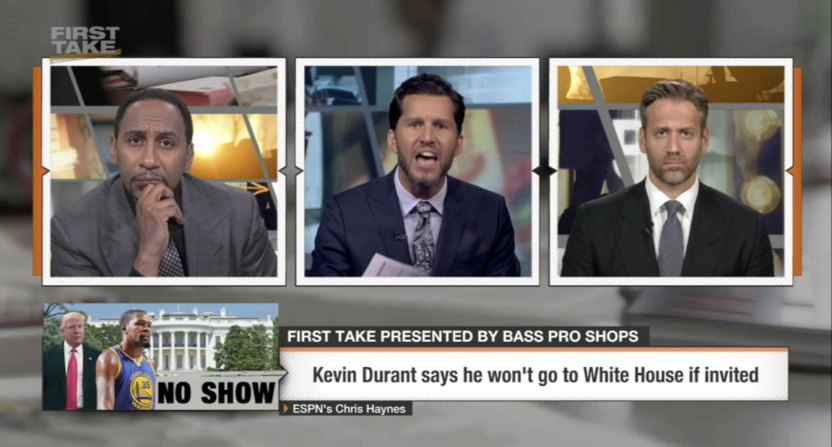 On Friday’s edition of First Take, Will Cain seemed to cut a WWE-style promo on Stephen A. Smith and Max Kellerman about Kevin Durant not respecting President Donald Trump and announcing he wouldn’t visit the White House.

After the events that transpired in Charlottesville, Virginia this past weekend, Durant said he wasn’t going to the White House when the Warriors visit President Donald Trump. Durant isn’t the first person to not go to the White House and excuses range from very legit scheduling conflicts to those reasons that may be a bit dubious.

For Durant, he made no bones about why he wasn’t going. It was because he didn’t respect the President of the United States because Durant feels Trump is fueling racism in the country by his actions, or lack thereof.

Stephen A. Smith flat-out refuted that, and even told Cain, “I don’t know what the hell came out of your mouth.” Smith disagreed that Durant is trying to make this a political issue and feels that it’s more a statement on Trump himself than it being a liberal or conservative issue. Smith saying that this wasn’t a liberal or conservative issue set Cain off and he really went off on Smith, Kellerman and anyone else within earshot.

For the sake of context, this is the extent of what transpired between the three.

Smith: “That would be you, go ahead.”

Kellerman: “None of those things occur.”

Cain: “I’m tired of you saying it’s moral vs. immoral. And Kevin Durant is on one side and all the immoral are on the other.”

Cain: “And in the process of you cloaking yourself in this clear morality that anyone that has even the slightest bit of nuance of disagreement with you, is somehow evil. In the process of you doing this preening, this peacocking on TV, you don’t hear a single word that somebody says to you.”

Cain: “When I say Kevin Durant has the right, and I compare it to Matt Birk doing it to Obama. Max, get out of here with I’m making moral equivalencies. You’re so addicted to the language of the last week that you made a BS comparison there. I didn’t say they were the same. Did I once say those are the same?”

Kellerman: “Why did you bring it up as an example, Will!”

Cain: [Points to chest] “Because I sell consistency, Max! That’s the difference. I’m not convenient.”

[All three speaking at the same time talking about consistency]

Cain: [Sarcastic] “Yeah, yeah, yeah, you’re right, Max. You know what I did? I wanted to come out here and draw a correlation, an equivalency between Barack Obama and Donald Trump. That’s exactly what I did.”

Kellerman: “You may have done so unwittingly.”

Cain: “You do such a good job of not listening to make the exact point you want to make which is a simplified reduction of anything into good vs. evil, moral vs. immoral.”

That wasn’t it. After Smith challenged, arguably in a rather condescending way, asking what Cain actually said.

Cain: “You know what, it’s not an insult to say “Please listen!” And I can’t believe that somehow you’re offended by me questioning your listening skills when you question the very morality of someone who disagrees with you. Yet you get to be offended. Here’s what I said, Kevin Durant has the right, everyone has the right, no one should have moral imperative to have to support anything they don’t support. I’ve consistently held that position from administration to administration.”

Cain: “I’m not done! From there it flows. Kevin Durant is making a decision I by the way do not inherently disagree with which I said in my exact statements when I opened up. Yes, I believe to some extent a line has been crossed for me, Max, but I don’t put moral imperatives on other people.”

Cain: “I don’t even know what you’re referencing now but I’m working my way through it when I said”

Kellerman: “I’d like to hear what Will was saying, he said “A line has been crossed.””

Cain: “On a personal level, Max, that you can make decisions for yourself which I honor and respect for Kevin Durant. It’s not necessarily one I have to mimic, nor is it one I have to require of other people, yet you do. And you say that those that don’t mirror your image, mirror your choices, are those that are immoral. And that’s where we draw the line.”

Well, first off, Cain should probably take his own advice about people hearing only what they want to hear when debating. And for someone who says that there is a growing divide, Cain is the one practically screaming at Smith and Kellerman and being rather unhinged. It’s a heated debate on a very serious issue and I might be frustrated if I was in Cain’s spot, but that doesn’t make it right.

You have a rare chance to be close to the President of the United States in front of the media and dozens of cameras. Isn’t that a perfect time to express your concerns with the President and try to have him answer for what he did, in front of the media? Even if Trump doesn’t say anything or walks away and ends the visit, that could be a pivotal moment that would be talked about everywhere. If the media isn’t going to get anything out of the man, maybe an NBA champion can.