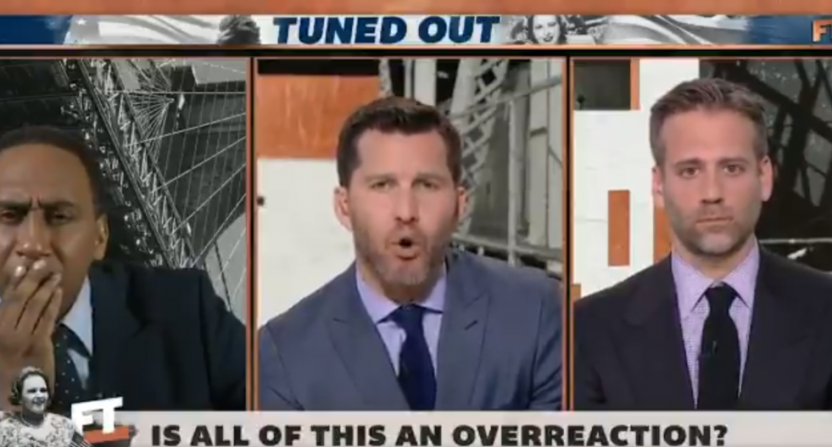 ESPN pundit Will Cain has created a whole lot of controversy over his since-2015 stint with the company, and he’s at it again. This time, Cain went on First Take Monday to argue with Stephen A. Smith and Max Kellerman, and claim that the Yankees and Flyers distancing themselves from Kate Smith (including no longer playing her version of God Bless America at games, and in the Flyers’ case, removing her statue) was “an overreaction.” That distancing came after discussions of Smith’s 1930s performances of songs like “That’s Why the Darkies Were Born” and “Pickaninnies’ Heaven,” which took a lot of heat for their comments on race. But Cain claimed on First Take that this is all going too far:

“It’s an absolute and utter fool’s errand to go back through history, decades, someone who’s been passed away for 30 years, incidents that occurred eight decades ago, and apply modern historical standards to something you can almost reach a century. I’m suggesting that your standard, yours, only requires a handful of people to be a little outraged to go back and tear statues down. And I’m telling you that by your standard, President Obama’s statues would not stand today when it comes to gay rights, and that is asinine.” Smith then points out that “That’s easy for you to say, because you’re not the offended party.” And the back and forth goes on from there.

Cain’s comments here have become a Twitter moment, and his position took a ton of heat from many First Take viewers on Twitter. It’s also been criticized by everyone from Mina Kimes to Robert Littal to Ron Clements. But this is just the latest outrage Cain has managed to stir up. Amongst other things, he’s previously been seen arguing with Smith about race and Tony Romo, blasting Kevin Durant for skipping a White House visit, asking if Kyrie Irving knows what “second banana” means, defending NFL teams for asking Derrius Guice if he was gay and if his mother was a prostitute, blasting Nike for signing a deal with Colin Kaepernick, debating entitlement and privilege with Stephen A., and comparing Antonio Brown to a suicide bomber.

It’s interesting to see Cain’s continued prominence at ESPN, as his main lines of commentary (or at least, commentary that gets any attention) seem to be on the societal and political issues that the network keeps saying they’re moving away from. But that’s his main focus; as Smith told Ben Strauss of The Washington Post last September, he prefers to debate social and political issues with Cain, because “If it’s a sports conversation, he can’t hang — it’s like a train running over somebody.” (We would like to point out for the record that the train of sports knowledge running over Cain here focused on the matchup of Hunter Henry and Derrick Johnson, claimed European players can come to the NBA at 17, and called Dwayne Haskins “more of a runner than a thrower.” So, you know, it’s not like that train’s unstoppable for people with actual sports knowledge.)

But on the political front, maybe the ESPN strategy isn’t so much “moving away from” as emphasizing that they have conservative pundits like Cain. Dan Le Batard said in 2017 that “the best way to climb” in today’s sports media was “being the thing that you think that ESPN won’t hire”, “Be the conservative sportswriter,” and specifically referencing Cain, saying “Will Cain—ESPN will be more likely to hire this person that you believe is not welcome at ESPN specifically because you believe that ESPN doesn’t have enough of them.” And last fall, ESPN president Jimmy Pitaro told Strauss “When I look at this topic — the criticism that we’re left-leaning — my job is to bring on people who have different thoughts. Will is a great example. . . . I feel like we’re pretty balanced right now.”

Well, Monday morning showed that ESPN can be balanced between “You shouldn’t disassociate yourself from people who did racist things, as long as they did them decades ago” and “Yes, you should.” And Cain’s also here to provide “balance” on other questions that didn’t really seem like much of a debate, like “Should Antonio Brown be compared to a suicide bomber?” and “Are NFL teams right to ask prospects if they’re gay?” We’ll see what “balance” he brings next.