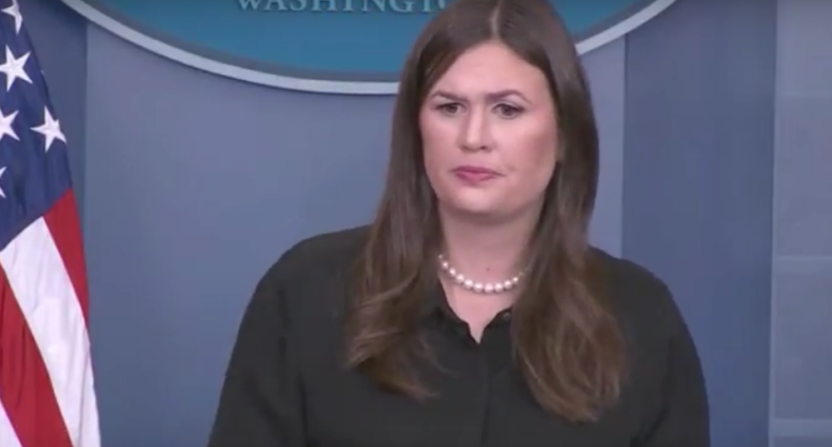 The firestorm following Jemele Hill’s tweets calling President Donald Trump “a white supremacist who has largely surrounded himself w/ other white supremacists,” “an unfit, bigoted, incompetent moron,” and “the most ignorant, offensive president of my lifetime” has now reached the White House itself.

ESPN issued a statement Tuesday that Hill’s tweets “do not represent the position of ESPN” and that “we have addressed this with Jemele and she recognizes that her actions were inappropriate,” Clay Travis and Jason Whitlock went on Fox News to rant about it, and then it was brought up during Wednesday’s White House press briefing, leading to press secretary Sarah Huckabee Sanders calling Hill’s comments “outrageous” and “a fireable offense”:

Sanders was asked if Trump was aware of the comments, and said “I’m not sure if he’s aware, but I think that’s one of the more outrageous comments that anyone could make, and certainly something that I think is a fireable offense by ESPN.”

Sanders was then asked why African-American figures like Hill would say that if Trump has been as clear as she suggested in condemning white supremacy, and said “I’m not going to speak for that individual, but I know that again the president has met with people like Senator Scott (Tim Scott, R-SC, the only African-American Republican senator) who are highly respected leaders in the African-American community. He’s committed to working with them to bring the country together. I think that’s where we need to be focused, not on outrageous statements like that one.”

As CNN’s Brian Stelter noted, the questions on Hill’s comments came from David Nakamura of The Washington Post, who previously worked as a sports reporter.

This comes a day after legislation to formally condemn the white supremacist rally in Charlottesville, Virginia passed in the House with bipartisan support (it previously passed in the Senate Monday). That resolution urges the president to “speak out against hate groups that espouse racism, extremism, xenophobia, anti-Semitism, and White supremacy” and “use all resources available to the President and the President’s Cabinet to address the growing prevalence of those hate groups in the United States.” Sanders also said on Wednesday that Trump would be signing the resolution once it’s placed on his desk.

Hill was on ESPN’s SC6 as normal Tuesday.