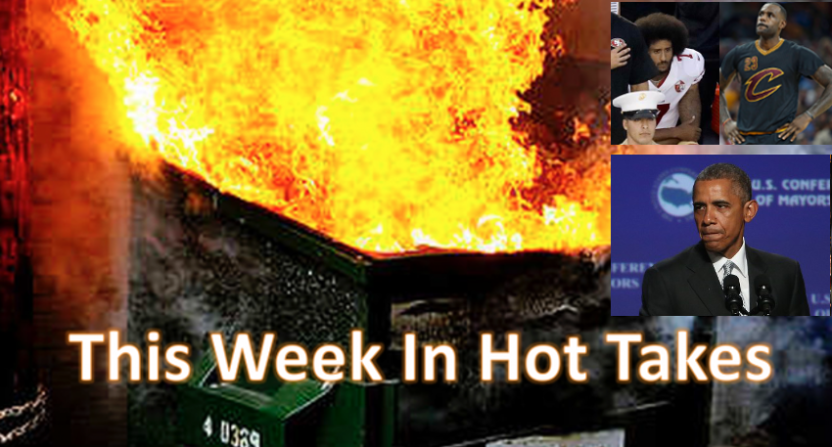 Welcome to another edition of This Week In Hot Takes! This time around, we’re looking at the hottest takes from sports media members from May 12-18.

5. Mac Engel calls Phil Mickelson a coward: One of the more interesting variations of “please like my sport” is “please like my local golf tournament,” and Engel displayed that nicely in the Fort Worth Star-Telegram this week. Engel wrote a piece Wednesday looking at the news that Phil Mickelson was returning to play Fort Worth’s Colonial Country Club (in this weefor the first time since 2010, and it was full of odd criticisms of Mickelson:

Despite winning the tournament twice, Phil was done with Colonial. Colonial wanted to be done with Phil.

The last time Phil was here was 2010. He left with his feelings clearly hurt. He missed the cut. Phil doesn’t miss cuts. Or he didn’t back then.

He didn’t care about the lengths to which the club had gone to make him feel special, most likely because most courses did the same thing. At that point he was used to red carpets in the showers and toilets at all of the clubs where he played, other than the ones at the British Open, the PGA and Augusta National.

“With the [course] redesign, I’m afraid I won’t be playing it [Colonial] anymore,” Phil said in 2011. “It doesn’t give me a power advantage. I know all the shotmakers will be there every year. But I don’t see any of the long hitters playing there anymore. There’s no decision-making now. It’s all irons, irons, irons.”

It was a tee-shot blast at course designer Keith Foster, and a tone-deaf comment about his own game. Phil sounded like a coward.

Look, “coward” feels like a bit much to lob at a golfer. Engel isn’t wrong to note that Mickelson was all sunshine and light about the course’s redesign while he was affiliated with the tournament sponsor, but choosing not to play a course that doesn’t particularly suit his game is no act of cowardice. And Mickelson’s far from alone there; lots of players choose to skip a variety of PGA Tour events for all sorts of reasons. It’s all about maximizing chances to win majors, and that doesn’t always translate into playing each and every week.

Also, Colonial trying to give Mickelson red-carpet treatment is both far from unique (as Engel correctly notes), and far from selfless. Tournaments need big names like Mickelson more than the big names need them, so catering to the stars is one way to try and get them to come, but it’s far from a guarantee; someone’s not necessarily going to play a tournament they would otherwise have skipped just because you were nice to them. Mickelson can choose to play or not play in whatever tournaments he wants; calling him a coward for skipping one is a hot take.

4. Kristine Leahy says LaVar Ball threatened her, says he shouldn’t be allowed back on FS1: LaVar Ball’s trainwreck of an interview on The Herd Wednesday created plenty of fallout, but some of the oddest comments about it came from co-host Kristine Leahy. On Wednesday’s Speak For Yourself, Leahy said “You can’t come at me, and disrespect me, and not look me in the eye, and threaten me. That’s not OK”:

.@KristineLeahy responds to LaVar Ball’s comments to her today on The Herd. pic.twitter.com/r813z4ZxPn

“Threaten” is a heck of a stretch there. Yes, Ball was incredibly rude and unprofessional towards Leahy, but there didn’t seem to be anything threatening her physical well-being or her job. (“Stay in your lane” could maybe be interpreted that way, and it’s certainly sexist, but it’s not really a threat as much as him refusing to deal with her questions and criticisms; that’s still problematic for a guest on a talk show, but it’s not really threatening.) And consider what Leahy then said Thursday on The Herd:

“I hope that yesterday showed who he is and that we stop putting him on all of these networks just to get controversial statements out of him because that is potentially what could happen. And I think there’s no place for that in TV, no matter what kind of ratings you’re going to get.”

Oh, really? FS1’s whole existence is based on getting controversial statements (why this incident is such a gold mine for them), as you can see from how frequently their personalities feature in this column and how they gave Ball eight TV appearances and 105 promotional tweets over the last two months. And Leahy has made plenty of those controversial statements herself, including bashing Ball and his parenting abilities. Isn’t that coming at him and disrespecting him? It’s also interesting that she changed her tune if Ball should be allowed back overnight.

In any case, Fox is certainly welcome to ban Ball if they want. His appearances don’t provide any real insight or value to the viewer, and there’s no dispute that he behaved particularly poorly this time around, and that he shouldn’t have made the comments he did to Leahy. It’s also unfortunate that this has reportedly led to death threats against Leahy; that should never happen. But Leahy’s outrage about being “disrespected” by Ball after she did so much previously to disrespect him feels a bit much, as does her claim that he threatened her.

"I have to say that Zaza Pachulia is now the MVP of the playoffs… he saved LeBron James from the San Antonio Spurs." — @RealSkipBayless pic.twitter.com/NDkksXiFo2

The list of teams Bayless thinks can beat LeBron James continues to grow, with the San Antonio Spurs (pre-Kawhi Leonard injury) being added this week. Previously, he argued that Rajon Rondo’s Bulls could have beaten James’ Cavaliers, or even the non-playoff Miami Heat. Both of those seem highly unlikely; consider how the Bulls lost to the Celtics, and how badly James and the Cavs thumped that Boston team in Game One. The Spurs might have had a bit more merit to it, but they were heavy underdogs against the Warriors even with Leonard. But this is just one more way for Bayless to rant about LeBron and diminish his accomplishments for no particular reason, something Bayless has made a lucrative career of doing.

"This dude doesn't sound tough enough or man enough for the game of football." — @WhitlockJason on Colin Kaepernick pic.twitter.com/20KtYmIg0x

The sheer irony of Cowherd telling anyone else what to talk about is up there (this is the man who’s spent his own airtime ragging on everything from Iowa’s football schedule to John Wall’s maturity to the Dominican Republic’s education system to the Midwest’s economic job base, generally with nothing to back him up), but saying that Kaepernick not constantly commenting on football proves he doesn’t love it or isn’t good at it is insane. By that logic, does Rob Gronkowski not love football thanks to his other interests? Do Tom Brady’s Uggs commercials diminish his love for football? Athletes are not required to only talk about their sport, and it would be an awfully boring world if they did. And they’re better-equipped to talk about most subjects than Cowherd is.

1. Stephen A. Smith thinks President Obama didn’t solve Chicago’s gun issues thanks to Rahm Emanuel: Amazingly, the majority of Smith’s hour-long appearance on Fox News Thursday had him looking relatively thoughtful and considered next to his fellow panelists, a sharp difference from his usual outings on ESPN’s First Take. He even pushed back against suggestions that The Washington Post and The New York Times are “fake news.” But his comments on gun violence in Chicago, President Obama and mayor Rahm Emanuel certainly qualify as a hot take:

“To me, when I hear the name Rahm Emanuel, what hits home for me is President Barack Obama. The one thing that I have had an issue with, and you can debate whatever, y’all can do that another day, for me personally, being an African-American, seeing the crime that has been raking through certain parts of Chicago, I’m not saying that our former president didn’t say anything, but I always found myself wishing that I heard more, and I always suspected that I didn’t hear more as it pertained to that issue because Rahm Emanuel, his former chief of staff, was the mayor. When I hear the name Rahm Emanuel, that is what comes to my mind, the crime that exists in Chicago, what little has been done to address it. And we have a mayor that is there, and I thought he was in a position to do so much more because of what he was connected to. And it didn’t happen.”

What more in particular would you have liked to hear, Stephen? Maybe a whole town hall dedicated to the issue, which was aired on ABC and simulcast on ESPN, the network you happen to work for when you’re not being a Fox News talking head? Look, the violence in Chicago is unquestionably a problem, and there doesn’t appear to be any easy solution. Perhaps the federal government could have taken different measures; that’s a policy debate, and that’s fair. There could be all sorts of discussion of the roles of federal, state and municipal governments and their leaders in addressing issues like this. But suggesting that Obama somehow ignored the issue (which he didn’t) because Emanuel was the mayor feels pretty ludicrous.

Notable absences: Phil Mushnick (nearly made it for this take on Jose Fernandez’s statue), Shannon Sharpe, JT The Brick.