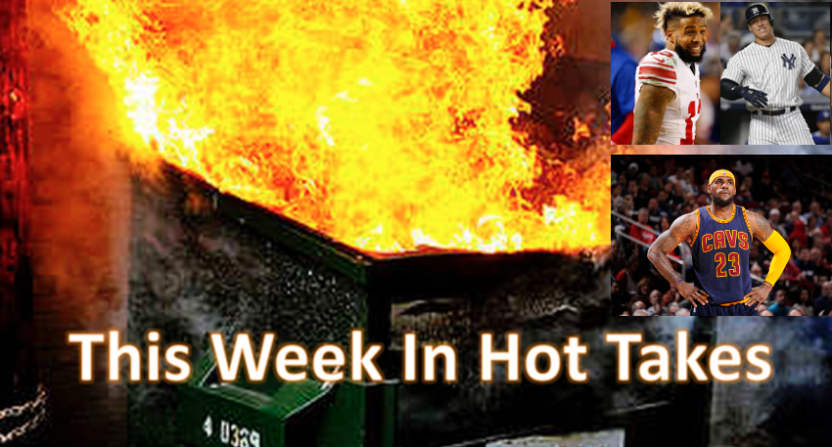 Thanks for joining us for another edition of This Week In Hot Takes! Here’s a breakdown of the hottest takes from sports media members from July 21-27.

5.  Amin Elhassan rants about golf, for some reason: ESPN NBA analyst Amin Elhassan has a long history of some unusual behavior, from picking a fight with now-colleague Adrian Wojnarowski back in 2014 (and getting roasted) to a perhaps-staged walkoff of his ESPN Radio show during Super Bowl week in 2016, and he’s known for some Twitter trolling as well (he used to have #HateHard in his bio, and has a pinned tweet from two years ago that “Your tears are like PEDs to me“). This past weekend, he went all #PleaseLikeMySport by delivering a bunch of criticisms of golf for an hour during the British Open, then did the same on Monday’s SportsNation.

Watching golf is like watching someone else's lazy afternoon.

This might be the best description: ultimate fantasy camp for losers on their couches. https://t.co/gfuLxI2cJS

How many of those sports has ppl defending it by constantly bringing up how "difficult" it is. I'll hang up & listen https://t.co/XzZZWmDBfB

You forgot Step 3: watch ppl cry about it in your mentions. You're welcome for the klout score boost I just gave you https://t.co/WaJsNNJrS6

He even made fun of colleague Rachel Nichols talking about Jordan Speith’s performance being impressive given his youth:

No one’s making Elhassan like, watch or analyze (thankfully) golf, but spending hours ripping a sport like this is a bit weird, as is calling golf viewers “losers on their couches.”

4. Matt Burke says a day of a WEEI morning show is more valuable than a week of Red Sox games: As per his Twitter bio, Burke is the “executive sports editor & columnist at Metro media/newspapers,” the international chain of free dailies. That bio also mentions him being “Boston-based. Mass-raised,” which probably goes to explain why he’s writing about the WEEI/Red Sox fight. And the amazing thing there? Burke argues that Kirk Minihane, the host who called Red Sox owners and executives “pandering vomits”  and was then asked to start his vacation early, gets more listeners on WEEI in a day than a week of Red Sox broadcasts does:

The suspension, or whatever you want to call it, is incredible considering that the Red Sox do not own WEEI. WEEI merely broadcasts Sox games on radio. No one but your 82-year-old Great Uncle Jack listens to baseball on a transistor, and it’s a good bet that Minihane’s “Kirk & Callahan Show” pulls in more listeners in a day than Sox games do on 93.7 in a week.

In other words, WEEI would survive without Red Sox games on its airwaves. In 1967 or even 2007 that might not be the case – but that’s for sure today. No one cares about the “flagship” nonsense.

Yeah, there’s plenty of color that Minihane added in the above lashing, but the main point that the Red Sox owners are “panderers” is as accurate as calling the Green Monster green.

That seems highly, highly unlikely, especially considering that there are multiple morning shows competing for listeners in the Boston market, and that plenty of people beyond “82-year-old Great Uncle Jack” listen to baseball games. Yes, not as many as there used to be, which is why last year’s extension of the team’s deal with WEEI is for around $15 million a season rather than the $20 million per year they paid from 2006-2016, but that’s still a big chunk of change. And much more than Minihane is paid, presumably. Live sports rights matter, which is why media outlets still pay for them. Talking heads are much more replaceable, as Minihane himself would know (he only got the morning gig after John Dennis stepped down last year). It’s perhaps possible that a day of Kirk and Callahan occasionally beats a Red Sox game, but one day beating a whole week of MLB broadcasts? Come on. The “flagship” nonsense is much more important to the station (as seen by what they’re spending on it) than any host, and while it’s unlikely they’re going to really go against Minihane for his opinions (even this early vacation was carefully coded as “not a suspension”), they also probably don’t need to; the Red Sox presumably aren’t mad enough to turn down $15 million a year through 2023. But suggesting that the station should value Minihane more than their broadcast rights is insane.

3. Phil Mushnick says Aaron Judge’s humility goes against “what ESPN and Nike determined, to our sustaining detriment, to be the bad-dude standard for attention and adulation”: New York Post columnist Mushnick has regularly railed against baseball players not running hard to first on obvious outs or home runs, NFL players’ touchdown celebrations, basketball players’ dunks and other things that the rest of the world generally doesn’t have a problem with, but that he sees as selfish individualism. He took it to a new level this week, ranting about how great Aaron Judge is not for his baseball skills, but because he runs hard to first, and how that somehow defies a ESPN/Nike model and is more admirable than what other talented athletes do.

We love his unapologetic humility and dignity, the kind sacrificed years ago to what ESPN and Nike determined, to our sustaining detriment, to be the bad-dude standard for attention and adulation. Judge betrays that lie.

Where are those media who bash and ridicule “purists” and “traditionalists” for living life in the past lane — grumpy old men stewing in their obsolete juices — on Judge? Why haven’t they condemned Judge for playing humble, old-fangled, winning baseball? How has Judge been able to return us to a place he has never been?

Or is it that the new-age hip — aka, panderers — love what they see from Judge, too? Might they be closeted traditionalists who for years were afraid to risk the wrath of fools?

Mushnick’s completely missing the point here; those who disagree with him aren’t generally criticizing players who run hard to first, they’re pointing out that it’s extraneous to success as a baseball player. So there’s no particular reason to blast Judge for doing that, and the praise of him is because he’s actually good at baseball, not because he wastes energy running after hitting a home run. It’s not the worst of Mushnick’s takes (we’d put this 2013 column on Adrian Peterson up there, or his unnecessary shots at Erin Andrews’ wardrobe from that year, or his 2016 take on Colin Kaepernick, or his rant about Mike Francesa last month), but it’s a pretty ludicrous one, especially when it comes to his conspiracy theory that ESPN and Nike “sell bad-is-cool.” No, they tend to sell successful athletes, and celebrating a touchdown, dunking a basketball or not hustling to first doesn’t make you “bad.”

2. Gary Myers compares Odell Beckham Jr. to athletes with substance-abuse issues: Speaking of bad takes from New York columnists, here’s Myers of The New York Daily News with a piece titled “Open Letter to Odell Beckham: We’ve seen too many talents wasted in New York — don’t be the next one.” And yes, it compares Beckham’s touchdown celebrations and complaints about being one of the league’s lower-paid receivers to a ton of athletes who ran into substance abuse issues, something that has never come up for Beckham. Here are the lowlights:

We have seen this movie before in New York when the next great thing in sports captivates the city, loves the spotlight a little too much, and it never ends pretty.

Doc Gooden and Darryl Strawberry would have been Mets for life and in the Hall of Fame if they didn’t succumb to the temptation of drugs and throw their careers into a living hell. Lawrence Taylor, despite his cocaine addiction, still managed to be the greatest defensive player in NFL history, but imagine how much greater he might have been if he took care of himself and how his post-football life might not have included so many days in the courtroom.

…Here’s the issue: You have yet to prove you are all grown up. Maturity was the mandate from GM Jerry Reese after you beat up the wall outside the locker room at Lambeau Field following the worst game of your career in the playoffs in Green Bay. By the way, was it really smart to come out in the pre-game warmups with no shirt when the wind chill was four degrees? Come on, you can catch pneumonia.

Also, how do you make all those acrobatic catches in warmups every week and then drop an easy TD in the end zone in the first quarter before your hands have enough time to get numb?

The drug references are ludicrous, and so is the rest of this. A columnist who writes this crap can hardly be seen as an expert on “maturity,” and it seems unlikely Myers knows much about just how hard it is to catch a touchdown in a NFL game (and how different it is from warmups). Myers might know more about pneumonia, but Beckham didn’t catch it, so that’s a wasted argument too. For what it’s worth, Myers tried to walk this back after getting blasted on Twitter, but he didn’t really succeed:

To clarify. OBJ never been in trouble and I used examples of Doc, Darryl, LT, Harvey and Revis to show success can be difficult to handle.

1. Stephen A. Smith loses his mind on LeBron: Smith had quite the feud with LeBron James this week, first reporting that sources told him James was mad at Kyrie Irving and wanted “to beat his ass,” but then taking it to another level after James questioned that report:

“There are moments when a professional athlete literally tempts you to go nuclear. And I stand here before you today right in that zone when it comes to LeBron James. Ladies and genetlemen, LeBron James sent out a tweet about me, responding to SLAM Magazine, talking about ‘Not facts, people! Boo! Get another source.’ He’s talking about me, he’s talking about what I reported. WHAT I REPORTED IS THAT IF LEBRON JAMES WAS IN FRONT OF KYRIE IRVING, I WAS TOLD, QUOTE , HE WOULD BE TEMPTED TO WHOOP HIS ASS! THAT’S WHAT WAS TOLD TO ME! I DID NOT SPECULATE! I DID NOT SPECULATE, I DID NOT PUT THAT OUT THERE, IT WAS TOLD TO ME IN THAT MANNER! VERBATIM! TEMPTED!”

Uh, you did put that out there. And this isn’t really a defense of you just repeating what you heard. But it’s amazing that ESPN’s studios survived the fallout from Smith literally going nuclear. 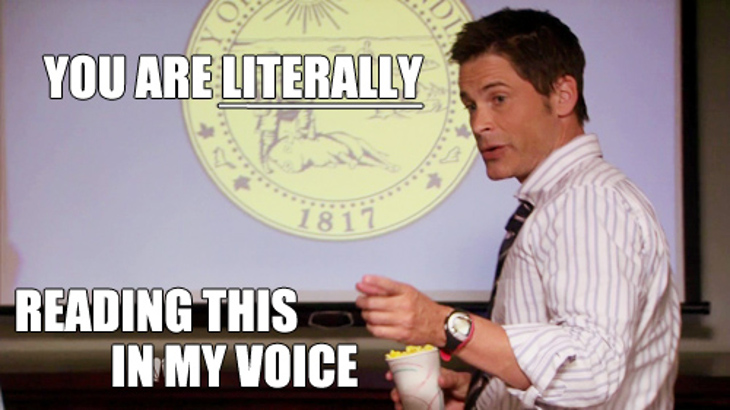 It’s also far from the first time Smith has gone in on an athlete who questioned his reporting, and done so in threatening style:

Honorable mention: Skip Bayless for first saying Cleveland was the perfect spot for Derrick Rose, then calling Rose a “headcase” in the same day:

Did Skip forget what he said this morning? (THX @smitty1894!!!) pic.twitter.com/4qVHc5gKgZ

Notable absences: Bayless and Colin Cowherd. This might be this column’s first week ever without any Fox personalities. Step up that take level, Fox!