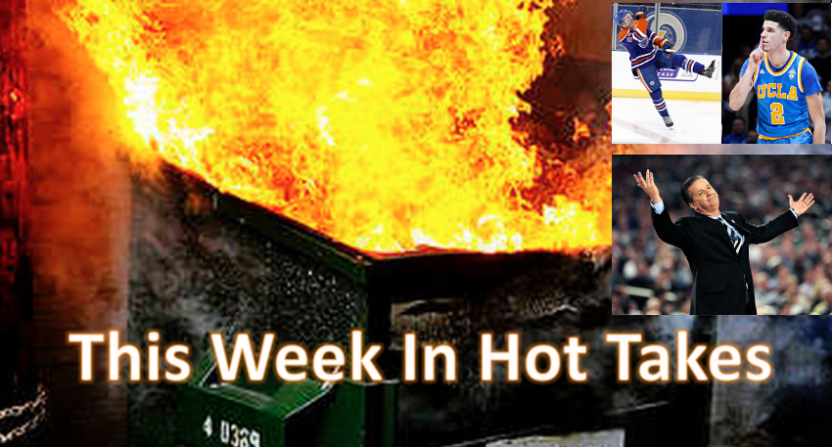 Welcome to another edition of This Week In Hot Takes. Here’s a look at the hottest sports media takes from March 24-30.

5. Gary Parrish uses preseason top four against John Calipari: Kentucky’s Elite Eight loss to North Carolina Saturday sparked plenty of criticism of Wildcats’ coach John Calipari. One of the silliest criticisms came from CBS’ Gary Parrish, who tried to say that Calipari should have made more Final Fours at Kentucky because of…preseason rankings?

John Calipari has had a preseason top-four team seven times at Kentucky. He’s fallen short of the Final Four in four of those seven seasons.

ESPN Louisville’s Jason Anderson pointed out that this stat actually favors Calipari over everyone else:

Yeah, not such a great take there, Gary. Making the Final Four is incredibly hard, and preseason rankings are notoriously inaccurate. Three out of seven is actually a pretty great percentage there.

Well, it’s led to South Carolina being in the SEC (since 1991) and making way more than they would have in the ACC. Ryan went on to say he wasn’t talking about money, though:

You guys are talking money. I understand the business. I'm talking common sense. And why So Car left. It wasn't about the $$$ then.

What “common sense” keeps South Carolina in the ACC, though? They left over arguments about recruiting restrictions, and what they saw as North Carolina schools dominating the conference. They eventually found a conference that makes just as much sense geographically, if not more, and one that’s much better from TV and financial perspectives. Ryan’s only real argument (apart from his coverage of Boston College) may be that it took a while for the Gamecocks to find their footing, but even that keeps it far from being the dumbest realignment move. And even Ryan himself eventually agreed to disagree with all the people criticizing him.

Truce? If you Gamecocks are happy with your SEC football $$, fine. In a better world, you'd still be in The ACC. Enjoy the Final Four ride!

3. Robert Tychkowski bashes Blue Jays’ celebration, says Oilers won’t copy it: We go north of the border for some “please like my sport” action here (which does seem to come up most often with hockey), as Tychkowski delivered a whopper of a take in The Edmonton Sun Monday. He argued that the Oilers are going to be reserved when they clinch their first playoff berth in 11 years, unlike those frivolous Blue Jays:

Do not expect the Edmonton Oilers to go totally off the deep end like the Toronto Blue Jays did when they last clinched a playoff spot – dancing around in ski goggles and champagne like they won the World Series and cured cancer on the same day.

The Oilers’ celebration will be understated and reserved, as it should be, when they make it official, either Tuesday night against the LA Kings or later in the week.

Tychowski should probably realize that different sports have different traditions, that only 10 teams make the MLB playoffs, and that champagne celebrations at each step are important in baseball. But sure, just say that those are “totally off the deep end” and joyless hockey clinching is “as it should be.”

2. Jason McIntyre blames LaVar Ball for UCLA’s loss to Kentucky: It’s apparently not just Kentucky that gets yelled at for underachieving, as Jason McIntyre delivered a whopper of a take on Fox Sports Radio this past weekend after Lonzo Ball and UCLA lost to the Wildcats in the Sweet 16. McIntyre blamed someone who wasn’t coaching or playing; Lonzo’s father LaVar.

There’s 10 whole minutes of terrible takes to listen to there, but the key line comes at 4:55: “His son got embarrassed last night on national television because of what his father did.” Correlation does not equal causation.

1. Stephen A. Smith says John Calipari has underachieved: The Final Four always leads to some hot takes, as people go nuts over how teams do in small sample size elimination games, but Stephen A. delivered the hottest this time around. Here’s him weighing in on Calipari’s supposed lack of championships:

“When I look at you coaching 25 years, a quarter of a century in college basketball, with All-Americans and first-round draft picks and one and dones, I would expect more than one title!” well, first off, as Max Kellerman notes, drawing conclusions based off a single-elimination tournament is problematic. (Smith’s ESPN colleague Eamonn Brennan had an excellent piece on that point this week.) Beyond that, Calipari has reached six Final Fours (even if two were later vacated), and he’s won a title (recently, in 2012), so even by tournament-only standards, he’s done pretty well. Kellerman points out at the end that Smith would be fine with Calipari’s recent record if it was anyone else’s, and Smith even admits that.