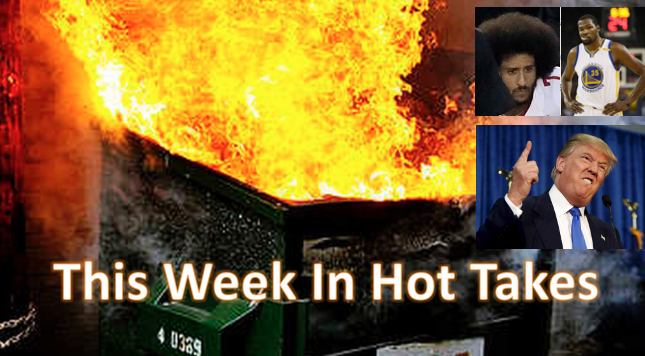 Welcome to another edition of This Week In Hot Takes! Here are the most fiery takes from sports media figures for the week of Jan. 27-Feb. 2.

5. Donovan McNabb says Texans’ and Falcons’ offenses “are very similar”: After losing jobs with Fox and NBC Sports Radio over a DUI arrest, McNabb landed on ESPN Radio this year, and that’s apparently led to him making appearances on other ESPN shows, such as this one on First Take Monday where he said the Falcons’ offense is “very similar” to that of the Houston Texans:

McNabb’s apparent basis for this comparison is that both teams have talented receivers. There aren’t many schematic similarities, though, and receiver talent alone doesn’t seem to be enough of a reason to put the top scoring offense in the NFL (Atlanta, 34.4 points per game) with the 28th-ranked one (Houston, 17.9 points per game). The shot of a seemingly-stunned Max Kellerman here is fun.

4. Skip Bayless says LeBron James is “coming unglued psychologically”: There’s been plenty of drama around LeBron this week, with NBA on TNT analyst Charles Barkley’s original take (which we sadly didn’t see before last week’s column) that James’ comments about wanting more help were “inappropriate and whiny,” James firing back with personal shots at Barkley, and Barkley defending his comments both off and on the air. The hottest take of all in this mess may have come from long-time LeBron adversary Skip Bayless on FS1’s Undisputed, though:

3. Stephen A. Smith says Durant ruined this NBA season: While Bayless can be relied upon for his hot takes on LeBron, his former debate partner is much more concerned with Kevin Durant. Smith threatened Durant on air last year and went off on him signing with the Warriors, and he’s been ranting about Durant “riding coattails” and the supposed anti-competitive effects of that signing all year, including last week’s delightful complaints about how Durant made Stephen A.’s job hard because of travel and blowouts. Now, Smith has gone even further, saying Durant ruined this season because he’s too good:

While calling journalists “assholes” for asking Tom Brady about Donald Trump is fiery enough, it’s the Kaepernick comments that are really something:

“He’d be a complete unknown without the game of football, without the sport he’s playing. And not to respect that, you’ve got to be a pretty unintelligent person, I would think.”

Yeah, let’s just lob “unintelligent” at a black quarterback. That will go over well.

1. Kyle Turley says Donald Trump is “the poster boy for Alzheimer’s disease: Turley, the former NFL offensive lineman, isn’t a regular sports media figure, but he went on ESPN’s Outside The Lines this week and delivered one of the hottest takes we’ve ever seen. It’s a weird world when the top hot take comes from OTL, rather than a debate show, but this one is fully deserving:

Here’s a transcript of that Turley exchange with Bob Ley:

Turley: “Donald Trump is the poster boy for Alzheimer’s disease, okay? He has early onset of Alzheimer’s disease. And it is starting to show.”
Ley: “Well, we don’t know that.”
Turley; “I know that!”
Ley: “Okay.”
Turley: “Because it starts at the age of 65 naturally. And what he’s doing is totally erratic.”
Ley: “All right.”
Turley: “And his decisions and the way he talks and the way he speaks is not presidential. And I want more than anything for him to do that.”

Emphatically and specifically stating on air that the president of the United States has Alzheimer’s disease without providing any proof is one of the hottest takes in the history of this column.

Notable absences: Clay Travis, Phil Mushnick, Shannon Sharpe. We have a new leader, with Stephen A. rising to the top!