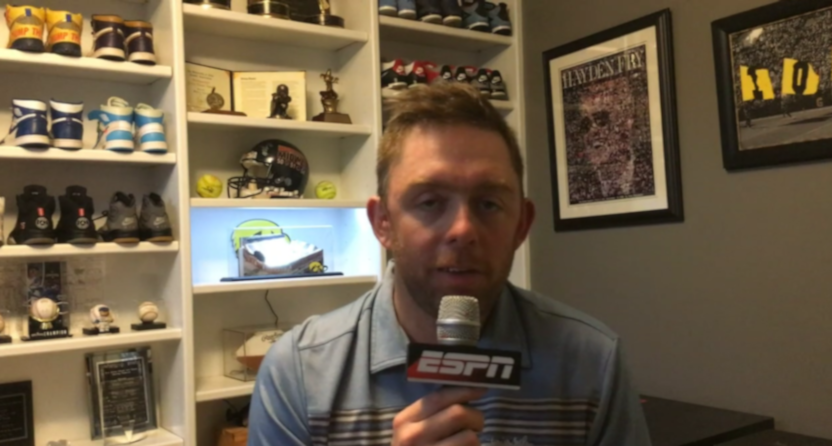 The big waves of ESPN layoffs (November 2020, November 2017, April 2017) get much of the attention, but the company has also often regularly parted ways with notable and long-tenured employees in between those big waves. And they’ve sometimes done so in surprising fashion, moving on from some employees almost instantly. The latest case in point there is writer Wayne Drehs, who had been working for ESPN for more than two decades, but suddenly found out Thursday that it was his last day:

A bit of personal news. Isn't that how this is supposed to go? After more than 20 years today unexpectedly became my last day at ESPN. It's been one hell of a run. pic.twitter.com/2Q2TmlqLKd

Last month’s ESPN layoffs hit a lot of writers and editors, including Claire Smith and Ivan Maisel. And the company has been changing their approach to written content significantly over the last two years, ending ESPN The Magazine as of September 2019 and moving much of the content from many of their remaining writers behind the ESPN+ paywall this year. So this fits into some larger trends at ESPN. But it’s somewhat unusual to see them let go such a long-established writer outside of a larger wave of layoffs, and to see them do so effective immediately (by contrast, Maisel, for example, tweeted that he would be writing for ESPN through the end of his contract in January).

Drehs, a three-time Sports Emmy winner, has covered a wide variety of subjects for ESPN over the years, and done so very well A few examples of that; last month, he wrote a detailed article on Nick Foles’ ups and downs, in July, he covered how Olympians were training without the Tokyo Olympics, and in February 2019, he wrote a magazine feature on Rob Mendez, the high school coach born without arms or legs. (Mendez received the Jimmy V Award later in 2019.)

Drehs has also shown a knack for writing about stories involving himself, always a difficult thing to do. In May, he wrote about his experience attending Michael Jordan’s basketball camp as a 12-year-old and playing one-on-one against MJ. In 2016, he wrote about putting off open-heart surgery until after the World Series. Here’s a video from May of Drehs discussing his old one-on-one game against Jordan:

Drehs’ work regularly appeared in our old monthly roundups of the best sportswriting out there. He’s long been a versatile writer able to illuminate a range of sports and stories, and his thoroughness and attention to story construction is always appreciated. He’ll be missed at ESPN, and we look forward to seeing what’s next for him.

[Wayne Drehs on Twitter; image from this ESPN video from May]