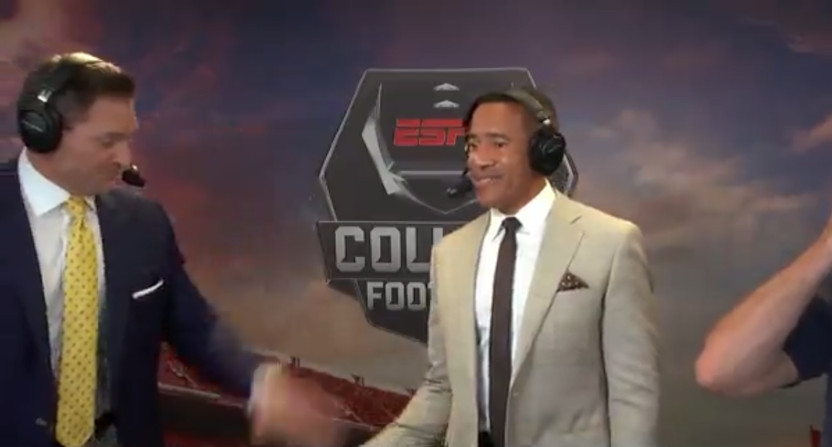 The Virginia Tech Hokies-Miami Hurricanes game Saturday on ESPN was wild on a lot of levels, with Virginia Tech running out to a 28-0 lead, Miami striking back on a Hail Mary just before the end of the first half, the Hurricanes pushing back to tie the game at 35 in the fourth quarter, the Hokies then scoring again, and Miami getting a couple of chances to tie or win themselves. And one of those chances came after ESPN cut away to go to Georgia-Tennessee, thinking the game was over. Here’s how that played out; first, what looked like the final play from the 10-yard line with five seconds left.

The pass fell incomplete, and ESPN play-by-play commentator Mark Jones called “Tipped up, incomplete, ballgame Hokies!” But Jones quickly recognized that Hurricanes’ coach Manny Diaz was calling for an extra second, and said “The clock shows zero, but hold on, Manny Diaz says there’s a second remaining.” Analyst Dusty Dvoracek then says “I think there was, they went to Brevin Jordan on a post, looks like Reggie Floyd was able to tip the ball away…” And the referee then announces “That’s the end of the game,” and Jones says “Oh, no. Okay.” So you’d think that would be it. However, just as ESPN was showing images of the coaches walking off and Jones was wrapping up a quick throw to No. 3 Georgia’s game against Tennessee (which was already underway, having started on ESPN2), things went wild:

Jones says “It’s over! [Quarterback Hendon] Hooker, the lunch pail, leave Miami Gardens with a win, 42-35. For Olivia Dekker, Dusty Dvoracek and our entire crew, I’m Mark Jones. The Hokies get their first conference win of the year.” Dvoracek then says “Oh, hang on!” and the feed then cuts to Tennessee-Georgia announcers Sean McDonough and Todd Blackledge, who also seem somewhat surprised by the transition. A few minutes later, ESPN went to a studio update, with McDonough saying “We have a development back in Miami, so let’s send you back to Matt Barrie”:

Barrie then describes how they put a second back on the clock, and shows the play Miami ran, which also fell incomplete, ending the game with a 42-35 Virginia Tech win. That play also featured Jones and Dvoracek commenting on it, but it’s unclear if that actually was seen live by anyone (it’s possible it was seen by people who were specifically watching the VT-Miami game on the ESPN app, as long as they didn’t end that feed too).

Ultimately, ESPN reacted to a complicated situation reasonably well, as the studio update came quite quickly in the Georgia-Tennessee game (and fortunately, there was a logical spot for that after a touchdown and extra point, so it didn’t feel disruptive there). And they didn’t jump after just speculation that the game was over; they jumped after the referee literally saying “That’s the end of the game.” It’s also understandable why they were eager to get to an anticipated Georgia-Tennessee game that was already underway. However, a little more patience on shifting the feed would have helped here, and would have avoided the awkward “Oh, hang on!” and viewers missing seeing the end of the game live. And viewers upset over missing the final play of their game thanks to ESPN’s decision to switch feeds here have some grounds for complaint.

Oddly enough, that wasn’t the only ESPN broadcast element people complained about in this game. The broadcast made the decision to show a replay of the Hail Mary with a look at the announcing booth camera, which showed analyst Dusty Dvoracek high-fiving play-by-play commentator Mark Jones. That prompted some criticism, especially from Virginia Tech fans. First, here’s the play as ESPN showed it live:

Much later in the game, ESPN showed this replay with a camera of on the broadcast booth, which showed Jones getting into his “Touchdown! Miracle Miami!” call, and more controversially, showed Dvoracek reaching out to him for a high five (which Jones gave) afterwards:

There’s nothing necessarily wrong with that. The high five very well could be in celebration of an impressive call from Jones under tough circumstances (and it was a difficult one, with the ball getting tipped; he correctly identified what happened, and did so quickly). It also could be in celebration of the game they’re calling getting much more interesting than the 28-0 blowout it looked like pre-Hail Mary. However, a high five like that can also be seen as announcer bias, and that’s the complaint many levied here.

1st Hail Mary I’ve ever seen live in all my life being around football, let alone in a game Im calling.I get excited when I call a game.Especially when big plays happen.I’m not gonna apologize for that. Congrats to @HokiesFB on the win.The venom coming my way hurts and is trash https://t.co/HORfBFLlu8

But a lot of people didn’t see it that way. Here are some of those complaints; more can be found here:

Gotta love when the commentators high five on the Hail Mary for Miami. Not biased at all @espn

@espn why would you show an in booth replay where the announcers give each other a high five after a Miami touchdown?

@espn bad look showing a video of your announcers of VA Tech Miami game giving high five with each other after Miami TD. Pathetic, unbiased I am sure

And so really, regardless of the motivations behind the high five, ESPN created some problems for themselves by showing that replay. And there wasn’t really any need to. But hey, that’s probably the part of this that’s going to get them less criticism overall versus cutting away with a play remaining.