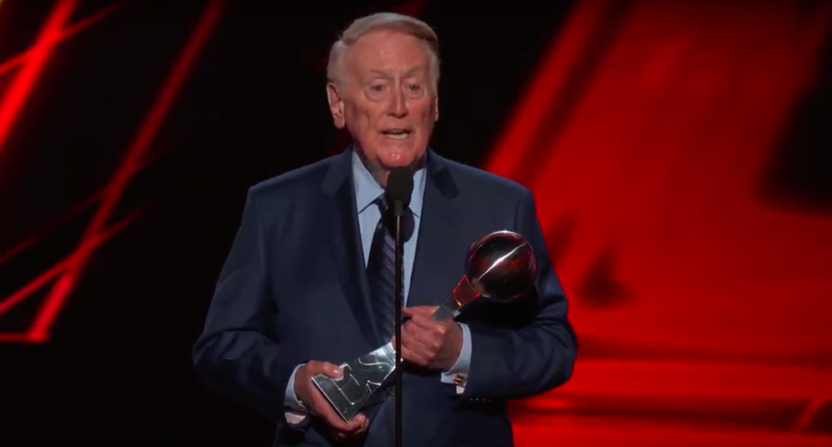 The ESPYS decided to honor long-time Dodgers’ broadcaster Vin Scully with the Icon Award this year, and it’s hard to think of a better choice. Scully retired last October after calling Dodgers’ baseball for 65 seasons (plus doing plenty of national work), and he’s since received all kinds of honors, including the Presidential Medal of Freedom. On Wednesday, when given the ESPY (from presenter Bryan Cranston, no less), Scully gave a remarkable speech:

After starting with his typical “A very pleasant and good evening to you all,” Scully said “I really would like to take Bryan home with me. He is such a wonderful human being. Flew from New York just to get here for this award and now is flying back to New York. I don’t have a relative in the world who would make that kind of a trip.”

Following laughter from the audience, Scully told a story about how he first fell for baseball.

“October 2, 1936. A redhead, eight and a half years old, walking by a window, saw the score of Game Two of the 1936 World Series. It involved the Giants and the Yankees. That little kid fell in love that day, with baseball. The last game that he did before retiring was October 2, 2016, exactly 80 years from whence the love affair began. And in 65 years, he was honored and thrilled and humbled to be able to fulfill a boyhood dream of broadcasting Major League Baseball.”

“You know, God gave us memories so we could have roses in December. And in the December of my years, I have collected so many roses and cherished each and every one of them. And you give me a rose tonight to join my collection of all those years. I am humbled, I am honored, and I know another thing. My work was never, ever a burden. I consider it always a blessing. Thank you so very much.”

That’s a great speech from Scully, profound and concise. And it’s yet one more example of why he’s so beloved.