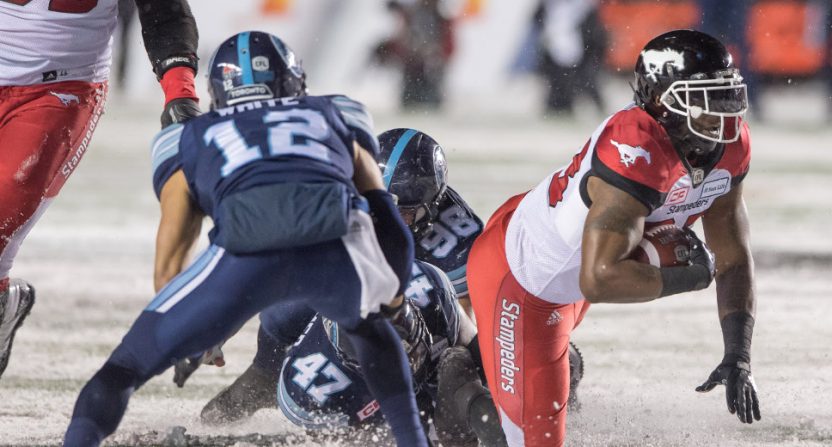 The CFL released its U.S. broadcast schedule this week, and on most levels, it’s pretty similar to what we’ve seen before. 22 games (including the playoffs and the Grey Cup, the snow-filled 2017 edition of which is seen above) will be shown on linear ESPN networks (mostly ESPN2, with three on ESPNEWS), a slight downturn from last year’s 23, but a rise over 2016’s 20. The big difference is where the other 68 games (four preseason games and 64 regular-season games) that will be aired will be shown, though; instead of on ESPN3, which is free with an authenticated cable or satellite subscription, they’ll be on new over-the-top service ESPN+, which is $5 a month with or without a cable subscription.

That was expected, as the CFL was mentioned in the various ESPN+ releases, but it’s now confirmed just how much CFL content will be there. So that’s great news for U.S. cord-cutters who want to watch the CFL without paying for cable and will now have access to most games (albeit not the playoffs or the Grey Cup), but unfortunate for those who already have cable subscriptions and will now have to pay more if they want access to the non-linear games.

Of course, that’s not particularly surprising, and not unique to the CFL. While some of the content on ESPN+ is new, a lot of it is events that have been moved over from ESPN3, and plenty of other fans are going to be in the same boat. (Perhaps especially when it comes to college football; many games that were previously on ESPN3 will now be behind the ESPN+ paywall.) And it makes lots of sense for ESPN to put this on ESPN+; the CFL fanbase in the U.S. isn’t huge, but those who are interested are often pretty fervent, and this will definitely get them some subscribers. It’s a niche sport that wasn’t drawing massive numbers on linear, but does have a committed following, and that perfectly fits the criteria of something to throw on ESPN+.

There will undoubtedly be some backlash from fans who now have to pay extra, but it’s understandable why ESPN is doing this from a business perspective. It’s a way for them to cash in on content they previously included with a cable subscription, and content that’s nice and low-cost for them (as they only take the TSN feed rather than doing their own production). And it also should bolster their ESPN+ subscription numbers, which is a key long-term focus for the company.

This is comparable to what NBC did with the Premier League this year, transitioning from Extra Time streaming (free with authentication) to a new over-the-top Premier League Pass service. And this is perhaps a better deal; Premier League Pass was $49.99 for a year, so considering that that season runs August-May, that’s about the same as paying for 10 months of ESPN+, but ESPN+ also includes a lot of extra content. And, for those who only care about the CFL, the CFL season is only June through November, so that’s six months of ESPN+ for a total cost of $30, which isn’t too bad in the grand scheme of things.

This is also a nice break for U.S. fans who have already cut the cord and are still interested in CFL games, and it’s significant that there is now an over-the-top option for them. (However, it’s not a perfect one, as it doesn’t offer access to the games that are on linear TV, including the playoffs and Grey Cup.) The CFL has never been particularly interested in providing OTT streaming themselves in Canada or the U.S. (they do offer some over-the-top options internationally), preferring instead to take deals from ESPN and TSN that include digital rights. But ESPN has now shifted to a partially OTT model, so those without cable will have the option to buy access to some CFL content. That’s a network-instigated strategy, not a league-instigated one, but it does mark a change that could improve U.S. cord-cutters’ ability to watch the league.

Canadian fans still don’t have that option, as unlike competitor Sportsnet (which launched its Sportsnet Now OTT offering in April 2016), TSN hasn’t ventured into OTT yet. Instead, the network has preferred to use its content (and the CFL is a huge part of that) to drive cable subscriptions and retain existing subscribers. This is also why the Grey Cup remains on cable in Canada; it could draw a larger audience if it was on TSN sister broadcast network CTV, as the Super Bowl is, but the Grey Cup and the CFL are a huge selling point for TSN in terms of subscribers and per-subscriber fees, and they’re willing to take a smaller audience in exchange for that. They have ventured into some skinny bundles, but they don’t seem set to go to a full OTT offering any time soon. So full cord-cutters in the U.S. will actually have more ability to watch CFL games than cord-cutters in Canada this year. (Just not for the most important games, which still aren’t available to cord-cutters on either side of the border.)

The shift from ESPN3 to ESPN+ is the most significant part of this news, but the U.S. linear broadcast schedule is also notable for what it includes in terms of dates and teams. As usual, most of the linear broadcasts will happen in the summer before college football and the NFL start up; there’s only one regular-season game shown on a linear ESPN network after August, and that comes on Oct. 28. The playoff games will be on linear TV as well and will be live, which is nice, as that hasn’t always been the case.

The per-team linear TV schedule is also significant for what it doesn’t show. Some thought there might be more emphasis on the Hamilton Tiger-Cats thanks to them signing Johnny Manziel (who’s drawn a lot of U.S. media interest so far), but the linear schedule has four Hamilton games, equal to Winnipeg and behind Toronto (five), Edmonton (five) and Montreal (six, which is surprising considering that the Alouettes were 3-15 last year). So there doesn’t appear to be a particular favoring of Hamilton.

Of course, Manziel may not even start (Ticats’ head coach June Jones said this week he expects incumbent Jeremiah Masoli to start all year, and while that could change, it’s certainly not preordained that Manziel will get a starting shot), so boosting the number of Hamilton games might not have worked out. And there’s arguably even more value for ESPN in having compelling games on ESPN+ to increase subscriptions there; the linear audience for good and bad CFL matchups hasn’t been dramatically different in the past, but it’s perhaps possible that people will sign up for ESPN+ to watch good games or particular players. (And it’s notable that many of the CFL’s biggest games, including the Labor Day weekend, the Banjo Bowl, and the Canadian Thanksgiving doubleheader will be on ESPN+).

All in all, there’s nothing really shocking in this schedule announcement, but it’s certainly notable to see the full shift from ESPN3 to ESPN+. That’s an understandable call by ESPN as a way to boost the ESPN+ stable of programming, and a way to get revenue out of things it has rights to. And it’s a nice benefit for full cord-cutters in the U.S., who now can have access to many CFL games without a cable subscription. (However, as with the NBC Premier League move, it’s an imperfect offering for cord-cutters, as there’s no way for them to buy access to the games that are on linear TV, including the playoff games.) But it’s a blow for those U.S. fans who do already have a cable subscription, and will now have to pay extra for something they previously had included in that subscription.