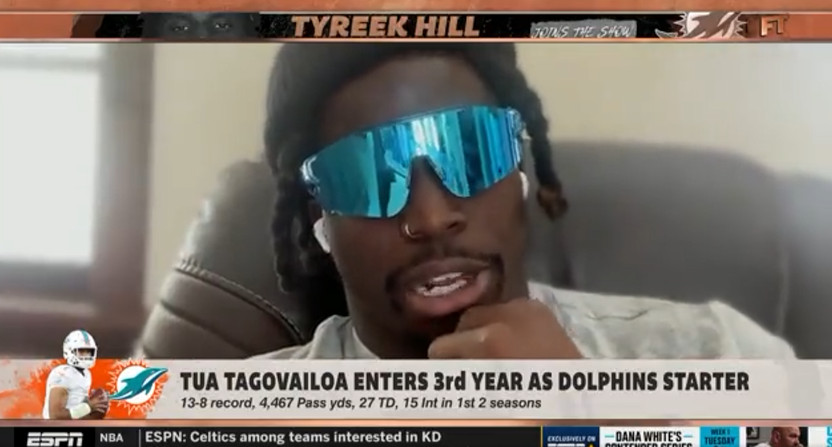 We’ve long seen a variety of f-bombs unleashed on ESPN and other sports networks and shows, but Miami Dolphins’ receiver Tyreek Hill gave us one of the funniest ones imaginable on First Take Monday. There, he followed an uncensored f-bomb with “heck” while praising quarterback Tua Tagovailoa. You can find that at the 1:05 mark below:

Tyreek Hill went on 'First Take' and referred to Tua Tagovailoa as "the most accurate quarterback in the NFL."

He also dropped an F-bomb. pic.twitter.com/u5C0knM0Xh

“He’s a f-ing heck of a competitor” is certainly an unusual comment, especially with the “f-ing” fully uncensored. “Hell” gets censored a lot less frequently than the f-bomb (a H-bomb is something rather different), so it’s quite humorous that that’s the line Hill drew on self-censorship. (It’s perhaps more likely he thought about whether he should swear halfway through and course-corrected, but it would certainly be funnier if Hill is willing to drop f-bombs, but will die on a hill of saying heck rather than hell.) And while this was an interesting discussion overall, and a significant jump up from his previous claim that Tagovailoa was more accurate than his prior quarterback (Patrick Mahomes), the “f-ing heck” here was still maybe the most significant part of this interview.

To be clear, this isn’t necessarily a big deal for ESPN. As a cable network rather than a broadcast one, they’re unlikely to face a whole lot of FCC backlash over an aired profanity. They do occasionally acknowledge and apologize for aired f-bombs (unlike Peacock’s Pro Football Talk Live), which is particularly funny when the aired f-bomb comes from a promo for their own content. But they didn’t appear to really address this one, with the next comment here (after the above clip cuts off) from an ESPN employee being a question from Chris “Mad Dog” Russo that didn’t discuss the f-bomb. And that’s probably fine. But it is funny to see Hill drop a f-bomb on First Take, especially considering how he followed it with “heck.”