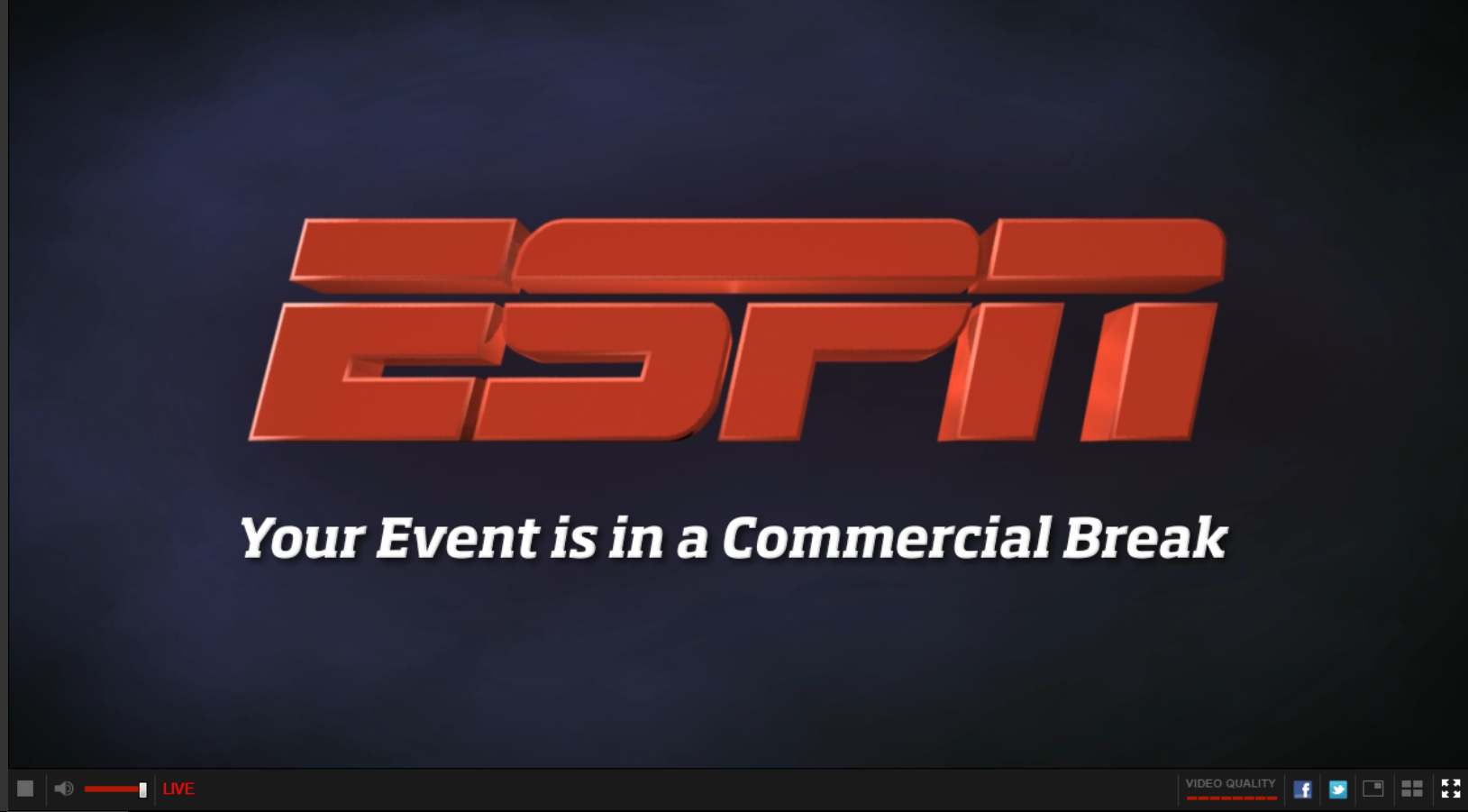 One of the fascinating questions with digital streaming is why even highly-watched programs, such as ESPN’s stream of the college football national championship Monday (which had a company-record average audience of 710,000 according to ESPN’s internal data), have some of their ad slots unfilled, leaving just the ESPN logo and “Your event is in a commercial break.” That’s familiar to anyone who regularly streams events on ESPN3, but it’s interesting that even such a prominent event with such a big audience didn’t fill all its slots. Digiday’s Ross Benes looked into this, analyzing why both ESPN and other TV networks often leave slots unfilled on even popular digital streams, and he found there are plenty of complications involved. However, some of them may be soon set to change thanks to Nielsen’s forthcoming Total Content Ratings.

First, though, it’s worth exploring the current situation. A big part of the rationale for unfilled slots is that many digital ads just aren’t currently worth that much on a cost-per-thousand-impressions (CPM) basis. Digital viewers just aren’t seen as all that valuable, especially compared to traditional television viewers, and they’re not as easy to track. Moreover, those who do want to pick up those slots might be displaying content ESPN and other prominent broadcasters don’t want themselves associated with:

“There is a lot of potential downsides to opening up that [digital TV] inventory to [programmatic] bidding,” said Campbell Foster, director of product marketing at Adobe Primetime. “There is a lot of resistance from big broadcasters because it is valuable inventory and their brand could be damaged if they inserted some real shitty ad. So they are just not going to allow open bidding on high-quality premium TV inventory.”

Dave Morgan, CEO of Simulmedia, added that the CPMs for digital inventory are typically much less than the CPMs for linear TV. So rather than hammering the consumer with a potentially brand-unsafe ad sold through a programmatic exchange, the network might decline showing an ad altogether because the incremental revenue they’d gain from digital ads wouldn’t even amount to a rounding error when compared with their broadcast contracts.

There are other challenges involved, too, and many of them come from the complexities of advertising contracts. For example, ESPN might have to refrain from picking up a digital ad from a competitor to a company that advertises on TV with them. There’s also the possibility of just running the same ads on the broadcast and the stream, but not all ads are approved for both, and running ads that way may reduce the amount of revenue available (as companies aren’t necessarily willing to pay all that much to have their ads air digitally as well as on broadcasts).

Local ad slots also pose a problem there, as streams aren’t typically set up to run those. Of course, networks could use the empty slots to promote their other shows or run content from those shows (like SportsCenter clips), and they do in some cases. Still, Benes notes that they tend to cap how much self-promotional material they air, opting just to go with the network logo instead to avoid being seen as doing promotional overkill. (Another element here may be that this is a tough decision to walk back, especially when it comes to clips; if viewers get used to seeing content clips in ad breaks, it’s harder to later decide to take that out and add ads in its place.)

Most of these issues come down to streaming viewers currently being treated as much less important and valuable than traditional TV viewers, and that’s at least partly a function of the current Nielsen ratings methodology. That may change, though; remember that Nielsen has already rolled out its “total content ratings” (live and delayed viewing across both TV and digital platforms) to publishers and agencies, and that those ratings will be available to all Nielsen clients on March 1. Those may be part of sparking a change. Benes’ piece indicates that digital sales haven’t often been a priority for networks, but they may become one.

TV networks’ online inventory has historically been an afterthought and it is only recently that networks have started dedicating sales resources to other screens, Foster said. Other sources emphasized that this issue will persist until networks’ digital audiences grow enough to make digital investment worthwhile and priorities among the parties involved – measurement firms, TV networks, distributors, ad buyers – begin to align.

“This gets fixed when the Nielsen digital ratings are widely enough deployed that the traditional impression and the TV Everywhere impression get counted equally in the ratings,” [Joel Espelien, an analyst at The Diffusion Group] said.

We’ll see how that transition goes, and if the change in ratings persuades advertisers that digital viewers are more valuable than how they’re currently seen. If that happens, there may be more digital-only ads bought by reputable companies, or companies may sign more contracts to have their ads displayed both on TV and on the digital streams. Until then, though, expect to see plenty of network logos in place of ads.