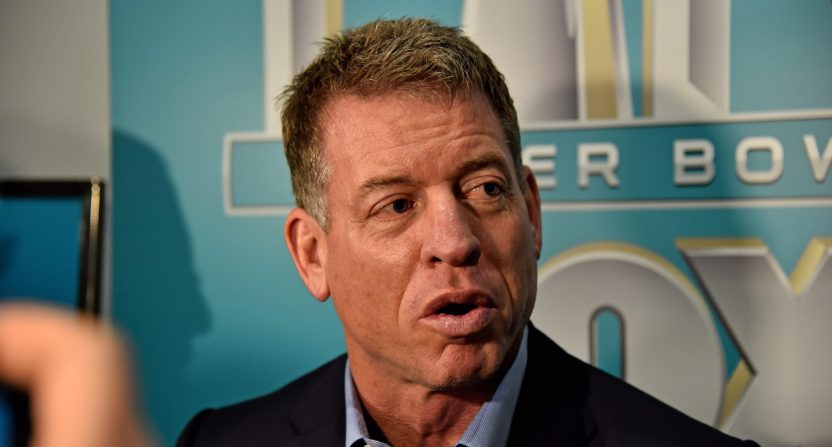 The drama surrounding whether or not Troy Aikman was going to leave his longtime home at Fox for Amazon has taken a twist. According to the New York Post’s Andrew Marchand, Aikman is “deep in negotiations” with ESPN to become their lead analyst on Monday Night Football.

Marchand doesn’t have any details on timing or financial numbers, but it would be hard to imagine Aikman doesn’t get a huge payday if he takes the deal.

The chatter for months surrounding Aikman was that he and NBC’s Al Michaels were being courted by Amazon to be their Thursday Night Football booth as they now have exclusive rights through 2033. Michaels is said to be in pretty deep negotiations to go there, perhaps with a standing offer waiting for him, though it remains to be seen if this changes anything in that department. Or if it even matters for him.

There’s also an interesting possibility that Aikman’s potential move to ESPN could be a precursor to Michaels, Aikman, or both pulling double duty for Disney and Amazon. It’s a rumor that’s been floating out there and was laid out by our Ben Koo earlier this month when discussing Michaels.

Another rumor floating around would be that Michaels could somehow return to ABC/ESPN, as the amount of games ESPN has in their new NFL deal is going up from 17 to 23 games, thus necessitating a second NFL-focused announcing booth. Could Michaels call the [Amazon] TNF package, and then some amount of the ESPN/ABC package as well? This option would open the door for Michaels to call an 11th Super Bowl when it returns to ABC in a few years.

And here’s what Andrew Marchand wrote earlier this month when discussing the potential Amazon duo.

There is a thought that Aikman could split his time between Fox and Amazon. This half-foot in, half-foot out approach would possibly allow Aikman to approach Romo money and still do the biggest games on Fox.

Regardless of where he might go, if Aikman does head for MNF, it’s going to set off a domino reaction across the industry. Joe Buck will need a new booth partner for the first time in 20 years. If Aikman is strictly working for ESPN, then Amazon will need to figure out a backup plan for their TNF analyst. Even at ESPN, the hiring of Aikman would likely mean the current analysts in the MNF booth will be moving around. Not to mention how this affects surging NFL analyst prospects like Sean Payton, Drew Brees, Sean McVay, or Tom Brady, who might be making different moves now.

As for why the 55-year-old would want to make such a drastic career shift after 20+ years with Fox working alongside Buck, the most obvious possibility is likely the correct one. Marchand previously reported that Aikman wants a Romo-esque payday and thinks he can get one on the open market. While he was making around $10 million per year with Fox, Aikman may feel like he deserves as much if not more than Romo, who makes around $18 million per year.

Aikman has also not been shy about letting people know how he feels about the games he’s calling (or wishes he was calling).  There’s always the possibility that Aikman wants to put a bit more distance between himself and certain people as well.