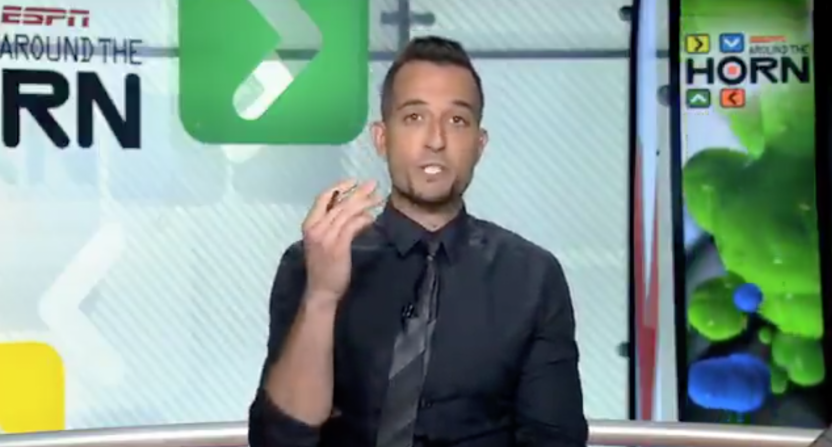 Long-time Around The Horn host Tony Reali is entering his 20th year on-air with ESPN, and he’s now set for a few more. ESPN announced Tuesday that they’ve signed Reali to a multi-year extension. Here’s more from that release:

A host with a producer’s mentality, Reali has helped mentor ATH’s recent influx of new panelists. He has also used his platform to speak openly about mental health awareness and other important issues, and he has been a champion for Special Olympics.

“My goal for every show, every day is to make people feel,” said Reali. “I want people to remember what we say and what we did – mute faces! – but I’m most proud that we make people feel.”

…“Tony is the face of Around the Horn and he’s a big reason why the show has been a staple of ESPN’s weekday programming lineup all these years,” said ESPN Executive Vice President, Event and Studio Production and Executive Editor, Norby Williamson. “With multiple panelists and the scoring component, hosting this show is very challenging, yet Tony makes it look effortless.”

Reali began his career with ESPN in 2000 at the age of 21, starting as a writer and researcher for quiz show Two Minute Drill. When Pardon The Interruption launched in 2001, Reali worked on it as “Stat Boy,” making end-of-episode on-air appearances to give hosts Tony Kornheiser and Michael Wilbon notes on anything they missed. Here’s an early clip of him in that role:

Around The Horn launched in November 2002 with Max Kellerman as host, a role he’d remain in until January 2004 (when he left for Fox Sports). Reali was initially a frequent guest host, and he was named the full-time host on February 2, 2004. Reali has hosted more than 3,800 ATH shows to date. Here’s a compilation of some of his early ATH moments from a video ESPN put out in 2012:

Reali has been a steady face on a show that’s seen a lot of contributors come and go over the years, and he’s done a lot to contribute to ATH’s remarkable longevity. There aren’t a lot of ESPN programs that have lasted that long, and it’s notable that two of them (PTI and ATH) featured significant involvement from Reali. Making it 20-plus years at ESPN is impressive enough in its own right, especially in an era of cutbacks, but doing so as an on-air talent hosting the same show for the majority of that time is particularly remarkable.

Reali has done important things with that platform, too. He’s spoken out on mental health, in support of the Special Olympics, about his family’s journey with losing a child and welcoming another, and much more. And he’s also supported panelists who have wanted to address important topics of their own. Here’s one example of Reali speaking out on the importance of the Special Olympics following a proposed 2019 U.S. federal government cut of support (which ultimately didn’t go through following massive backlash):

.@TonyReali with thoughts on @SpecialOlympics and the ways we are all asked to include all people, everyday.

"This is a test for all of us. Do we include all? In what ways can we encourage better? We can't be brave in the fight and win unless we include and encourage all." pic.twitter.com/bg7aWGPiTH

Reali’s run at ESPN overall and at ATH in particular has been remarkable. And with this extension, fans of him and the show will have Reali around for longer still.