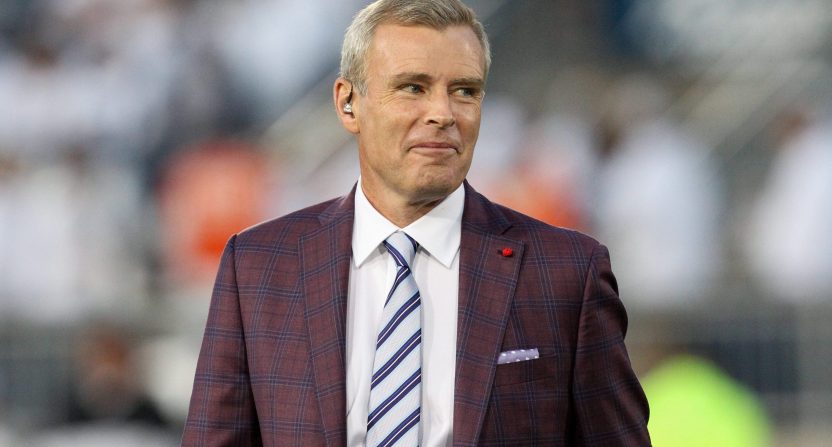 Tom Rinaldi appeared on the Huddle & Flow podcast with Jim Trotter and Steve Wyche this week, and one of the things he discussed was what makes a good story.

Tom Rinaldi, one of the busines' great storytellers, tells Huddle&Flow his thoughts on what precisely is a good story. @wyche89 @tewarren pic.twitter.com/pLgiwrcWI8

Rinaldi started off by describing a report as “a line” and a story as “a wave,” and here’s how the outgoing ESPN reporter elaborated on that idea.

“A report, which absolutely has value, no question, visually to me a report is a line. A story is a wave. A line can take you from one point to another. It can impart knowledge to you. But does it take you up or down? Is there a low point and a turning point? Are you being taken somewhere that has some dips and curves in it, as opposed to the straight imparting of knowledge, which is more like a line? And as you take a step back and you consider what this might be that you want to impart to people, that you want to share with the readership or viewership or audience, however it’s defined now, I think that thinking along those lines has helped me in terms of the visual – a line versus a wave.”

Later in the conversation, Rinaldi talked about compelling themes in stories. His comments should help explain why so many of his stories are…well, let’s call them “emotional.”

“Do we really take a step back and think ‘what are the themes that really compel us most?’ What are they? This was invaluable for me. A few years ago, I did that. And I really took a step back to say if I could try to give language to the two or three themes that compel me the most, and I’m not saying every story I do is going have one of them, but the ones that compel me most, that I want to tell the most, revolve around these three themes.

The line between living and dying, because it’s inherently dramatic in terms of mortality and survival.

Greatness – its pursuit, its cost, its attainment.

And forgiveness. The only dynamic that really exists uniquely to humanity in all living things. You can’t find forgiveness in any other living entity on Earth. Only humanity seems capable of it.”

I really appreciated the wave/line comparison from Rinaldi, because while it’s something I’ve never really thought about, it’s quite true. As for his comments about themes, to each their own, but Rinaldi makes a good case for his preferences.