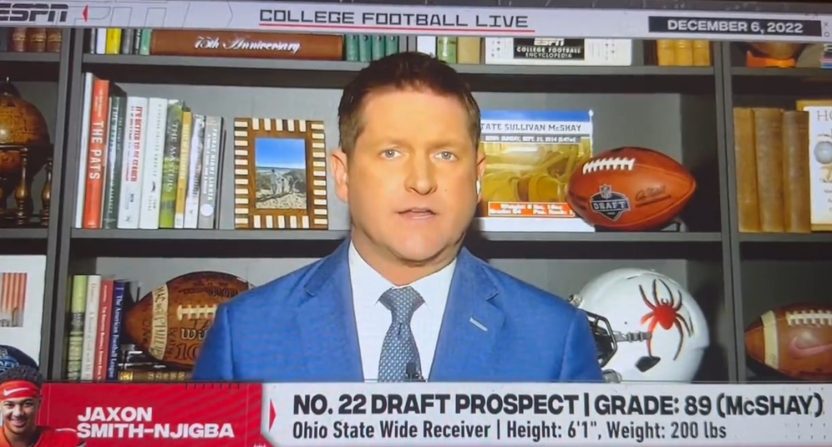 Todd McShay is entitled to his opinions, and he’s paid handsomely for them. The ESPN analyst’s job is to provide insights into college football players and to predict where they might be taken in the NFL draft. But sometimes analysis veers in the wrong direction.

Questioning the severity of a college athlete’s health issues is not something media members should be doing in 2022. At best, it’s unseemly. At worst, it’s irresponsible.

Earlier this week, McShay made some alarming comments about Ohio State wide receiver Jaxon Smith-Njigba. It was a frustrating regular season for Smith-Njigba after being limited to three games due to a hamstring injury.

On Monday, Smith-Nijba announced on ESPN that he was going to prepare for the NFL draft rather than play in the College Football Playoff, saying “The decision to turn pro was made after I was unable to come back on multiple occasions during the season and the doctors determined I would be unable to participate in the playoffs.” This decision did not sit well with McShay and, according to him, NFL scouts.

“There are a lot of reports from NFL scouts that I’ve talked to [who] said he’s healthy enough to play and he’s protecting himself for the draft,” McShay said on ESPN. “I got news for every prospect out there: NFL teams know. They know what you had for lunch last Thursday. They’re gonna know whether you’re healthy or not. And if you’re healthy enough to play, you need to be out there with your teammates and play.”

ESPN personalities criticizing college athletes for not playing in bowl games is not new. Sadly, it’s part of the network’s playbook, especially since it pays a ton of money for the broadcasting rights to these games. And neither is relaying comments from anonymous sources. But McShay took his opinion to another level with the mere suggestion that Smith-Njigba might be being untruthful about his injury.

McShay’s comments warrant further explanation. How do those scouts know this? Why are they leaking this to McShay? And why is McShay parroting those concerns without context? McShay simply could have said the following: “NFL scouts are disappointed in Smith-Njigba’s decision because they wanted to see him play more. Since he has only appeared in three games, that could affect his draft position.”

What McShay did instead was attack Smith-Njigba’s character by hinting that the 20-year-old is selfish and a quitter. Those are two of the worst words to be called in football where players put their bodies on the line for each other.

It’s one thing for McShay to be an armchair quarterback. It’s another for him to be an armchair doctor. We often never truly know what’s going on in another person’s life. Smith-Njigba knows his body and well-being best. But for some reason, McShay thinks he knows better.

Smith-Njigba’s family came to his defense. His father and his brother, Pittsburgh Pirates outfielder Canaan Smith-Njigba, took issue with McShay’s comments. But they shouldn’t have had to in the first place.

Smith-Njigba’s choice should be respected. It’s important to remember that college athletes are not employees. Name, image, likeness (NIL) money has made a financial difference for some. But many are still woefully underpaid in a sport that generates billions of dollars in revenue.

The Big Ten, Ohio State, coach Ryan Day, and ESPN will profit the most from the College Football Playoff. With or without Smith-Njigba. The wide receiver doesn’t owe anyone a further explanation.