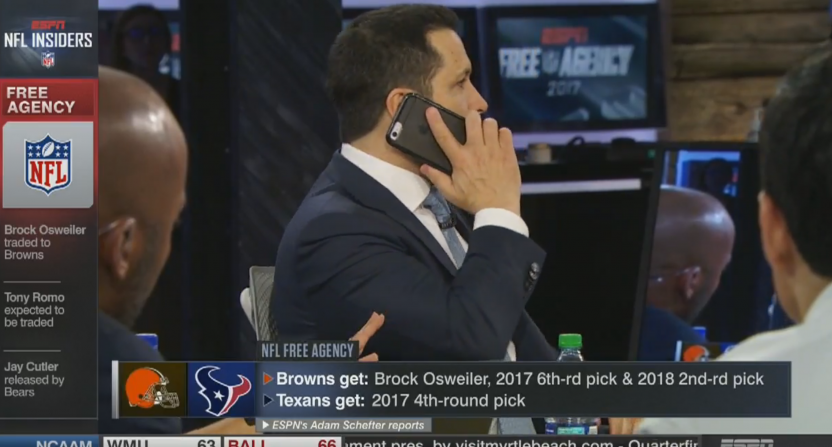 Thursday was the beginning of NFL free agency, which means it’s the beginning of a brutally busy time for ESPN’s Adam Schefter. With free agency on full blast, Schefter has to be glued to his phone at all time, lest he miss out on blockbuster news like a new contract for Jacquizz Rodgers.

So when duty calls and that phone rings, Schefter has take the call, no matter where he is. Even if he’s on live television.

On Thursday, Schefter was on a very crowded NFL Insiders set talking about the Browns’ trade for Brock Osweiler when that phone buzzed. Naturally, he stood up from the table to take the call.

ESPN, all-in on branding Schefter as the archetypal dogged reporter, then trained a camera on him as he spoke on the phone.

We’ve seen some version of this before, with Schefter blatantly checking his texts or even tweeting while on television, but taking a phone call might be a new one. ESPN seems fully onboard with the multi-tasking, as it does seem to fit with the NFL Insiders ethos.

Still, seeing Schefter answer his phone on live TV makes you wonder just how far he’ll go to answer the phone. Does he pick up while he’s in the shower? Will he hang up on one team executive to get a call from another? Is he that guy will drop his phone between the car seat and the center console, then nearly crash while trying to dig it out?

It’s probably not a good time of year to be Adam Schefter’s friend. Or his wife.