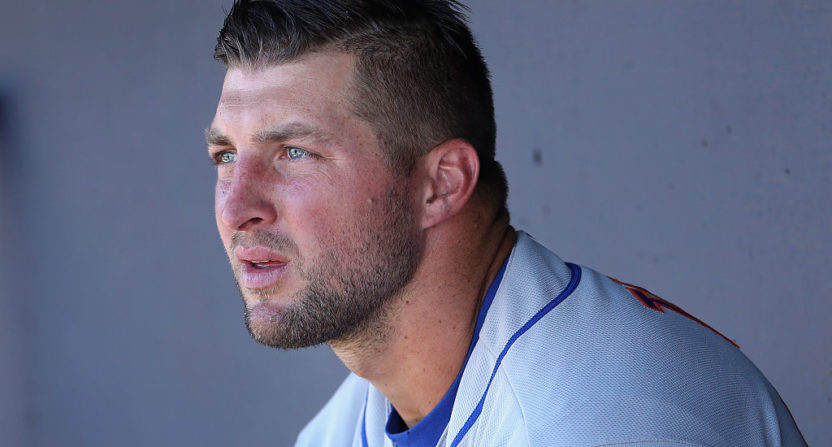 There may be more of a conflict between Tim Tebow’s baseball career and his work as a SEC Network analyst approaching. When Tebow signed a multi-year extension with ESPN and the SEC Network back in May to provide college football analysis across ESPN platforms during the week and appear on live-on-location pregame show SEC Nation Saturdays, that contract made it clear that he could still pursue baseball, but it may be tougher to split time between the two given the way that Tebow is advancing.

Last year, Tebow played minor-league baseball during the week and received permission from the Mets to travel and do ESPN work (including the live SEC Nation appearances) on the weekends, but it was easier to make that call at that time. He only signed with the Mets last September 8 and received his first at-bat in their instructional league Sept. 28, then played in the Arizona Fall League from October through November. At that point, there was still a massive gap between Tebow and any level of major-league significance, and that would have continued this year if he stayed with the low-A Columbia Fireflies (where he was more useful as a box-office draw than a player). However, his undeserved-at-the-time promotion last month to the high-A St. Lucie Mets has led to him putting up impressive results; he went from hitting .220/.311/.336 in low-A to .306/.390/.514 in high-A.

While high-A is still a long way from the majors, it has created some talk about Tebow as a possible September call-up. Mets’ GM Sandy Alderson has said that’s not likely, but anything is possible with Tebow, and it’s notable that Alderson and others in the Mets organization have admitted they signed him at least partly as a marketing gimmick (to the degree of attributing his signing to the director of marketing, because the guy who scouted him didn’t want to be associated with it). In the middle of a dismal and disastrous season full of injuries, dildos, phallic bobbleheads, attacks by homeless men, mascot controversies, feuds with stars, communications breakdowns, and more, the 43-50 Mets could definitely use something to get fans out there, and Tebow might just be that.

That makes it much more interesting to read Tebow’s recent interview with Jeff Eisenband of The Post Game. In there, Tebow talked about how committed he is to baseball, but also confirmed that he’ll still be doing ESPN work (including on-location SEC Nation appearances) this fall. Here’s the key part of that:

TEBOW: Well, I’m going to be training for baseball and continuing to work very hard and on the weekends, I’m very thankful to be with ESPN and SEC Nation, and we’ll be talking football, something I love and I’ve done for a long time. And I just really enjoy it. So, I feel like that is a pretty good way to spend my fall.

TPG: Do you think you would be remote? Or will you be on location?

TEBOW: Well, I’ll be on location for SEC Nation for the games wherever the host team is that we’re at that weekend, whether it’s Florida, Tennessee, Alabama, we get a lot of awesome different games and so I’ll be on location. That’s where you get the crazy fans and that’s part of the fun of it.

TPG: Now, there has been slight talk about a potential September call-up for you. With that obligation, with college football, if the Mets were to bring you up, how would you deal with that?

TEBOW: Baseball is my number one priority right now, but I’m not worried about any of that. For me, it’s worrying about making the adjustments from today to tomorrow, not anything that I can’t control and I know that sounds cliché, but as an athlete, it really has to be your focus. You can’t be on what other people are saying or thinking. It has to be on your mindset and what you have to do to get better from day-to-day.

If Tebow remains in high-A, it makes sense that the Mets would still let him go do SEC Nation on Saturdays, especially as the regular minor-league regular season ends around Labor Day. There could be some conflicts with early SEC Nation games, and perhaps more if St. Lucie is in the playoffs, but it wouldn’t be throughout the college football season. However, there could be more conflicts if he’s assigned to the Arizona Fall League again (not likely, but it could happen). And if the Mets do elect to call him up to the majors in September, it gets really interesting; everyone already knows Tebow probably doesn’t deserve a spot in the majors right now on merit alone, but it gets even more obvious you’re using him as a marketing stunt if you let him take Saturdays off to go cover college football. And that might breed some clubhouse resentment.

In any case, it’s going to be interesting to watch and see how this develops. It’s not new information that Tebow was going to do SEC Nation live on-location this fall, but that’s already a bigger deal than it was while he was struggling in low-A, as the idea of him as a (minor-league, at least) baseball player is looking a little less ridiculous now. It was less of an issue when Tebow was mostly there to draw fans; why would you worry about what he’s doing on Saturdays? But if the Mets are going to promote him further, it will draw yet more attention when he leaves that level to go talk about football on TV.

There might be more conflicts between Tebow’s baseball and ESPN work than either side anticipated, and that’s what makes these quotes interesting. At the same time he’s saying that baseball “has to be your focus,” “has to be on your mindset,” and is his “number-one priority,” he’s also preparing to talk about football on TV. Will baseball put enough demands on him that he struggles at ESPN? Will ESPN put enough demands on him that it hurts his baseball career? We’ll find out, and we’ll find out if he’s able to juggle both of these priorities going forward.