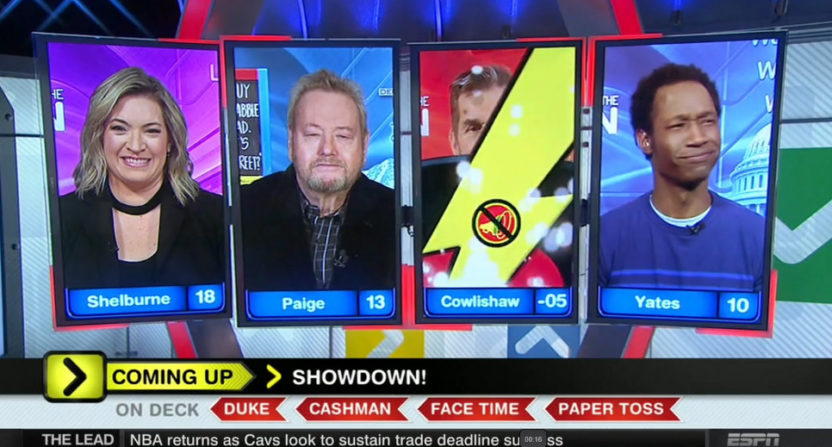 ESPN’s Around The Horn involves different sports journalists and commentators competing for “points” from moderator Tony Reali, but some of those journalists apparently don’t take the competition completely seriously all the time. At the very least, frequent panelist Tim Cowlishaw of The Dallas Morning News doesn’t appear to respect the incredible sanctity of Around The Horn. Cowlishaw went on The Dan Patrick Show Thursday and appeared to admit to tanking:

“Do you think that’s never happened?” Cowlishaw responds, and they both laugh, with Patrick going “Wow. Hold on here!” and Cowlishaw going “What have I done?”

“So you’ve had writers who wanted to get out of the show early perhaps, and they tanked on Around the Horn?” Patrick says. “Is that what you’re saying, Tim Cowlishaw?”

“I’m just saying, I might have called myself out a few times for past mistakes, and that results in a deduction, when I needed to go to lunch or somewhere,” Cowlishaw says. “But that’s as far as I can remember right now.” Patrick then says “Fritzie! Get Tony Reali on the show. This is big news.” Cowlishaw goes “Oh god, I did not mean to do this.” Patrick then says “Wow, wow. I hope this is brought up by Reali later today. Don’t you guys have a conference call or something?” And Cowlishaw responds “They seem to know every time I’m on here, they seem to find a way to bring that up.”

.@AroundtheHorn Statement from Producer: "We are aware of the @TimCowlishaw comments on @dpshow and we are investigating. No further comment until investigation completed….. OK, investigation over. Good luck with future endeavors, Timmy" Tune in at 5–for @TonyReali comment https://t.co/fIBZDNqxju

And then Reali brought it up on the show, with a great segue out of talking about Dallas Mavericks’ owner Mark Cuban being fined for his comments about tanking. Here’s the clip:

That has Reali saying “Speaking of Dallas tanking…” then playing the clip. He then says “Oh, wow, wow, Dan Patrick, doing God’s work here. An Around The Horn investigation and prosecution to the fullest extent of the law!” as he takes Cowlishaw down from 10 points to -2 and mutes him. And Reali then brought it up again at a later break (where Cowlishaw was shown with negative-five points, after losing more points for claiming to have invented the idea of a conference-less NBA postseason) before eliminating Cowlishaw and Clinton Yates to set up the final showdown between Woody Paige and Ramona Shelburne:

“Speaking of tanking, if Cowlishaw is actually tanking, then taking points away is what he wants. So maybe I should have just given him points! But muting is so much fun! I don’t know. That’s it for Cowlishaw, that’s it for Yates. Shelburne, Paige, Showdown. Two minutes.”

This is quite the funny sequence of events, and props to Reali and Solomon for having a good sense of humor about it. Sports, and sports talk shows, don’t always need to be completely serious, and this was a good case in point of why. This was particularly notable around Cuban getting hit with a $600,000 fine for talking about the Mavericks’ tanking. Cowlishaw’s punishment wasn’t quite as severe, but it was thoroughly appropriate.