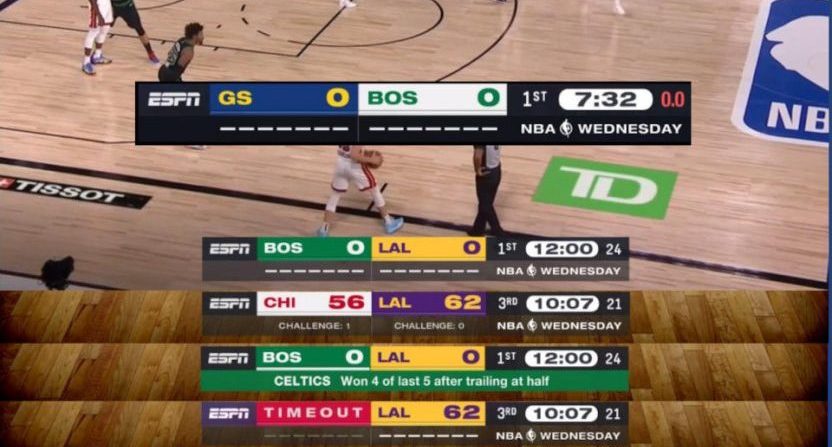 This NBA season is going to see the largest graphical overhaul in seven years for ESPN’s NBA broadcasts, rather on that network or on ABC. AA took part in an ESPN call on this Tuesday, and that came with examples of some of the new graphics:

Here's a look at some of the new graphics package ESPN will use for NBA coverage this year. More info in their release: https://t.co/1wqV6q1EDO pic.twitter.com/CJBXcXolKj

On that call, ESPN vice president (production) Tim Corrigan said it was the right time to make a change, and to do so with new graphics from their in-house ESPN Creative Studio. These graphics will apply across games, studio properties, and even WNBA and G-League broadcasts.

“We were due for a refresh,” Corrigan said. “It’s still branding as our mark, with what we call ‘Big Jerry’ as our primary logo, and trying to make the teams and their colors and their marks kind of the star of the package, as we do,” Corrigan said. “Like anything we do in all of our sports categories, we have a lot of mouths to feed, when you look at the event side, the studio side, the digital side, social. It’s just kind of lining everybody up, getting everybody looking and feeling like the same brand. There’s a lot of legs.”

“And we’re really excited about it. This is just a taste of it, and it’s incredible, incredible work by our ESPN Creative Studios. There was great collaboration between visuals and vision of what we want to look like and what we want to be; we want to be contemporary, but we want to be big and bold, and let the teams and let their marks shine throughout the broadcasts. This branding will stretch across all of our NBA properties.”

Corrigan said one key change is that teams’ colors on the bottom scorebug will now match the jerseys they’re actually wearing (as seen in the example at top).

“When you see this and you see some different colors for teams, what we call the swatch…those will always match the uniforms that the teams wear. If Golden State’s in the blue uniforms, that’s the background they’ll have,” he said. “These swatches will immediately identify the jersey these teams are wearing. And all the lower thirds, they’ll match with the swatch. …As the NBA, like all leagues, is going on to different unique uniforms and presentations, we felt like an identifier when you turn on the screen, you’ll immediately know who’s playing and what teams are in it. It’s just simple things that we think matter.”

He said that’s growing increasingly important with the rise of alternate jerseys, and it’s in response to some feedback they got and some issues they noticed themselves.

“We did find out sometimes, looking back when teams were wearing alternate things, you turn on the TV and you’re like ‘Who is who?'”

The ESPN and NBA packages will also now come with new music. Here’s a clip of that:

New ESPN NBA theme song or remix of an instrumental from a Rocky movie? pic.twitter.com/aJAmQ4xtif

Corrigan said it was the right time to go for new music while they were also doing this graphical overhaul.

“We felt like, as we were going to make this big transition visually, let’s reimagine all of it,” he said. “Let’s reimagine the music. Feeling more contemporary was important to us. And as we went back and looked at images through the years, we also had to play this music against what we’ve historically done, whether it was old footage of Bill Russell or anybody else.”

Corrigan said he thinks the new music will work for both past and future footage.

“This music will touch the legends of the past as well as the future of the game. I think as we kind of reimagined how we wanted to do everything, this was a part of it too. And we’re hoping that this audience who is passionate about the NBA now, they’re going to start recognizing it quickly, and we are hopeful that they’re going to be listening to this in 30 years.”

In response to a question from Jon Lewis of Sports Media Watch, Corrigan also said it’s important for them to have one musical theme across most of their properties versus the different ones they’ve had in the past.

“That’s the intention for exactly that reason, versus having too many different versions. NBA Today will have a different feel of this, but we kind of came at it with a, let’s say, champions version of this from the get-go, not ‘Here’s a regular-season version and we’ll give you the better one later.’ It was ‘Let’s act like champions from day one.'”

We’lll see how this new approach works out for ESPN’s NBA coverage. It will debut Thursday with NBA Today at 3 p.m. ET, followed by NBA Countdown  at 7 p.m. ET, and then a doubleheader featuring the Brooklyn Nets at the Miami Heat at 7:30 p.m. and the Los Angeles Lakers versus the Minnesota Timberwolves at 10 p.m ET.