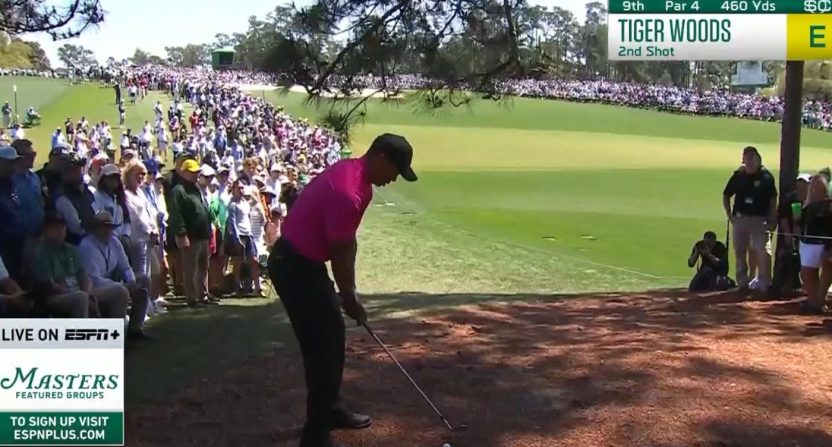 Early live coverage of the Masters is available on ESPN+ Thursday and Friday, but ESPN has done a nice job of showing Tiger Woods in real-time on linear TV through their SportsCenter at the Masters programming.

Woods miraculously teed off for the first round of the Masters Thursday morning in Augusta, defying the odds of returning to competitive golf 13 months after a severe car crash nearly forced his leg to be amputated. And while his return is a feel-good story for most sports fans, the joyful narrative hasn’t caused Woods to lose any of his competitive spirit, as seen by his foul language on the ninth hole.

Tiger with the f-bomb on 9 pic.twitter.com/uph6bUBUy8

After driving the ball into the trees and pine needles, Woods’s second shot appeared to be great as it touched the green. But the ball took a turn, rolled down a slope and off the green, causing Woods to react with a “f*ck off” near a hot mic.

ESPN is surely ecstatic to see Woods back on the course, playing in his first official PGA event since the accident. But along with the prestige that Woods brings to any golf event, also comes the occasional temper flare-up.

While the f-bomb may not be fit for Disney’s ESPN, any amateur golfers watching at home can certainly relate to Woods’ frustration. A round of golf without dropping a few profanities isn’t really a round of golf at all. Although specific to Woods shot out of the trees, most amateur golfers would have celebrated landing anywhere near the green.

Despite his second shot rolling off the green, Woods was able to save par on the ninth hole. He’s continued to impress throughout the day, sitting at even through 12.