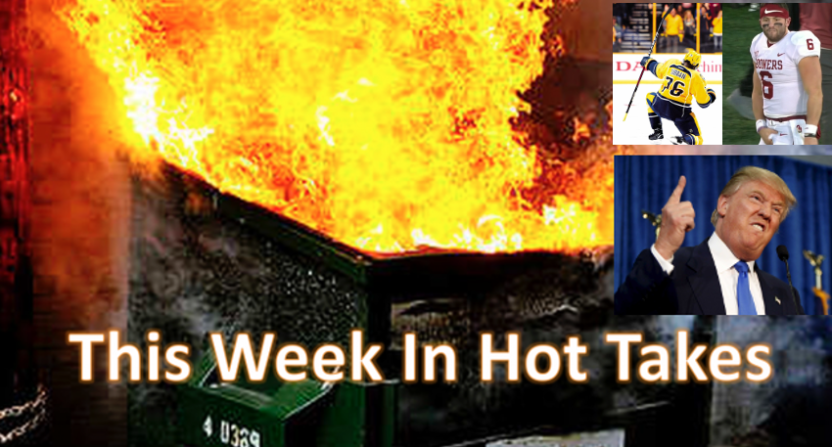 Welcome to another week of This Week In Hot Takes, where we break down all the hottest sports media takes of the week. This time around, we’re covering takes from April 13-19.

5. Brian Kenny thinks Baseball Hall of Fame voters don’t emphasize the postseason enough: MLB Network’s Brian Kenny is often portrayed as the analytical voice in the room, but that doesn’t always hold up, especially when it comes to Baseball Hall of Fame discussion. As Bill Baer noted in 2013, Kenny’s hypothetical Hall of Fame ballot that year had two major issues from an analytics perspective (Fred McGriff over Jeff Bagwell and the absence of Mike Piazza), interesting considering that both were hugely favored by wins above replacement, an argument he’s used elsewhere. And the take he dropped this week was one really out of line with the rest of the statistics community:

Because post-season play was once rare, it's barely a blip in @baseballhall consideration.
This needs to change.
Those games not only count, they count More.

What in the world is that? The BBHOF is voted on by sportswriters, primarily older sportswriters, and if there’s anything they love, it’s postseason heroics. Jay Jaffe, who’s done a ton of work covering the Hall of Fame and who’s likely to get in, emphasized that:

No. Many players in the Hall whose stats aren’t actually all that great are there in large part due to World Series success. Chief Bender, Lefty Gomez, Kirby Puckett, various Friends of Frankie Frisch… https://t.co/hUOF70mWbl

And an added focus on postseason play is particularly problematic for a couple of reasons, as it both favors players on good teams (and punishes great players on bad teams) and is based on a tiny sample size. Considering the postseason can be just fine with some caveats, but there’s every indication that BBHOF voters already do, and probably do to too great of an extent. So Kenny arguing for even more focus on the playoffs is a pretty hot take.

4. Nick Cafardo goes to great lengths to try and make a case that Mookie Betts is comparable to Mike Trout: Speaking of rewarding players for being on good teams and punishing players on bad teams, that’s a central part of the very silly homer argument Nick Cafardo made in The Boston Globe this week when trying to compare Red Sox right fielder Mookie Betts to Angels’ center fielder Mike Trout, which even involved him bringing in anonymous scouts who made false claims about Betts having a better recent OPS. Here’s Cafardo’s argument that Betts should have won the 2016 MVP because Trout’s team didn’t make the playoffs:

Betts finished runner-up to Trout for the 2016 American League MVP. I think Betts got robbed. As a voter, I place great value on a player who helps lead his team to a first-place finish. Betts did that in 2016. Trout’s Angels were awful, and it’s tough to gauge the value of a player under those circumstances. Where the stats lean in favor of Trout, that’s where the majority of the votes went.

Which brings us to a topic that will never die: Should the MVP award be based on the best player, or his value to the team? It seems they’ve become one and the same. But that shouldn’t be.

Even putting aside the never-ending “best player or value to his team” debate (which is also silly in the way it’s phrased, as the best player is still providing the most value to his team; what proponents of that cause should be arguing is “most value to team that makes the playoffs, or goes far in the playoffs”), Trout and Betts were not particularly comparable in 2016. Betts hit .318/.363/.534, Trout hit .315/.441/.550. That’s an OPS almost 100 points higher, and while Betts may have been better defensively, that was at a less premium position. Trout produced 9.6 WAR by Fangraphs in 2016, while Betts produced 8.3. (And it’s worth noting that this is the most comparable season between the two; Betts’ other best full season is 5.4 WAR in 2017, while Trout’s worst season is 6.9 WAR that year.) These two players are only in the same conversation if you’re wearing Red Sox-filtered glasses, as Cafardo appears to be doing.

3. Mark Kiszla says Avalanche “expose Predators as great pretenders,” despite trailing in the series: Speaking of homeriffic takes, here’s a doozy from Denver Post columnist Mark Kiszla. Kiszla is covering the Colorado Avalanche’s playoff series against the Nashville Predators, where the Predators won the first two games. Colorado won one Monday to pull the series back to 2-1 (it’s now 3-1, as the Avalanche lost on Wednesday, and they can be eliminated tonight), and Kiszla went through the roof about it, insisting that this (based on some fan chants about history?!) proved the Predators are “great pretenders”:

Nathan MacKinnon and the gritty little Avalanche have done the rest of the NHL a favor, revealing the Nashville Predators as great pretenders in the chase for the Stanley Cup.

The truth came from on high, shouted from the last row of Section 334 in the Pepsi Center.

It was a chant started by die-hard Avalanche fans Luke Hutchinson and Nick Tremaroli, directed at Nashville’s embarrassing lack of hockey pedigree. I think these guys are on to something, don’t you?

First, decades-old performances have zero to do with modern success, as Avalanche fans should know; their Stanley Cups in 1996 and 2001 didn’t prevent them from spending seven of the last 10 seasons out of the playoffs, and they barely snuck in to the final Western Conference berth this year. And turning over your column to a chant from fans is really a good way to go. But beyond that, Kiszla then makes a bunch of further ridiculous claims:

Nashville joined the NHL in 1998, as part of commissioner Gary Bettman’s grand plan to expand a sport covered in wintry tradition to cities that freak out at the sight of a single snowflake.

How many championships has Nashville won? Zero.

The truth is as hard to deny as the final score: Avalanche 5, Pretenders 3.

Or did you miss how the Avs got under the skin of the big, bad dudes wearing the dandelion yellow sweaters? Colorado peppered the net with pucks until Nashville goaltender Pekka Rinne ran and ducked for cover in the safety of the visitors dressing room.

It’s a series now. The Avs have made the Pretenders grumpy.

Ah, yes, weather-based trolling, that old hockey staple. Because that matters so much. (Honestly, it often feels like something people in cold climates throw at other fanbases to try and ignore their own dissatisfaction with the weather. “We may be freezing, but we’re a TRADITIONAL HOCKEY MARKET!” Except, in Colorado’s case, they really aren’t; they had a team from 1976-82, but it moved to New Jersey, and they only got the Avalanche when they left Quebec City ahead of the 1995-96 season, a whopping three whole years before the Predators came into the league.

The more important fact might be that Nashville went to the Stanley Cup Final last year, and Colorado hasn’t made the postseason since a first-round exit in 2014. And the Pretenders, er, Predators, will have three chances to give them another one, beginning tonight. But Kiszla and his “die-hard fan” buddies can keep up with their chants after their team’s gone.

2. Colin Cowherd’s rant blasting Baker Mayfield includes “shirtless in SI”: “Shirtless in Sports Illustrated” sounds like the worst imaginable follow-up to Sleepless in Seattle, but it also was part of an astounding Colin Cowherd rant this week about Oklahoma quarterback and NFL draft prospect Baker Mayfield:

— @ColinCowherd: "This is a guy who grabbed his crotch on the sidelines, planted a flag on a logo, was arrested for public intoxication & tackled by police, didn't study a Chargers playbook, shirtless in SI, and a former coach at TCU called out his dad." https://t.co/iigjhuWBsi

The “didn’t study a Chargers’ playbook” part isn’t even true, as Mayfield said he did study it, just not as thoroughly as playbooks from some other teams perhaps more likely to draft him. The “planted a flag on a logo” was this fall’s stupidest controversy, and “grabbed his crotch on the sidelines” wasn’t far behind; neither of those seem particularly damaging to an NFL career. And why would we care about what a former assistant at a school he didn’t go to said about his father? The only even minorly-serious thing in that rant is the arrest, and “public intoxication” arrests not only aren’t rare for athletes, they’re probably about the least negative thing an athlete can be arrested for. And the “shirtless in SI” is just a hilarious criticism. Even ESPN hot take artist Will Cain called Cowherd out for this one:

Also:
– a guy who walked onto two programs, won starting job twice, and won the Heisman.
– a guy who completed over 70% of his passes for 2 years.
– a guy with a QB rating over 140 against pressure
– a guy with the 2nd highest AIQ score for a qb ever. (Football smarty pants.) https://t.co/lefJufjacG

1. Stephen A. Smith compares Colin Kaepernick to Donald Trump: I mean, what else can you even say about that?

When the white guy realizes you're "loud and wrong" in regards to issues of race.

Going forward I will call this dude "Sunken A. Smith.

“Here you have a white billionaire who wanted to be part of the league and couldn’t get in! Colin Kaepernick couldn’t get back in!” Kellerman’s face throughout that is something. And it’s great that Smith follows that up with “I understand that the two things don’t really have much to do with each other.” No, no they don’t.

Bonus: Because it is 4/20, here’s a compilation of Smith telling people to “STAY OFF THE WEEEEEEEDDD!”