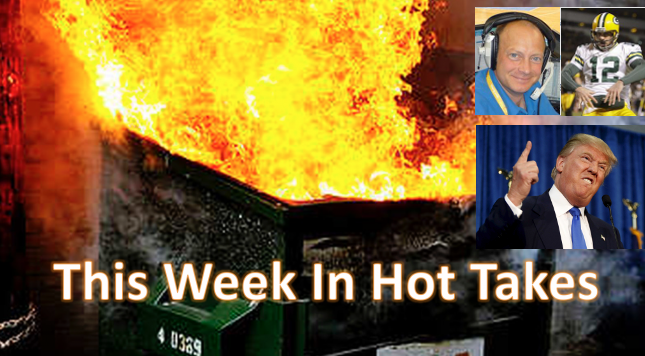 It’s time for another edition of This Week In Hot Takes! Here are the hottest takes from sports media figures for the week of Jan. 20-26.

This seems like a highly dubious take to drop from the outside, where you have no idea of the player’s diet, workouts, targeted playing weight or more. But JT is known for those; he said in November that legalized marijuana will lead to NFL players getting high during games, and said this week that legalized marijuana will hurt the NFL’s quality of play. So, he has plenty of opinions on health, physical fitness and how everyone else should behave.

4. Skip Bayless calls Aaron Rodgers “the most overhyped QB in the history of pro football”:

"[Aaron Rodgers] is also the most over-hyped QB in the history of pro football… He's made for today's social media." — @RealSkipBayless pic.twitter.com/mb7lSaDT4l

Bayless’ argument here is essentially that Rodgers is talented but inconsistent because his career playoff record is only 9-7 and his team lost this week, but it’s worth noting that wins and losses are a terrible way to evaluate quarterbacks (especially playoff wins and losses, which are even more of a small sample size). Rodgers has two NFL MVP wins, two first-team All-Pro selections, six Pro Bowl nods and a Super Bowl MVP award, all of which probably say more about him than this last loss.

It should also be noted that Rodgers finished Sunday’s game with 287 passing yards, three touchdowns against one interception, and a 60 per cent completion mark. Yes, that’s far from perfect, and yes, those touchdowns came after the game was already out of hand (Green Bay was down 26-0 at the half), but Rodgers was far from the only problem here. The much bigger issue was the defense, which Matt Ryan torched for 392 yards and four touchdowns with a 71 per cent completion rate, so this wasn’t really about Rodgers being overhyped. Also, guess where some of that hype came from? Remember last week, when Skip had some different things to say about Rodgers and the Packers?

.@RealSkipBayless: If the Packers can come into Jerry World and beat my Dallas Cowboys, I'm sticking with them this week. pic.twitter.com/YxdSBurQbM

.@RealSkipBayless: Aaron Rodgers owns the Georgia Dome. It's more his house than it is Matt Ryan's house. pic.twitter.com/bSHGpyvOn1

Well, it sure wasn’t Rodgers’ house on Sunday, Skip, but that doesn’t instantly make him “the most over-hyped QB in the history of pro football.” If it did, though, you’d be as much to blame as anyone.

3. Don Cherry goes after colleague Paul Romanuk for not specifically promoting Coach’s Corner: Cherry’s known for hot takes on a variety of subjects, but it’s unusual to see him not only specifically go after a member of the sports media, but one who happened to be working on the same broadcast. That’s what happened on Saturday, though, where Cherry went in on play-by-play man Paul Romanuk for a perceived slight.

Romanuk, who was calling the Montreal-Buffalo game, teased what was coming up at the first intermission with about six minutes left in the period, and included a plug for Cherry’s Coach’s Corner. When the period ended, though, Romanuk seemed pressed for time and just told viewers to “stay tuned for a busy first intermission.” That led to Cherry ranting about him in his opening segment:

Ken Campbell of The Hockey News went in hard on Cherry’s comments:

That’s when Cherry, whose pettiness is only rivalled by Donald Trump, ripped into Romanuk.

“And this is your ‘busy’ first intermission,” Cherry said. “Where’s he from? What’s that guy? Who’s the name?”

And at that point, Cherry’s enabler, Ron MacLean, replied: “Paul Romanuk. This is funny. And for those of you watching the Montreal show, Paul said, ‘And a busy first period coming up.’ ”

Not yet content with embarrassing his colleague in front of the entire Hockey Night in Canada viewership, Cherry had to continue. “Thirty-four years and this guy comes over from Europe. Can’t make it there, so he comes on our show. All right, let’s go.”

…After his only cogent segment, one in which he said younger players should use smaller pucks, he dug the knife into Romanuk again. “Do you think Paul would like that? They don’t do that in Europe, eh? They don’t use small pucks.” And as MacLean was signing off, Cherry interrupted once again with, “Busy! Busy!”

…Just as he was as a player, Cherry is a bully. He uses his status to belittle others, even if they work alongside him. This is not the first time he has taken fellow HNIC employees to task in a public manner. And even though Cherry is never to be crossed, he seems to have carte blanche to publicly rip anyone he wishes. Absolute power corrupts absolutely.


As Campbell notes, that’s not at all an accurate description of Romanuk’s career. Romanuk is Canadian, started his career as a AHL and junior radio commentator from 1981 to 1987, worked for Hockey Night in Canada (alongside Cherry, but it wouldn’t be surprising if Cherry never noticed him) as a stats assistant from 1984 to 1987, and worked for TSN as a freelance reporter from 1984 to 1987, as a full-time reporter from 1987 to 1989, and as (primarily) a NHL on TSN play-by-play commentator from 1989 to 2001. He also called a lot of international hockey tournaments for TSN during that time.

After that, Romanuk did radio work for the Toronto Argonauts and the Toronto Raptors before moving to Europe in 2005 thanks to his wife getting a job as a senior Coca-Cola Europe executive, and he continued to do freelance play-by-play work there (including for Canadian broadcasts of international tournaments) until Rogers brought him back to Canada in 2014 as a voice of their new NHL deal. That’s hardly “can’t make it there.” But hey, as Campbell writes, Cherry went on to call Slovakian Leafs’ defenseman Martin Marincin “the Russian, whatever his name is,” so this wasn’t even the most inaccurate thing he said all night.

2. Stephen A. Smith: “Y’all don’t have to catch connecting flights and travel all year long just to watch blowouts.” We covered this earlier this week, but it’s a great fit for this column too; Stephen A. used a SportsCenter appearance Tuesday to complain to John Anderson about how only the Warriors, Spurs and Cavaliers are really good, and then say he can’t enjoy those teams’ dominance because his life is so hard thanks to connecting flights and blowouts:

“Don’t get me started about how enjoyable this season is. The Finals are going to be epic, assuming it’s San Antonio – Golden State (Ed note: this is impossible, as they both play in the Western Conference) or Golden State – Cleveland. Everybody else, as far as I’m concerned, they’re just playing for third, fourth or fifth place, which isn’t that much exciting to me (sic). I’m sorry, I don’t blame the fans, I certainly don’t blame you, but y’all don’t have to catch connecting flights and travel all year long just to watch blowouts. That would happen to be me.”

That’s quite the rant, Stephen. We all feel so bad for you and your millions in annual salary.

1. Bart Hubbuch compares Donald Trump’s inauguration to 9/11 and Pearl Harbor: We covered this one earlier too, but it’s thoroughly deserving of a slot in this column. Here’s the tweet Hubbuch decided to post on Trump’s inauguration day, pin to the top of his profile, and then only delete hours later:

There are plenty of reasons to criticize Donald Trump, for sure, but comparing his inauguration to an act of war in Pearl Harbor and to the deadliest terrorist attack on American soil in September 11 is incredibly fiery, and offensive to many who lost people in either attack. Maybe Hubbuch should have kept his account deleted.