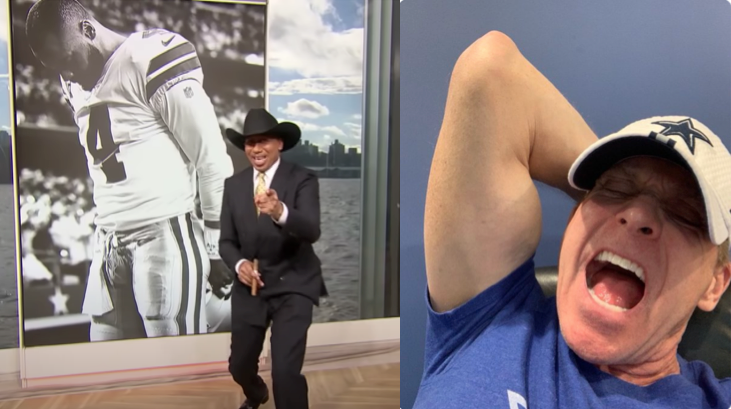 It was a massive Monday for @undisputed and @TheHerd – with both shows scoring their most-watched shows ever on @FS1 ? pic.twitter.com/kgrmxxrUqp

Perhaps after a near decade into their existence, FS1 daily shows are starting to regularly get more viewers than their ESPN counterparts?

Not wanting that narrative to fester, ESPN PR sent their own tweet.

On Jan. 17, @GetUpESPN & @FirstTake both had their most-watched episodes EVER! pic.twitter.com/dPuwEb8LkH

Get Up airs the earliest in the day of these programs and had a record high audience of nearly 2/3 of a million viewers. First Take and Undisputed air at the same time and both had record days with First Take a little under a million viewers and Undisputed clocking in just under a half million viewers. The Herd airs later in the day and also a record day with around 300,000 viewers. Four programs spanning two networks and seven hours of the day (8am-3pm ET). Didn’t matter the network, the time, the show, or the host, people were thirsty for sports content and showed up in record numbers.

Why was everyone tuning in? Simple: the Cowboys lost, and lost in a memorable way (although a federal holiday likely helped juice the numbers a bit more).

This really should have been the full two hours of First Take today pic.twitter.com/EmEDpkfhUy

Who’s fault is it? Should Mike McCarthy be fired? Did the refs screw up? Can they Cowboys win the Super Bowl? How many more of these topics ripe for daytime TV can you come up with on your own? You should have been a producer!

I spent the holiday not rubbernecking what we call the big 4 sports talk shows but I can only imagine. This past March, when football is the only pro sport with not much going on, I watched all four of these shows to see what % of their airtime they would devote to Dak Prescott’s new contract. Any guesses on how that went? The results below.

Which of the big 4 sports talk shows talked about Dak Prescott’s deal the most and Is 93% of a show too much for one topic?

While it may feel that the amount of Cowboys coverage is overkill to many, what we see in Monday’s ratings is that the data supports the heavily tilted coverage. Someone at one of the networks told me after that piece published, “The data shows we would talk Cowboys even more if we could and it would be even better for ratings.”

Here is another datapoint for you. The Cowboys loss to the Niners was the most watched Wild Card game in seven years. To put it in perspective the audience nearly doubled the Alabama vs. Georgia national championship game from earlier in the week and crushed the other Wild Card game in terms of audience.

People tune in because they like the Cowboys. Others tune in because they want to see the Cowboys lose. Either way, it moves the needle and the networks know it. They’ve known it for a long time. It’s why Skip Bayless’s biggest two controversies the last few years have been Cowboy related (commenting on Dak Prescott’s mental health and Mike McCarthy’s weight). It’s why Michael Irvin is now on First Take and why two of the four A team NFL announcing booths have former Dallas Cowboy quarterbacks as their color guy.

We watched all of today's Undisputed to see if Skip Bayless would address the controversy from his comments yesterday on Mike McCarthy's weight.

Instead half of the show was devoted to Dak Prescott and LeBron James.

Business as usual at FS1! pic.twitter.com/U1zzBWVy8w

As much as you may detest the wall to wall coverage of the Cowboys, LeBron, Tom Brady, etc,  Sunday and Monday was across the board confirmation that the networks know exactly what they are doing and will continue to lean into where they think and know ratings paydirt is for them regardless if it’s overkill for many of us.