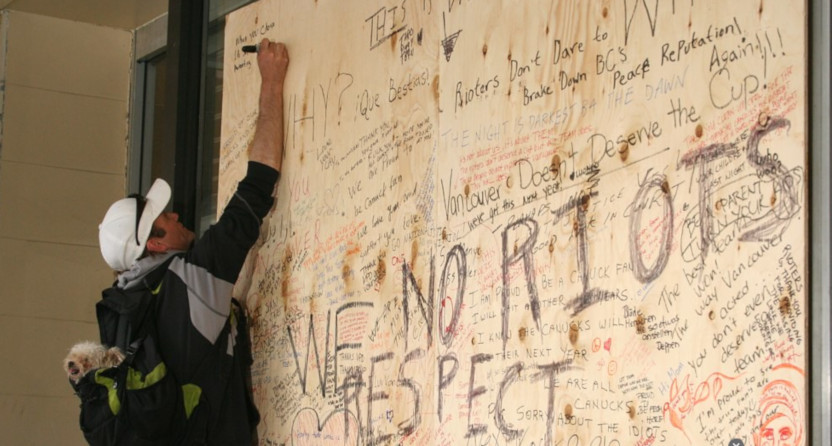 The 2011 riots in Vancouver, B.C. around the hometown Canucks’ 4-0 Game 7 loss to the Boston Bruins have remained a subject of discussion years later, especially around this year’s 10th anniversary. That’s seen a lot of features on the aftermath, including ESPN’s Greg Wyshynski speaking with photographer Richard Lam and Alex Thomas and Scott Jones, the famous “kissing couple” caught in Lam’s iconic photo of the scene. And it looks like those looking-back features may get an even more substantial ESPN treatment in the days ahead.

As per Rob Williams of the Vancouver-based Daily Hive, a Vancouver art installation on the riots (including boards put up in the aftermath, as seen above in an Erin Brown-John Flickr photo) is now moving into the public space for an opportunity to add some new messages 10 years later. And that’s associated with an upcoming ESPN project. But it’s not clear what ESPN’s involvement is. Here’s more from Williams’ piece:

Those plywood boards will be on display at šxʷƛ̓ənəq Xwtl’e7énḵ Square (Vancouver Art Gallery North Plaza), lent from the Museum of Vancouver where they are normally kept. There will also be blank canvasses on hand, with people encouraged to share new messages 10 years later. Fans can also share their memories by emailing vanhockeyriot@gmail.com.

Local filmmakers Kat Jayme and Asia Youngman are behind the installation, and will have cameras set up. They wouldn’t reveal further details about the project other than to say it’s in “collaboration with ESPN.”

…“I think everyone in Vancouver can remember exactly where they were when the riots happened. It’s always just such an interesting conversation that comes up,” Youngman told Daily Hive.

…While Jayme was watching the infamous game at home with some friends, Youngman watched on a big screen in the street outside the CBC building.

“I just remember so vividly, just that energy that was in the air. It was a really scary moment. I chose to leave pretty quickly. I went down to Dunsmuir and my dad and my brother picked me up and we fled before they shut down the downtown area,” she added.

Jayme will already be familiar to U.S. viewers thanks to her direction of 2018 short documentary Finding Big Country (on former Vancouver Grizzlies’ star Bryant “Big Country” Reeves). And Youngman has her own notable directorial credits, including 2018’s In The Valley of Wild Horses. So this is certainly something that could be part of a 30 for 30 if ESPN chooses. And on that front, it’s notable that they’ve done some, but not a ton, of hockey stories in that series, and that they might have more incentive to do more hockey stories now that they have NHL rights (beginning this fall). But it’s also notable that ESPN has many documentary and series projects outside of 30 for 30 these days, especially now that they have ESPN+ as a destination for that content. So this isn’t necessarily a full-fledged 30 for 30.

At any rate, it’s definitely interesting to hear that a couple of prominent Vancouver filmmakers have linked up with ESPN. And for whatever format this winds up being in, some credit’s due to ESPN for pursuing a story that doesn’t have a local American market for them; it’s easy to focus on big U.S. markets and areas where a documentary will get a lot of local attention, but Vancouver is not one of those for them. But there’s a notable story here, for sure. And it will be worth keeping an eye on just what ESPN decides to do with it.

[The Daily Hive; photo via Erin Brown-John on Flickr]