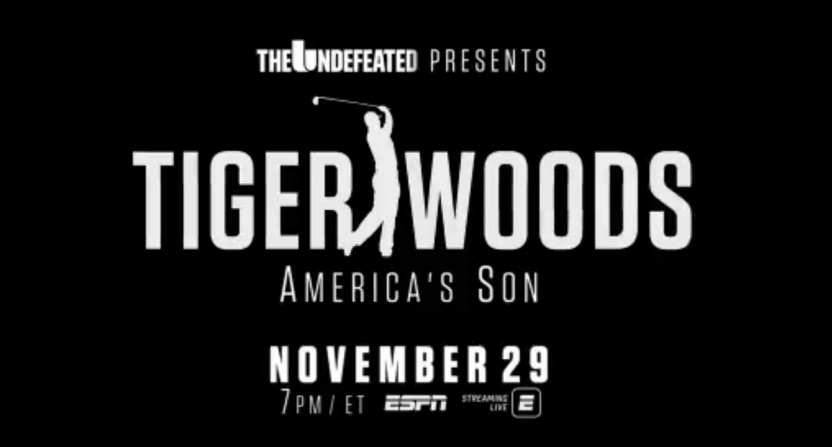 There’s already one upcoming Tiger Woods documentary in the works from HBO, and today ESPN and The Undefeated announced they have their own coming in just a few weeks.

Set to premiere November 29th on ESPN, Tiger Woods: America’s Son promises to be an exploration of how Tiger redefined what Black athletes could achieve in the predominantly white sport of golf, while also exploring the ways he could have gone further to do so in the eyes of many.

That’s a big topic for a one-hour documentary, but the issues are certainly worth exploring. Golf remains inaccessible for many demographics other than “wealthy white people”, and while Tiger is clearly the best player of all time and one of the wealthiest and most famous athletes ever, we’re 23 years removed from his Masters win in 1997 and there are still only three Black regulars on the PGA Tour. One of them is Tiger. That actually represents a drop from prior eras in golf, which points to the many unseen ways economic accessibility prevents golf from being representatively diverse.

Put another way: what are the odds that in a meritocracy, the very best player in the history of the game is Black, while so few other Black players even make it to the top level of the sport? It’s obviously not exclusive to golf; other sports with huge economic barriers to entry yield similar results. (Lewis Hamilton, the Williams sisters, etc.)

The project has an impressive list of participants, as well:

Tiger Woods: America’s Son is told through rarely-seen footage from Woods’ early career and life, including archival interviews of a young Tiger Woods and his parents, as well as more than 25 interviews and testimonials from fellow golfers, former Augusta National Golf Club caddies, journalists who covered his career, and more. Interview subjects include:

That it’s promising to take a critical look at Tiger’s own role in shaping his legacy and relationship to race is also fascinating. It’s certainly an angle that leaves plenty of room for HBO’s look at Tiger’s off-course troubles, among other facets of his life and career.