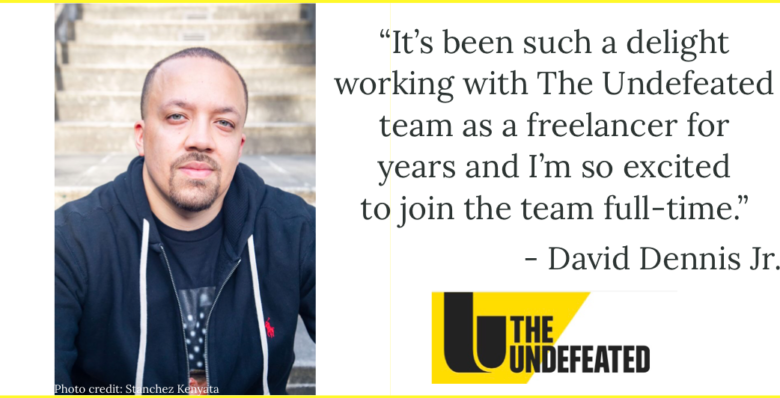 Many of the verticals associated with ESPN have received less corporate focus in recent years, with the shuttering of Grantland and the eventual transfer of FiveThirtyEight to ABC News. However, The Undefeated, which had the roughest start of any of those verticals, has become a key part of the ESPN portfolio. It’s added many notable writers, gained prominence within the company, and put out multimedia documentaries and specials. And while some of that was attributed to Undefeated editor-in-chief Kevin Merida’s rise within ESPN, it’s certainly notable to see the company still emphasizing The Undefeated after Merida left for The Los Angeles Times last month (and was replaced by internal hire Raina Kelley, who had previously been The Undefeated’s managing editor). The latest example of that is their announcement Monday that they’ve brought on David Dennis Jr., who had previously freelanced for the vertical, as a senior writer covering music:

David Dennis Jr., a freelance journalist, educator and commentator based in Atlanta, Ga., has joined The Undefeated full-time as a senior writer covering music for the culture vertical of the ESPN multimedia content initiative on sports, race and culture. A frequent contributor to The Undefeated, Dennis will also write long- and short-form pieces on other topics at the intersection of race, culture and sports.

Dennis will begin his new role with The Undefeated on Monday, June 21.

“With David officially joining the team, we are fast-tracking the continued expansion of our Culture vertical,” said Raina Kelley, Vice President and Editor-in-Chief, The Undefeated. “David is at home within The Undefeated brand and will continue to deliver the brilliant and thought-provoking stories he’s well known for. That he’s starting during Black Music Appreciation Month is an absolute bonus.”

Dennis joins The Undefeated after ten years as a critically-acclaimed and award-winning writer whose work has appeared in The Atlantic, The Washington Post, Atlanta magazine, HuffPost, Medium, and more. His articles for The Undefeated ranged widely, from a sweeping history of the Black community’s involvement in social media to an assessment of rapper Kanye West’s career and a look at actress Halle Berry’s filmography after the debacle of Catwoman.

That release goes on to note that Dennis received the 2021 American Mosaic Journalism Award for his work, including Atlanta piece “Ahmaud Arbery Will Not Be Erased.” So he certainly has an impressive background, which also includes serving as a visiting professor of Journalism and Social Justice at Morehouse College. It’s also notable to see ESPN bringing on someone who had previously freelanced for them as a staffer; that can be a great way to see if someone’s a fit for a publication, but not all corporations embrace that pathway, so it’s cool to see ESPN doing that. And it’s also interesting to see ESPN make a hire specifically with reference to covering music; under president Jimmy Pitaro, they seem to have moved away from a lot of not-sports cultural content elsewhere, so it’s notable to see that continue at The Undefeated.

Beyond that, the announcement of a senior writer hire at The Undefeated is significant as a continued demonstration of ESPN’s commitment to that vertical even after Merida’s departure. And that’s not to be taken lightly. Yes, The Undefeated seems to be doing well for them, but ESPN has moved away from many things that seemingly were working apparently largely because their internal champions were gone (again, see Grantland). It’s possible to envision a world where The Undefeated drew less and less corporate support after Merida’s exit, and was eventually shuttered or sold. And yes, one hire of a senior writer isn’t necessarily proof that that won’t eventually happen, but it does feel like an indication that ESPN’s not going away from support for The Undefeated just yet.