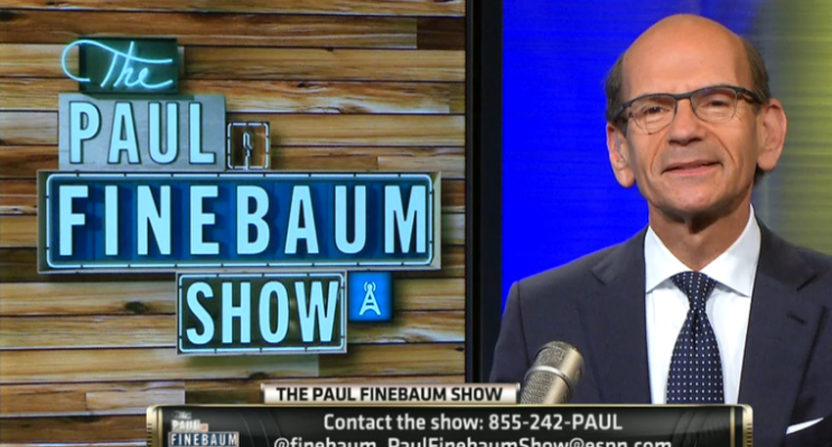 A big issue for ESPN2 lately has been finding original daytime programming, especially following January’s move of First Take to ESPN and February’s conclusion of His and Hers (so Jemele Hill and Michael Smith could move on to ESPN’s SC6) and move of The Jump to ESPN. They’ve now come up with something to help fill the void, and something that already has an established format, an under-contract host, and a passionate audience; The Paul Finebaum Show. ESPN announced Monday that Finebaum’s show will  expand by an hour, and that the additional hour will start in August and air only on ESPN2 (and WatchESPN) before the regularly-scheduled show on SEC Network and ESPN Radio:

College football fans will gain another hour of college football talk this season when SEC Network host and provocateur, Paul Finebaum, expands his popular discussion program The Paul Finebaum Show by one hour exclusively for ESPN2 beginning Wednesday, Aug. 16 and running through the end of December. The new, TV-only hour will be aired 2-3 p.m. ET before the show goes live 3-7 p.m. on ESPN Radio and SEC Network, Monday through Friday.

“With the addition of The Paul Finebaum Show to the ESPN2 afternoon lineup, we are super-serving college football fans hungry for discussion and analysis about their favorite teams,” said Burke Magnus, executive vice president, programming and scheduling, adding, “Paul’s distinctive interview style and ability to tap into the passion of real college football fans will undoubtedly translate into a new must-see hour of original programming on ESPN2 this fall.”

It’s quite important for ESPN2 to find new programming like this, as their daytime lineup has been so rerun-focused lately. ESPN2 used to be very much its own thing, but some shows like Olbermann were canceled, while others like SportsNation and Highly Questionable moved to the ESPN mothership in 2016, with First Take and The Jump following this year and His and Hers ending. After those February moves, ESPN2 was completely reruns of ESPN programming (except for the final hour of The Dan Le Batard Show with Stugotz) from noon to 7 p.m. Eastern. Things got a little better in May, with MLB Network’s Intentional Talk joining ESPN2 and plans formed to bring College Football Live (previously on ESPN) to The Deuce when it returned in July, and Finebaum’s show buttresses that lineup a little further. It’s still mostly reruns, but there are now a couple of reasons to turn to ESPN2 during the day beyond “I want to see what was on ESPN earlier.”

Why might that matter? Well, having ESPN2 do decently is important for ESPN parent Disney in its own right (they’ve lessened emphasis on carriage of ESPNews and Classic, but ESPN2 is still key for them), and it’s also valuable in the PR war with FS1. Fox Sports personality Colin Cowherd bragged about FS1’s first-ever back-to-back month wins over ESPN2 Friday, and while that doesn’t necessarily mean a whole lot (congrats on beating reruns two months in a row, and three months out of six, I guess?), it’s not something ESPN execs love to hear.

Those inside Bristol have consistently positioned ESPN2 as the real #2 sports network, especially in response to some of Fox’s bolder claims. However, that hasn’t actually been the case (at least by primetime or total-day viewers) for the last two months. Finebaum’s show alone isn’t necessarily going to change that; the bigger boost may come from college football season, when plenty of good games air on ESPN2 (however, FS1 has significant fall rights of their own, so even ESPN2 improvement may not alter the leaderboard). Providing some original content for ESPN2 seems like a step in the right direction for its ratings, though.

This seems like a solid mix of proven and new, too. Finebaum is already under contract and is already a well-known personality, and adding another hour to his show isn’t the biggest risk out there. But making that hour before the main show and making it exclusive to ESPN2 feels like a good step. With a TV-only show, there’s room to do more with graphics and video segments than if you’re doing radio show simulcast on TV, so that may allow Finebaum and his producers some more creativity for that opening hour. And putting this first is the right kind of challenge to user behavior; it seems more likely that people will tune in early for more Finebaum, especially if there are some TV-only twists or top-of-the-day interviews, rather than stick around after the radio show for that.

Putting the TV-only show first lets Finebaum plug it throughout his radio show, too (“As I was saying during the ESPN2 portion of our show earlier…”), and it may draw an even bigger audience (those interested in just Finebaum’s takes on the day’s hottest college football topics may tune in, as he’ll likely cover a bunch of that in the opening hour before moving on to more in-depth discussions). And ESPN2 will get a bit of an on-location boost here, too, as Finebaum will be broadcasting from the location of Saturday’s SEC Nation pregame show (which he also appears on) each Friday. There are a few concerns, of course; in particular, are there enough people who love Finebaum’s brand of college football commentary and want yet another hour of it? But still, this feels like a pretty decent bet, and a pretty easy move for ESPN to make. At the very least, it will reduce the amount of reruns on ESPN2.