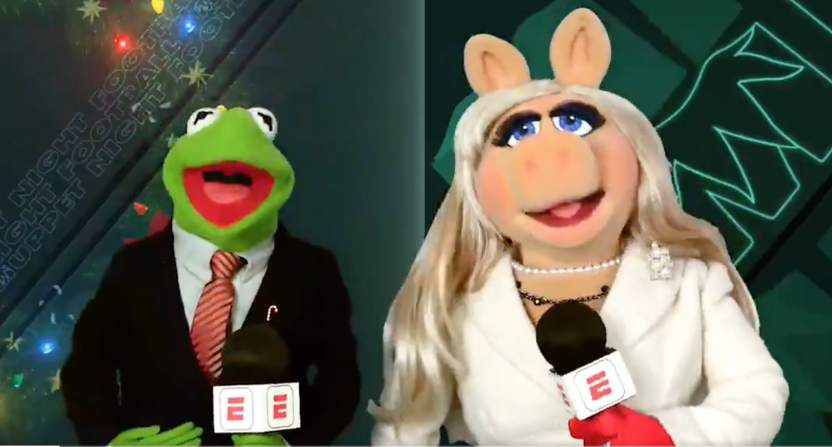 Apparently, ESPN didn’t want CBS to get all of the kids-themed NFL broadcast attention. Monday Night Football can reach out to the kids too with… Muppet Night Football.

A week after CBS announced its NFL Wild Card playoff telecast for Nickelodeon, ESPN will feature The Muppets on the Week 15 MNF telecast. First to report the news was the New York Post‘s Andrew Marchand, whose tweet was unfortunately not accompanied by the famous theme from The Muppet Show.

It’s The Muppet Show with our very special guests, the Pittsburgh Steelers and Cincinnati Bengals! YAAAHH!

Sure, the Steelers and Bengals are playing an important matchup for Pittsburgh’s AFC playoff seeding. But Kermit the Frog and Miss Piggy will kick off the broadcast to spread some holiday cheer (and corporate synergy). Here’s a sample of how Monday Night Football with the Muppets will look:

The Muppets will be involved on tonight's Monday Night Football broadcast. Kermit the Frog & Miss Piggy will host a short pre-show at the start of the telecast, and some of the other Muppets will be sprinkled in throughout the night for some holiday cheer. pic.twitter.com/buJQ1GgEth

ESPN’s official release — written by Kermit the Frog (wink, wink) — assures the audience that the broadcast will still stick almost entirely to football. Steve Levy, Brian Griese, and Louis Riddick will still call the game, with Lisa Salters reporting. As Marchand said in his tweet, 95 percent of the telecast will be a normal one. But The Muppets will mix themselves in throughout the night.

The Muppets will be part of ESPN's MNF broadcast tonight.

– 95 percent of the broadcast will be normal.
– Kermit and Miss Piggy will be part of the open of the broadcast
– There will be other Muppets, including my favorites, Statler & Waldorf

We realize people want their football with very little goofiness. This is serious stuff! But will ESPN really go as far with involving The Muppets as they could have? For instance, shouldn’t Fozzie Bear provide analysis for all instant replay reviews?

“After further review, that’s not a catch even though JuJu Smith-Schuster had both hands on the ball as he hit the ground! Wocka wocka!”

Or maybe cranky hecklers Statler and Waldorf would be better for that if there’s a clearly blown call.

“Every week, this show looks better to me.”

“Every week, your eyesight gets worse!”

Shouldn’t those guys appear in the booth with Levy, Griese, and Riddick?

“Hey Louis, are you taking the Lions job? I’d be lyin’ if I said you should! BAH HA HA!”

Related: Tis the season for Louis Riddick to interview for NFL GM jobs

How about Animal thrashing on the screen every time there’s a touchdown? (Our original suggestion was going to be for each first down, but that might be a bit much.) Or the Swedish Chef (who wasn’t mentioned in the ESPN release) coming in with “Bork bork bork!” whenever there’s a turnover?

OK, it’s entirely possible some of you reading this are barely familiar with The Muppets. The Muppet Show mostly ran in syndication from 1976 to 1981. Maybe that’s why Disney is trotting these colorful characters out for Monday Night Football.

Or this is all being done for the sake of fun and holiday cheer. That’s OK, right? One out of 17 MNF broadcasts can be a bit playful, right? (This should be more fun than the comic book superhero opening for Week 3’s Chiefs-Ravens game.) As ESPN noted in its release, this is the third consecutive year that the MNF opening will have a holiday theme.