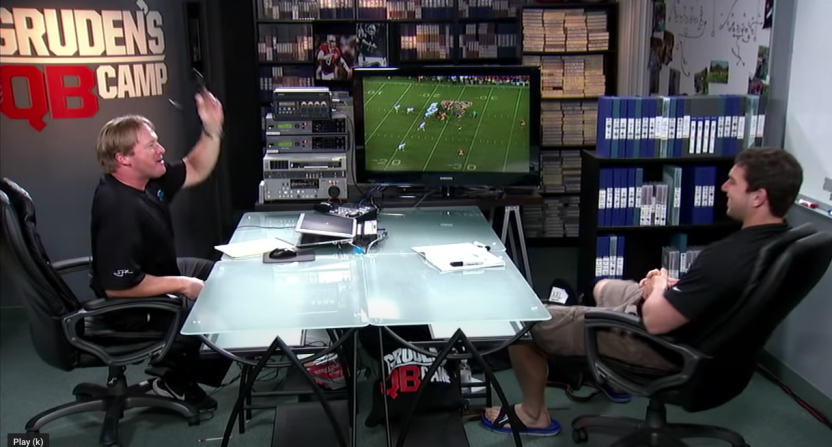 The San Francisco 49ers have moved up to the third pick in the draft with obvious intentions of drafting a franchise quarterback. Who will that be? Will it be a good pick or just another first round bust? Who knows!

We play this game every year: trying to prognosticate which quarterback prospects will turn around the fortunes of a franchise and fanbase. This is arguably half of the intrigue in the draft and most of us play along, recycling opinions about quarterbacks they watched very little of playing in college. I’m guilty of this myself, often finding myself with quite opinionated thoughts on certain QBs and other draft picks.

A huge part of my personal involvement of assessing quarterbacks comes from my enjoyment college football (my favorite sport), and I organically crafted some of those opinions over time rather than latch onto the the popular groupthink of NFL analysts. But beyond watching college football, I loved immersing myself in Gruden’s QB Camp as an entertaining and comprehensive study tool for the draft.

Combining chalk talk, film study, some on-field work, and Gruden’s awkwardly intense prying personality, the vague unknowns about a lot of these prospects would seemingly come to light. Were they a system QB? How do they handle criticism? Are they shy? Did they audible much in college? Let’s dig into minutiae a bit more!

The show wasn’t perfect. Gruden seemed to usually land at the same spot: either the QB in question was going to be good, or he could be good if he (insert something here). It’s not like Gruden was ever going to come out with a verdict of “this guy is going to suck,” but sometimes you could read him a bit and sense he wasn’t feeling certain prospects.

Gruden’s QB Camp just worked as a show. It was unique. Gruden’s shtick of needling 21-year old soon to be millionaires was entertaining, and you usually learned something along the way. Other draft analysis coverage started to feel like regurgitated fluff that feigned confidence and certainty, but was often backed by very little specifics.

We pondered if the show would survive once Gruden left. ESPN tried with something called QB2QB hosted by Russell Wilson, but it was not the same and it hasn’t been back.

So with the draft a month away in a pretty QB heavy draft (or so I’m told), I really feel lost. I’ve seen Zach Wilson play very little. I can’t tell you very much about Trey Lance. Mac Jones as a top ten pick evokes thoughts of Christian Ponder to the Vikings. I have no idea on a lot of the moving parts and maybe that’s always been the case. At the very least, during Gruden’s QB Camp, I fooled myself into thinking I had an idea, which was good for me and good for ESPN. That not only got me watching every episode, but likely benefitted from a boost in draft intrigue that could correlate for higher viewership for the draft.

Gruden’s loss in the announcing booth has been felt in Bristol over the last few years, but that wound seems to be healing.  For me, the true loss comes from now having to feel like I’m flying blind with all the blustery quarterback chatter. Perhaps if Peyton Manning stops going to so many damn places, he could do this instead.