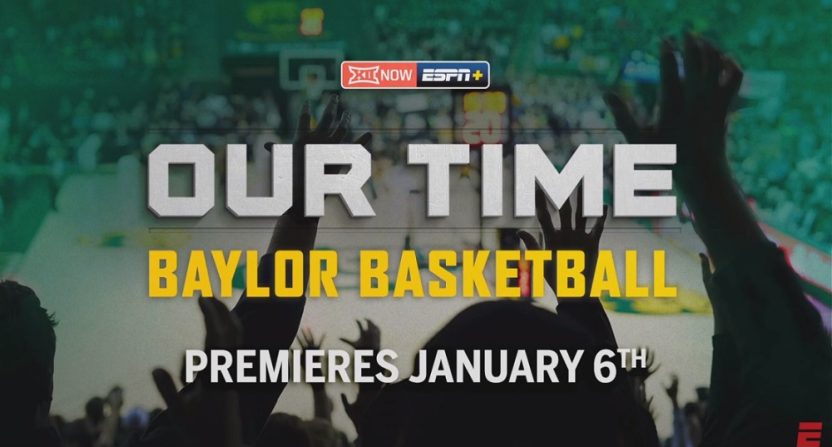 The first two editions of ESPN’s Our Time docuseries focused on college football, following the UCF and Oklahoma State programs. But the third won’t wait until next fall – it’s premiering in January, and will follow both the Baylor men’s and women’s basketball teams.

Per an ESPN release, the 12 episode season premieres on January 6th and airs exclusively on ESPN+ under the Big 12 Now branding. Episodes will premiere each Thursday through March.

Like the previous two iterations of Our Time, which followed the Oklahoma State and UCF football programs, Our Time: Baylor Basketball offers a special look inside the men’s and women’s teams. Expectations in Waco are higher than ever for both basketball teams this season. The storied women’s program enters a new era under first-year head coach Nicki Collen, while the men’s team has ‘repeat’ on their minds as head coach Scott Drew’s retooled roster seeks to hold its reign atop college basketball following their historic run to the school’s first ever national championship last year.

“Our Time is a great opportunity for fans to get a closer look behind the scenes of everything that goes into our Culture of JOY,” said Drew. “We’re really excited that this will give basketball fans around the world a chance to get to know our players and our program on a deeper level.”

Collen added, “We’re excited for fans to get an exclusive inside look at the Baylor Women’s Basketball program. Our Time is such a unique opportunity to provide a glimpse into everyday life here at Baylor and for people to get to know more about our players and program.”

“After two successful seasons of Our Time, this is a unique opportunity to take things to a new level,” said Brian Lockhart, senior vice president, ESPN Original Content and ESPN Films. “It’s a rare privilege to cover both the defending national champion men’s program, one of the true rising powers of the sport, and the historically successful women’s program as it transitions under the new leadership of Nicki Collen. Giving fans a look into both teams and the community surrounding them in Waco will be truly special.”

And here’s a trailer.

ESPN focusing on both the men’s and women’s program at one school is refreshing to see, and both of Baylor’s programs have strong narratives and reasons to be featured. Plus, they’re both good this year: the men are unbeaten and ranked #1 in the country, while the women are 9-2 and ranked #10.

So anyway, keep an eye out for that. It should be interesting, especially if either team’s season is impacted by COVID-19.