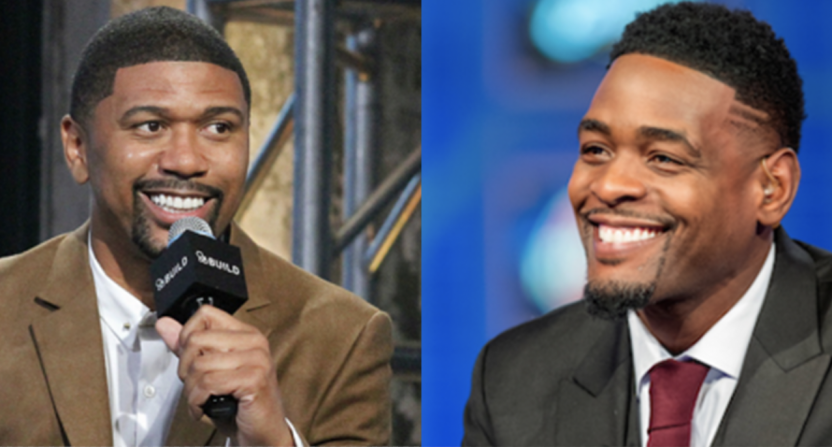 As members of the Fab Five, Jalen Rose and Chris Webber led the Michigan Wolverines to two Final Fours (though most of their wins and both of their Final Four appearances were vacated due to NCAA violations). Both players went on to have notable NBA careers before both entered the media world.

Rose has worked with ESPN as an analyst, host, and radio personality since 2012 while Webber is an analyst on NBA TV’s NBA Gametime Live and occasionally shows up on TNT’s Inside the NBA. Despite their parallel paths, the two have grown increasingly distant in recent years, often outright feuding in public over their differences.

The problems actually go back to the Fab Five days, as outlined in Rose’s book Give the People What They Want. In it, Rose said he asked Webber to distance himself from booster Ed Martin, who took care of Chris financially. Webber refused in spite of Rose insulting him and that relationship was the eventual downfall of their time at UM and it’s legacy.

Years later, when ESPN made the “30 for 30” documentary The Fab Five, which Rose had a hand in making, Webber claimed he wasn’t contacted about participating in the film until the last minute, which was disputed by Rose (and teammate Jimmy King). Webber also took shots at Rose for purportedly making himself into the star of the documentary.

“A lot of people…after they retire or they’re looking for a job or they want to be relevant…they go back in time and kind of…make sure their importance is really known……when one guy has a million highlights of himself…as if he was the leading scorer and all the stories are embellished, it’s hard for me.”

“One dude traveled then called timeout. One dude lied to grand jury and hasn’t apologized. One dude tried to circumvent the documentary to HBO. One dude ignored multiple requests from everyone involved after agreeing to participate. One dude played like (President) Obama and sat in a suite during Michigan’s recent title game. One dude slandered Ed Martin after all he did for him and his family. One dude is not in contact with the other four (which is all good). One dude has been doing a rebuttal doc for four years. One dude clearly is delusional and still in denial.”

Despite the growing chasm between the two, Rose was optimistic at the time that they would one day be friends again.

“People do grow up, they grow apart from their classmates, from teammates, from people along their journey,” Rose told For the Win’s Nina Haskell. “The goal for living is to continue to grow, mature, navigate to a point and a place where you’re doing what makes yourself and your family and your well-being go the way you want it to.”

Fast-forward to 2018 and Webber, who has been estranged from the University of Michigan for years over the controversies, has been invited by Jim Harbaugh to be an honorary captain for the football team during a game this upcoming season. Webber accepted the offer and Jalen Rose commented on the news in a way that might seem entirely positive at first but could be interpreted a certain way if you were, say, Chris Webber. (transcriptions by FTW)

–@JalenRose reacts to Chris Webber accepting the invitation to be honorary captain at a Michigan football game pic.twitter.com/NfVFiIGBep

“I’m elated by this news. I’m not surprised by this news and, respectfully, it’s calculated, because he understands that he is a Hall of Fame-level player. And he has to turn around the thoughts of a lot of media members who didn’t select him. So, to me, I see this as the first step of him reigniting his Hall of Fame candidacy for public consumption.”

It is a complimentary comment, but calling the move “calculated” was sure to get the attention of Webber. And it certainly did. Webber responded during an appearance on Sway in the Morning.

“When he broke that code, to — what I feel — further his career, that hurt me as a man. … To give them what they want and become one of them now, when you can always be yourself and hold your integrity, that really hurt me. We’re brothers so I love him, but he was on some (expletive).”

Naturally, Rose wasn’t going to let that slide and responded himself on Get Up on Thursday morning.

"I don't need to talk about him to further my career."

–@JalenRose responds to Chris Webber's comments about him and the Fab Five pic.twitter.com/jGZ71RbEP8

“Everything that I’ve said about the journey at the University of Michigan and about the Fab Five was a ‘we’ thing, not a ‘me’ thing. … I don’t need to talk about him to further my career. I don’t sell out, I am not a media shill, I do not sell my soul in order to talk about sports on television.”

And so, the Fab Five Feud between the two leaves its Cold War status and returns to the forefront where it will eventually cool back down, both sides will claim to want to work it out and be friends, and then we’ll all meet back here in a few years when it starts up all over again.