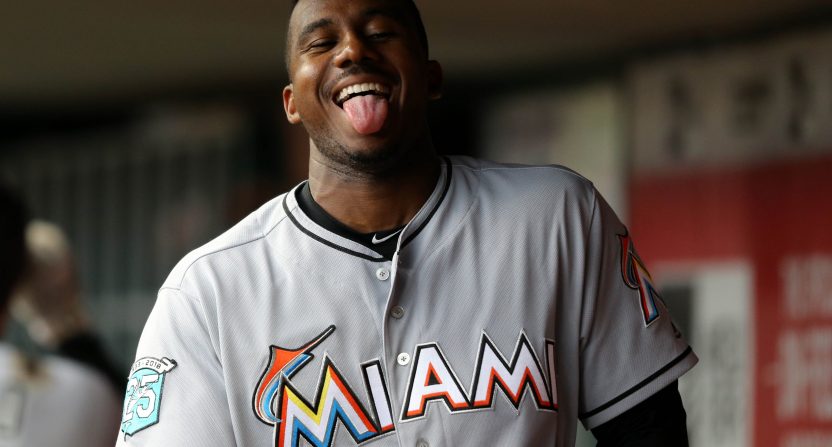 No one knows how to troll like The Dan Le Batard Show.

The brains behind the crowd-sourced Hall of Fame vote and a local holiday in South Dakota dedicated to Stugotz have come up with a new way to sow chaos in the sports world. In recent days the show, particularly producer Billy Gil, has been asking listeners to vote Marlins outfielder Lewis Brinson into the starting lineup of the All-Star Game. Brinson is a young and talented player who provides strong defense in centerfield, but his numbers this season… have not quite been All-Star worthy. The 24-year-old has batted .161 with a .490 OPS through 58 games, making him he second worst hitter in baseball this season.

The show’s campaign for Brinson even comes with an official poster.

Naturally, Le Batard Show listeners have been taking Brinson’s All-Star Game candidacy quite seriously, maxing out their votes and tweeting photos of their ballots.

Do your part. Vote @LewisBrinson to the All Star Game! pic.twitter.com/Ubpz29EyzX

Lewis Brinson for all star pic.twitter.com/HtHYsAb7op

Brinson has caught word of the campaign in his honor, but he seems to be less than flattered. In an Instagram comment, the outfielder politely asked Le Batard Show followers to vote instead for his teammates J.T. Realmuto (who actually has a case as a deserving starter) and Starlin Castro (who has been not-terrible). Gil, however, took this plea as evidence of Brinson’s selflessness and therefore another reason to vote for him.

As producer Charlie Hulme tweeted, “sorry @LewisBrinson you’re going to the all star game whether you like it or not.”

sorry @LewisBrinson you’re going to the all star game whether you like it or not pic.twitter.com/nTQTnOQlX0

In many ways, this is the perfect Le Batard Show troll job. It mocks the hometown Marlins for continuing to play a guy hitting .161 (partially for lack of better options); it pokes fun at the seriousness of All-Star voting across sports, with teams putting together all kinds of over-the-top promotional materials; and it taunts the type of old fogey columnist who will inevitably grouse that Brinson is taking votes from someone who actually deserves to start the All-Star Game.

The scary part is that the stunt could easily work. The Dan Le Batard Show has a massive and deeply loyal audience that has done things far crazier than vote a mediocre outfielder into the All-Star Game. And it’s not as if MLB All-Star voting is un-hackable. It was just two years ago that Kansas City Royals fans overwhelmed the system and nearly voted Omar Infante into the starting lineup — even though Infante had a .269 on-base percentage and was on his way to being cut by the team.

MLB avoided an awkward situation that year but could easily be headed for one this summer. When Lewis Brinson is lined up along the first base line on July 17, tipping his cap to the Nationals Park crowd, he will have Dan Le Batard and friends to thank.