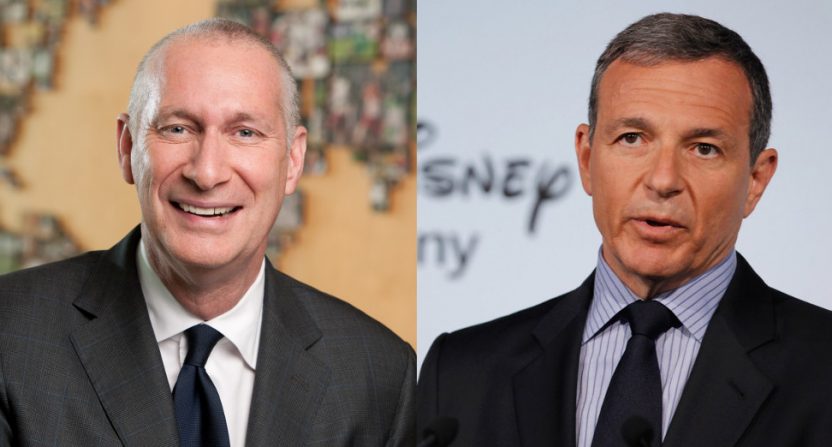 Shalini Ramachandran and Joe Flint of The Wall Street Journal have an interesting piece out there headlined “How a Weakened ESPN Became Consumed by Politics.” Much of what’s in there has been discussed here before, from the general ESPN and politics narrative through specific cases that provoked outrage such as the ESPYs award for Caitlyn Jenner through the overall challenges ESPN is facing from rising rights prices and expanded cord-cutting (which generally have more links to a shrinking cable universe than to political positions, but have often been weaved into the “ESPN is political” narrative).But an angle that’s particularly new is the reporting here on divides between former ESPN president John Skipper (seen at left above, he resigned in December, later citing an extortion plot to reveal his cocaine habit, and is now the executive chairman of Perform Group) and Disney CEO Bob Iger (seen at right above). Here’s some of the WSJ’s discussion of that relationship:

Mr. Skipper’s messy exit in December rattled employees.Though publicly Mr. Skipper seemed to have good relations with Disney’s top brass, tensions had built up over time. Early in his tenure—he took the top ESPN job in 2012—Mr. Skipper had missed a corporate plane ride with Disney’s Mr. Iger after a night of partying following the ESPY Awards, people familiar with the incident said. Mr. Iger wasn’t happy about being kept waiting. Disney later investigated to find out about Mr. Skipper’s comings and goings that night, including looking at his company phone records, the people said.A few years later, Mr. Iger was frustrated when Mr. Skipper made comments in a Wall Street Journal article that seemingly contradicted his explanation for why ESPN was losing subscribers, people familiar with the situation said. Zenia Mucha, Disney’s chief communications officer, called Mr. Skipper and said ESPN should be restrained in its public statements at a time of rapid industry change—a stern message that ESPN executives including Mr. Skipper took as an effective gag order, some of the people said.Mr. Iger later said to stock analysts on an earnings call he was misled by faulty data, and he agreed with Mr. Skipper’s explanation. Privately, Disney executives were upset that Mr. Skipper himself hadn’t reconciled the two explanations, one person familiar with Disney’s thinking said.

The article also mentions that Skipper was “unsettled” by rumors about Disney looking to sell or spin off ESPN, which reportedly was studied by the Disney finance team but never seriously considered by the board, and that (as previously discussed) Skipper may have caused some conflict with Iger by declining to bring in now-ESPN president Jimmy Pitaro as his second-in-command, preferring to promote executives from within ESPN. But the talk of rising tensions over years is interesting, as are the specifics about that flight (which seems like a really bad look for Skipper) and about the stir caused by those January 2016 WSJ comments (to Ramachandran and Amol Sharma).Some of the things Skipper said there include that ESPN saw subscriber loss coming (which contradicts things Iger and others had said) and that those cord-trimming to lighter cable packages didn’t matter because they were older and poorer, and their exit hadn’t hit ad revenue or ratings (which it had):

“We stayed pretty calm. [The loss of subscribers] didn’t come as a bolt out of the blue to us. We had been thinking about this. We had a big town hall meeting in December. We had a priorities meeting earlier where we gathered everybody together to try to ground ourselves in our business.”…”People trading down to lighter cable packages. That impact hasn’t leaked into ad revenue, nor has it leaked into ratings. The people who’ve traded down have tended to not be sports fans, and have tended to be older and less affluent. We still see people coming into pay TV. It remains the widest spread household service in the country after heat and electricity.”

Those comments created quite a stir externally, drawing some strong criticism from outlets like TechDirt. And now we have a better sense of the drama they created internally, and of their potential role in widening a Skipper-Iger divide. It’s also interesting that ESPN seemed to be proceeding very cautiously on the OTT front until near the end of Skipper’s tenure, something that seems in contrast to Iger’s focus on it (and it’s being discussed as a much bigger priority now Pitaro is in charge). We knew that Skipper and Iger weren’t always on the same page, but this reporting is significant for perhaps showing that divide was wider than thought.None of this necessarily means that Skipper would have been pushed out without the cocaine drama (he signed a contract extension through 2021 less than a month before that, and it seems unlikely Iger would have allowed that if he was eager to get rid of Skipper), but it does perhaps speak to why Skipper’s resignation was accepted and why he wasn’t just given a “sabbatical” like Pixar’s John Lasseter. And differences in approach between Skipper and Iger may also explain some of the contrary messaging and indecisive actions we’ve seen from ESPN over the past few years, and they may further suggest that we’ll see a much different ESPN under Pitaro.

The article is notable for more than that, of course. It has some interesting thoughts on morale, including a whole bunch of anonymous former execs taking shots (credit to Jeannine Edwards for going on the record with her “I think the morale there is probably as bad as I’ve seen it in my 22-year tenure” quote, unlike many of the others involved), but some current talent saying things are going in the right direction under Pitaro.It also has a very funny line from former ESPN executive vice-president (programming and production) Mark Shapiro (now co-president of WME-IMG), who said “there was too much emphasis on talking heads and fiery opinions and less on breaking news and analysis.” (The guy who oversaw things like Cold Pizza‘s “1st And 10,” the direct predecessor to First Take, probably shouldn’t be throwing stones from his glass house; even the WSJ article mentions that Shapiro “helped pioneer debate shows at ESPN.”)The piece also has some details on ESPN’s revenues and subscribers, current and projected, and those elements are interesting, as are some of the quotes about the perceived politics of the network. But it’s the discussion of the Iger-Skipper divide, and how that appears to go deeper than many imagined, that’s particularly striking. And that perhaps explains a lot about ESPN over the past few years, and about why Skipper left outright so suddenly and so soon after signing an extension.[The Wall Street Journal]