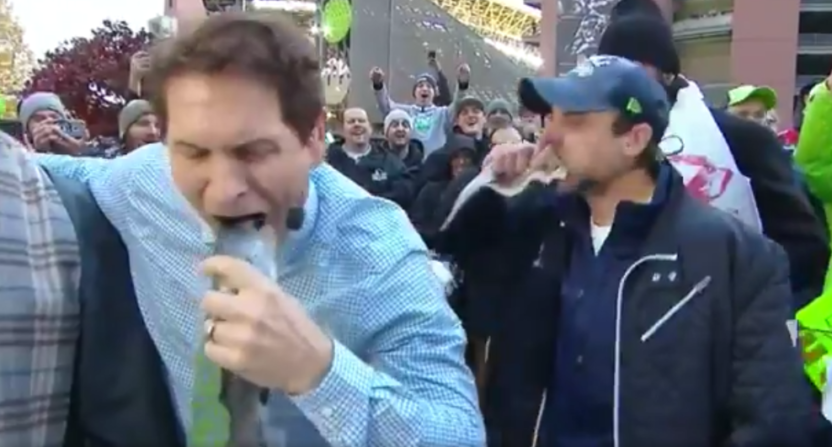 There’s some logic to the idea of Monday Night Countdown analyst Steve Young sliding into the Monday Night Football booth to replace new Oakland Raiders coach Jon Gruden. Young has been working for ESPN since 2006 and has been quite popular there both for his analysis and his sense of humor, with the latter shown in everything from biting raw fish heads to recreating parachutist near-misses.

Thus, it’s not necessarily shocking that some sports books have had him as the favorite for the job. (It’s perhaps more surprising that people are betting on the next Monday Night Football analyst, but that is higher-profile than some of the things out there to bet on.)

But Young himself says not to put your money on him, as per Eric Branch of The San Francisco Chronicle:

Steve Young, whose name continues to be mentioned as a favorite to replace just-hired Raiders head coach Jon Gruden, has said on his last two weekly appearances on KNBR that he’s not interested in ESPN’s opening.

On Wednesday, Young, a current ESPN analyst who is part of their “Monday Night Football Countdown” coverage, again noted the time commitment the MNF game-analyst job requires explains his lack of interest. Young and his wife have four children, from ages 9-17.

“I cannot take a job where you disappear for four days a week for five months,” Young said last week, later adding: “If I could do it from my backyard, sure, I’d do it.”

It makes sense for Young to say he doesn’t want the MNF job. The game analyst role is more demanding from a travel and production meetings standpoint than being a studio analyst, and if he wants to spend time at home with his wife and kids, it’s logical to stay in his current role. This also speaks to some of the challenges with a regular primetime analyst job; yes, that’s often a well-compensated role (Gruden was famously ESPN’s highest-paid employee, and while that was for his quarterback camps and so on as well as just MNF, MNF was the main thing there), but it does come with a lot of time on the road.

However, it’s also logical for ESPN to consider Young, and he told KNBR he’s been asked about that job in the past, saying “This has been the third or fourth iteration of that booth where they want me to think about doing it.” But if he didn’t want it then and still doesn’t want it, it seems unlikely to happen.

It’s also perhaps notable that Young has interests beyond football and broadcasting; a Bloomberg profile last February suggested he didn’t really enjoy his ESPN work or prepare heavily for it, and he might have quit ESPN years ago to spend more time working with the private equity firm he’s associated with, but his partners wanted him to keep the ESPN job to maintain a high profile. (For what it’s worth, Young complained about that article later that week and said he’s committed to his ESPN work.) So that’s perhaps yet another reason for Young not to take a more-intensive broadcasting job. Apologies to those who bet on him.