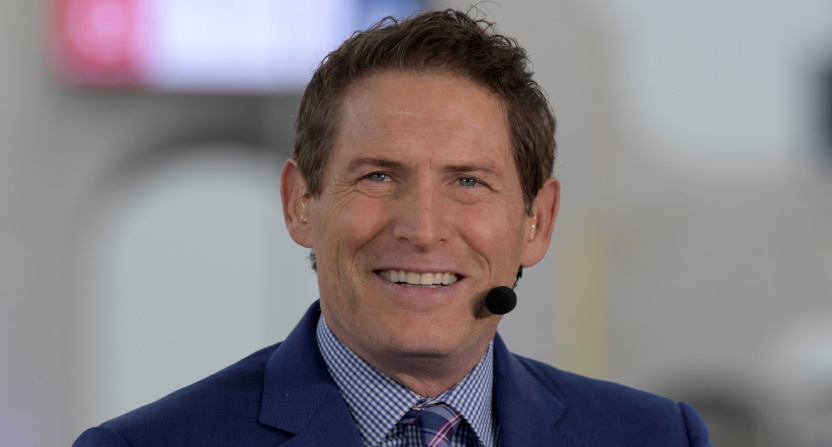 The poor quality of ESPN’s Monday Night Football matchups since they took over the franchise in 2006 (in a shift that saw MNF move to cable and Sunday Night Football move to NBC and become the NFL’s marquee matchup of the week, something that apparently was surprising to USA Today this year) has long been a running discussion in sports media circles, and it’s now apparently something that ESPN employees joke about to each other on the air. ESPN NFL analyst Steve Young (seen above on a Chiefs-Rams MNF broadcast last year), who’s appeared on Monday Night Countdown since 2006, has a weekly Monday radio appearance on ESPN New York’s The Michael Kay Show (not actually the top-rated sports show in New York, despite what ESPN PR will tell you), and this week, that ended with Young and the hosts (Kay, Don La Greca and Peter Rosenberg) joking about ESPN’s subpar MNF schedule. Here’s the full interview, and here’s the clip in question (which comes shortly after the 15-minute mark of the full interview):

The intro to this sees Young talking about his son being in college in New York, and about his plans to visit him for parents’ weekend, and how that might lead to Young visiting the ESPN New York studios. Young then talks about his upcoming schedule, saying “There’s three more weekends, Giants, Jets and a Bristol trip.” Kay responds “Oh, so you’ve got a Jet game, huh? That should be fun.” Young says “Ughh. You know the league and ESPN, they make sure we’re leveraged for the best-possible matchups.”

La Greca says “Oh, you guys always get the best stuff,” and Young says “We get the best matchups, I mean, a billion-five, that’s well-spent.” The hosts all laugh, and Kay says “You have a good one tonight, though, 49ers-Browns. Don’t get in trouble.” Rosenberg says “We won’t accentuate it, but we enjoyed it,” while Kay says “We don’t want to lose you” and La Greca says “Just don’t tweet that opinion out, that’s all.” Kay finishes with “Yeah, don’t tweet it out.”

The thing is, ESPN management really shouldn’t have a huge problem with that, as it’s obvious to everyone that their Monday night schedule is the weakest prime-time one out there (apart from the NFL Network-only Thursday games). Our April analysis of the 2019 primetime schedules found MNF behind both SNF and Fox’s Thursday Night Football in teams’ previous win-loss records and two separate viewership metrics.

So Young isn’t saying anything that people don’t know, and even high-ranking ESPN executives like Burke Magnus (executive vice president, programming acquisitions and scheduling) have publicly lobbied for better schedules in the past (with not necessarily that much improvement in the results). Even given all of ESPN’s recent attempts at “strengthening the relationship with the NFL,” it seems unlikely their Monday night package is suddenly going to get much better any time soon, as both SNF and TNF (the Fox version, at least) appear ahead of them in the primetime pecking order.

And really, that’s not as bad as it seems for anyone involved. The NFL still prefers sending its premiere matchups to broadcast, which has about 35 million extra potential homes over ESPN. But the matchups on ESPN aren’t always terrible (as noted here, even; Young and the ESPN NY hosts discuss earlier in this interview how the Browns-49ers matchup tonight isn’t bad), and they still pull in okay ratings.

And what’s even more important than the ratings is simply having a full slate of primetime NFL games; that gives ESPN a lot of carriage leverage (note how their carriage disputes seem to get resolved faster than some others, even if they’re insisting providers take channels like The ACC Network as well; MNF is a big part of that), and it’s a key element in why they can charge an industry-high per-subscriber fee ($11.08, as per Multichannel this week; TNT is next with a $3.09). And that per-subscriber fee brings in revenue for ESPN even if subscribers never watch it, so the matchups aren’t all that crucial from that standpoint.

It also should be noted that the “billion-five” Young references is ESPN’s annual deal with the NFL. That deal’s actually $1.9 billion annually, but that also covers highlights packages and more, not just MNF, so $1.5 billion may be accurate for just the MNF part. But the overall ESPN NFL deal and “long-term partnership” is very important for the network. And they pay more than the MNF games are specifically “worth” (relative to what other networks pay for better games) for a few reasons, including the premium that comes with putting top sports events on cable (cable carries less reach than broadcast, so leagues want to make sure it’s financially worth their while to put games in front of a smaller audience, which means charging cable networks a premium), the need to cite “NFL games” as content viewers will miss to providers in carriage disputes, and the desire to be in business with the NFL as a whole.

Would ESPN like to have better MNF matchups? Absolutely. That would bring in higher ratings and more ad revenue. But there are only so many games to go around, and only so many good NFL teams. And at the moment, their schedule doesn’t look too bad. But there are some obvious clunkers on it, and it makes sense for Young and others to be able to joke about those; it’s obvious to the viewing public, and you’re not helping anyone if you try to make the likes of Steve Young shill for the 0-4 Jets rather than letting out the appropriate “Ugh.” So Young’s comments here feel pretty reasonable and accurate. It’s still funny to see an ESPN NFL analyst admitting the truth the rest of the sports media world is well aware of, though, and to hear the hosts he admitted it (whose laughter suggested they didn’t totally disagree with the observation) to say “Don’t tweet that!”

[The Michael Kay Show on ESPN Radio; thanks to Joe Kling for the tip]