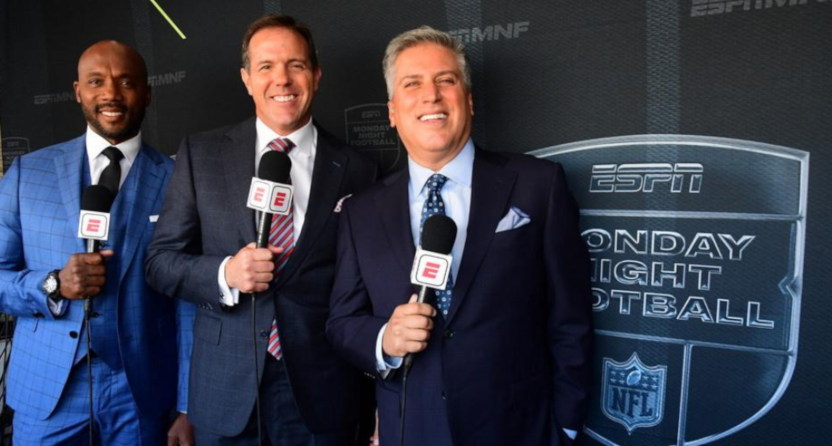 Following May’s announcement that Joe Tessitore and Booger McFarland would not return to ESPN’s Monday Night Football this season, there was lots of discussion of who the company might turn to next. That discussion has lately centered around Steve Levy, Brian Griese and Louis Riddick, and in late July, James Andrew Miller reported that those names were ESPN’s picks, but caveated that that could change to Chris Fowler and Kirk Herbstreit if the college football season was cancelled. Well, some (but not all) of the CFB season has since been cancelled, but ESPN has decided to stick with Levy, Griese and Riddick anyways, officially announcing that pairing Monday:

ESPN’s 2020 Monday Night Football commentator team will feature Steve Levy on play-by-play with Brian Griese and Louis Riddick as analysts, formulating a trio that boasts more than 45 years of broadcasting experience at ESPN. The telecast will also feature Emmy-winning reporter Lisa Salters returning for her ninth season, and officiating analyst John Parry back for his second season.

The first MNF game this year will actually be the Giants-Steelers part of that Week 1 doubleheader, and Fowler and Herbstreit will call that (as Miller also noted in July). Interestingly enough, the team of Levy, Griese and Riddick called the doubleheader game last year, and Griese has actually done that for the past two years, working with Beth Mowins in 2018. So they do have some MNF experience.

This trio also has a fair bit of game-calling experience. Levy is in his 28th year with ESPN and has done significant play-by-play for hockey (both the NHL and college hockey) and college football with them. His most recent college football stint, since 2016, has seen him regularly working with Griese for ESPN and ABC games, with that duo calling more than 60 games together over the past four years (which should help on the chemistry side). Griese has been calling college football for ESPN since 2009, and he’s also done NFL broadcasting work, serving as the Denver Broncos’ radio analyst in 2010 and 2011 and calling Broncos’ preseason games with Levy since 2018. Riddick is newer to calling games, but has been at ESPN since 2013 and done a lot of NFL studio work there, and he’ll be a familiar face to MNF viewers thanks to his work on Monday Night Countdown and the halftime show.

A three-person booth can be tricky, but it can also offer a good variety of insights, especially when the analysts come from different backgrounds. Griese’s quarterback experience and Riddick’s defensive back and front office experience should help there. Putting all three commentators in the booth also will undoubtedly be less awkward than the two-and-half-person “Boogermobile” approach ESPN took back in 2018. And Levy and Griese have strong history together, and Riddick worked well with them on last season’s doubleheader game. But Monday Night Football is still a massive stage, and one where the broadcast has taken a lot of criticism in the past few years, and it’s notable that ESPN reportedly tried to get Peyton Manning, Tony Romo, and Drew Brees before eventually staying in-house. We’ll see how viewers react to the Levy-Griese-Riddick team.