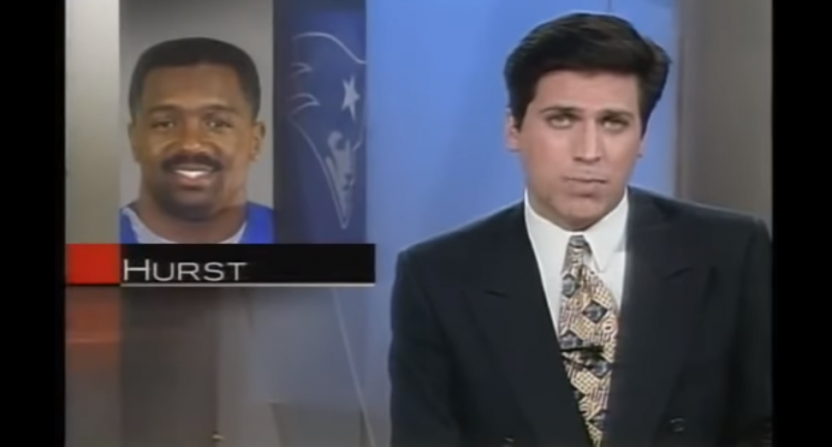 ESPN’s Steve Levy has done a whole lot in his 25 years at the network, which began in August 1993. He’s worked on SportsCenter during all those years (and will be recognized for that when he hosts a special 11 p.m. edition of the show Thursday alongside Keith Olbermann), has called play-by-play for hockey and college football, has covered the last 24 Stanley Cup Finals, and has hosted NFL and NHL TV and radio programs.

But the main element many are discussing around this Levyversary is his role in one of the funniest on-air bloopers in ESPN history, from the 1995 SportsCenter where he meant to describe Patriots’ DB Maurice Hurst’s “bulging disc” and said something different:

It’s still amazing to watch that for how quickly Levy realizes his mistake, corrects and moves on while keeping a mostly-straight face, although he starts to crack up during his list of other injuries (poor Scott Mitchell and Rodney Peete). And co-anchor Keith Olbermann doesn’t help much, with his “Thank goodness there’s no video of that” (at 1:34) causing Levy to really lose it. At any rate, Olbermann and other ESPN colleagues mused on this again in a tribute video to Levy:

Olbermann’s comment about the aftermath is particularly great. “As we walked back to our shared desk, he said these words that I have lived with and lived by ever since; ‘Do you think I’m going to get in trouble for that?'” And Karl Ravech throws in a reference to Levy as a “bulging, I’m sorry, budding star from New York” when he first came to ESPN. This is only one of the many discussions of this, though. Even ESPN PR’s Josh Krulewitz referenced this in a rather-funny tweet:

For 25 years, @espnSteveLevy has been an "anchor " of ESPN in more ways than one. His career has truly been bulging & no one has as sense of humor about their on-air mistake like he does. He will be celebrated this week. Congrats Steve: https://t.co/kwJzBL4wka SteveLevySC25

Also, Dan Patrick had Levy on his show Tuesday, and as part of a larger interview, walked through the whole saga of the bulging disc:

The most interesting part of that may be towards the end (around 5:15), where Levy talks about calling a Michigan game with Hurst’s son Maurice Hurst Jr. and getting his producer to play the “bulging disc” clip, which then later led to this tweet:

Finally got to watch the @espnSteveLevy Bulging disk comment …feel like my mom hid that one from me as a kid?

It’s cool to see Levy going along with all this; there are surely other moments from his career he remembers more fondly, but hey, that one did break through into the popular consciousness. And he really is an incredibly good sport about it, especially when it comes to hearing that from people on the street who think they’re the first ever to mention it. And while “bulging disc” far from defines his career, it is a memorable moment, and the unapologetic embrace of it is appreciated; there’s no alternative explanation offered here. And bloopers can be fun, like this one from Levy’s first SportsCenter (with Ravech, on August 7, 1993) where he started by looking at the wrong camera:

There is of course much more to Levy’s career than that, as detailed in ESPN’s release on his anniversary with the network. A few highlights from that:

“Steve Levy’s contributions to ESPN and SportsCenter over the past 25 years are immeasurable,” said Norby Williamson, ESPN executive vice president and executive editor, studio production. “Not just what viewers see but behind the scenes as well. He’s always been the ultimate team player and he continues to make us better.”

…And as SportsCenter has evolved over the course of his career, Levy has evolved with it, from hosting half-hour shows jammed with scores and game recaps in the 1990’s to today’s longer shows and even bringing fans up-to-date in the morning with a brief edition on the ESPN App. And he has appeared in 46 of the iconic “This is SportsCenter” ads.

“Obviously going to ESPN is the greatest decision I’ve ever made,” he said. “It’s been so good, I’ve been treated great, and I’m still to this day the happiest anchor in the building.”

And Levy’s been able to maintain that happiness despite the thousands of bulging disc jokes he’s heard over the years, which is impressive. He’s become one of the faces of SportsCenter and one of the faces of ESPN, and there may be much more ahead for him. Hopefully it won’t all lead to this level of ribbing.