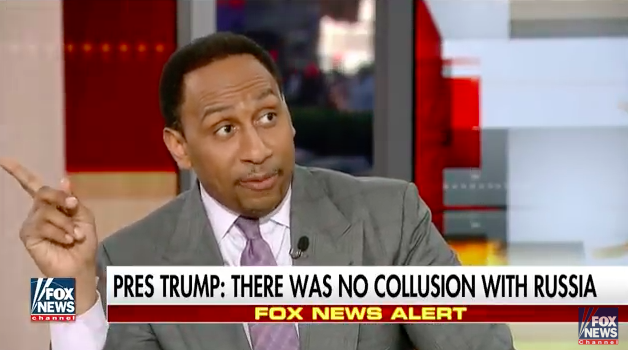 The cross-section of ESPN and politics continues to be a focus as the calendar moves from 2017 to 2018. Already this year we’ve seen ESPN have to publicly respond to comments that Katie Nolan made about Donald Trump after a year of controversy with the network entering into the political spectrum.

With regards to ESPN and politics, we just know you’re dying to hear what ESPN’s loudest talker, Stephen A. Smith, has to say about the whole thing. His comments are… puzzling to say the least.

In comments to the Sporting News that covers First Take’s ratings since moving from ESPN2 to ESPN among other topics, Smith was asked a question about Trump’s feud with Jemele Hill and the network at large. Curiously, Smith said that ESPN is a sports network and that its personalities should protect the brand and stay in their lane.

SN: You guys like to play hardball, so how do you feel about President Trump ripping ESPN, Jemele Hill and protesting NFL players?​

SAS: Do I believe the President should be wasting his time commenting about stuff like that? No. Do I believe the President has been a bit juvenile in his behavior? Yes he has. Having said that, it’s one thing to attack what he does, it’s an entirely different matter to attack him. When you attack him, then we are stepping out of our lane. We are a sports network. We have an obligation to wake up every day with the mindset that we not only speak for ourselves but we speak on behalf of the brand. It is not a brand that we own. It is a brand that employs us. It has entrusted us to represent it just as much as we care about representing ourselves. So with that in mind, we have to be cognizant of all those things.

Yes, the President is going to say what he has to say. Yes, he’s going to venture in our lane to the point where it’s apropos for us to respond. But we also need to be cognizant of the fact it’s incumbent upon us to leave it there and not extend beyond that point. We’re a sports network. You become successful. You sustain a level of success by giving people what they expect. By, figuratively speaking, ‘playing the hits.’ Not deviating too far away from what people turn on the channel and tune in for to hear. As long as we remember those kinds of things, then it’s going to lend itself to us being successful as opposed to us losing our bearings because we get caught up in our emotions, and we do things that ultimately sacrifice the brand and ourselves just to react to something for 15 seconds or 15 minutes. We have to be smarter than that — even if the President doesn’t appear that way sometimes.

These comments are quite peculiar seeing as how Smith is someone who has routinely stepped out of the sports lane while at ESPN. It’s amazing that Smith would actually say something like this when he has been a regular guest on cable news programs, sometimes to even talk critically about Donald Trump.

Keep in mind this is the same person who is channeling his inner LaVar Ball by telling everyone else at ESPN to “stay in your lane.”

Of course, Smith has been a frequent cable news guest throughout the years talking sports and politics. He’s been on Fox News multiple times, even going head to head with Bill O’Reilly in 2016. He’s appeared on CNN and MSNBC as well.

So either Smith is being hypocritical here or he just doesn’t think the same rules apply to him. Maybe ESPN just really trusts Stephen A. Smith, the same person who was suspended for insensitive comments about domestic violence and the same person who ominously threatened Kevin Durant on national television, to be their brand ambassador to cable news and the political world.

This has always been one of ESPN’s biggest issues. It’s always been clear that the rules don’t apply to everyone, especially the network’s biggest and most brash personalities. From suspensions to who can appear where and talk about what, the network has been consistently inconsistent.

Given ESPN’s newfound existence as a political football to be tossed around, it’ll be fascinating to see whether or not Smith continues to moonlight as a cable news pundit in addition to his First Take duties. If he is, what message does that send to everyone else at the network who ESPN has instructed to be so cautious in talking about politics?