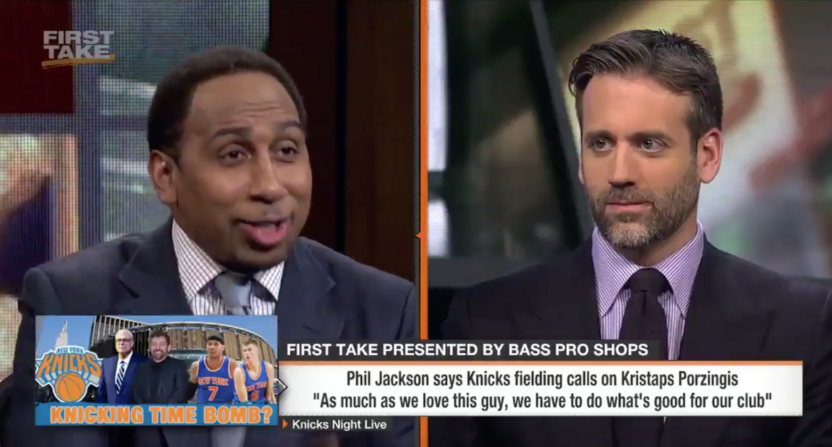 One thing you have to admit about Stephen A. Smith: The guy is passionate.

While many TV talking heads offer opinions that seem contrived or scripted, Stephen A. shares his takes with so much enthusiasm it’s almost impossible to imagine he doesn’t actually believe them.

Well on Thursday morning’s edition of First Take, Stephen A. delivered what might be his most classically Stephen A. moment since the infamous Kwame Brown rant of 2008.

Stephen A. has been extremely, extremely angry at Phil Jackson for a long time, and it just boiled over here. He said he was going to keep his composure, and he kinda did for a few seconds, but then it was all just too much. Watch in the second half of the video (after Max Kellerman looks like he’s seen the ghost of hot-takers past) how Stephen A.’s face contorts into a truly tortured laughing-to-keep-from-crying expression. There’s real pain there!

There’s just so much going on in this video. Like how Smith repeated the exact same line about Odom being on crack with equal emphasis a second time, as if we didn’t get it at first. And how Max Kellerman realized he had to play it cool in the face of this insanity and chuckled more nervously than any man has chuckled before. And Stephen A.’s entirely divorced-from-meaning use of the term, “metaphorically speaking.”

Of course, this isn’t entirely harmless fun. Lamar Odom has dealt with an actual drug problem, and Stephen A. probably shouldn’t trivialize that on national TV in a conversation about Phil Jackson. Crack use, which has ruined thousands of lives, generally shouldn’t be any sort of punchline.

But in a way, that makes the whole thing even more worthy of the Stephen A. Hall of Fame. This rant had everything that defines Stephen A.: bulging veins, shocked co-hosts and the creeping feeling that something is a little offensive.