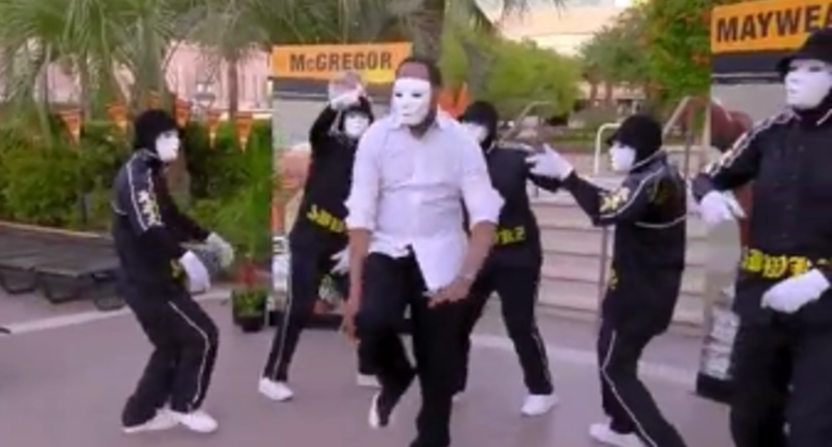 Saturday’s Floyd Mayweather-Conor McGregor fight in Vegas has brought even more insanity than usual to that city, and ESPN and FS1 have both been getting in on it, parking their debate shows there and (in ESPN’s case) having countless SportsCenter segments on location (with a desk overlooking the pools at Caesar’s Palace, no less). But there’s only so much straightforward analysis you can do, and when you’re in Vegas, things have a tendency to get weird. That’s the only way to explain this clip of Stephen A. Smith dancing with the Jabbawockeez:

Y'all…. go get Stephen A. pic.twitter.com/9GmrYY6yWi

“We were somewhere around First Take, on the edge of the ESPN set, when the drugs began to take hold.” Of course, Stephen A. is no fan of drugs, as one response pointed out:

But there were plenty of other great responses:

Stephen A. had so much Henny last night it JUST hit him.

Bruh they could have at least gave him a hat too, Forehead looking like a Billboard for First Take

Now I love Stephen A. Smith, were good friends but, the fact that he had the audacity to initiate such a sequence of moves is appalling.

How yo uncle enter the family reunion pic.twitter.com/a1mNwzqQBJ

The jury is out on whether this was more or less convincing than Stephen A.’s recurring role on General Hospital. And did no one tell him World of Dance is a NBC property, not an ABC one? Preposterous. At least he’s branching out from his usual hot takes? And if there’s ever a V For Vendetta sequel, they’ll know who to call…