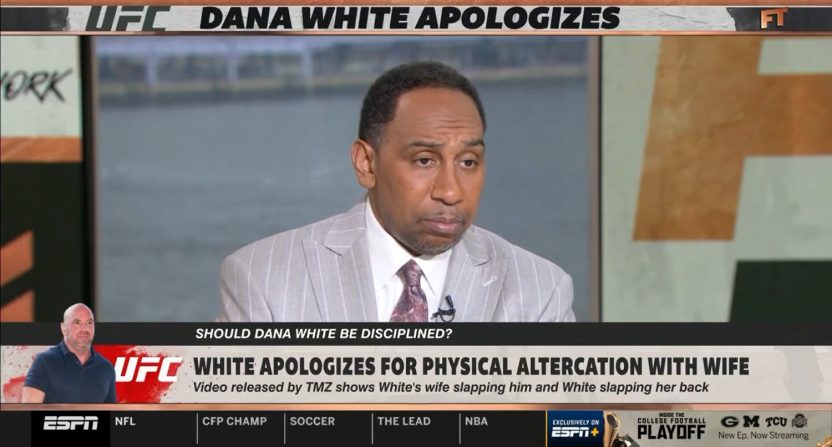 One day after Dan Le Batard slammed his former employer, ESPN, for not covering a video of UFC president Dana White slapping his life, Stephen A. Smith addressed the incident on First Take.

On Monday, a gross video emerged of White getting into a physical altercation with his wife Anne as the couple was at a nightclub celebrating the New Year in Cabo San Lucas, Mexico. In the video obtained by TMZ, Dana White can be seen getting slapped by his wife before he quickly retaliated by slapping her in the face. Bystanders then stepped in to break up the fight.

Wednesday morning, Stephen A. Smith addressed the incident on First Take. ESPN had previously been condemned for its lack of coverage surrounding the incident, as critics cited the network’s business partnership with White. While Smith did cover the incident, his commentary probably won’t do much to change anyone’s mind about ESPN’s seemingly soft stance on a business partner committing domestic violence on camera.

Stephen A. Smith addressed the video of Dana White slapping his wife pic.twitter.com/HwuGAjXnxi

“Dana White is not just somebody that’s connected in the world of sports. He’s a friend. I love the guy, personally,” Smith admitted. “So this is a very hard subject for me. We talk all the time, we’ve certainly connected briefly since this happened. He knew there was no way on earth that I wasn’t going to talk about it.”

Smith suggested White should face the same discipline that the UFC president would hand to someone he oversees, “because that would be consistent with who he is.”

Watching someone slap their wife on video and then suggesting the person who committed the offense should be in charge of the punishment is a rather ridiculous take. White should face a punishment, but he absolutely should not be the one in charge of deciding on that sentence.

“With all the things that we’ve learned and the kinds in an ordinate amount of times we’ve had to address subjects like this, we have to maintain consistency in pointing out, you do not put your hands on a woman if you are a man,” Smith said. “Dana White knows that. All I can say is that again, he has spoken out against men who put their hands on women before, and whatever punishment you would exact under these circumstances to somebody else is what he should apply to himself.”

That’s a dangerous amount of trust being given to somebody who just did something reprehensible. ESPN broadcasts UFC events and frequently welcomes White on their shows to promote those fights. First Take and other ESPN shows may have been slow to cover White’s altercation because Damar Hamlin’s health has dominated the news cycle. But now that First Take did finally address the gross video featuring White, it sure sounded like Smith was giving his friend a pass.

“I think it’s important, if you’re gonna sit on this platform, you owe it to your audience to be honest,” Smith continued. “Dana White is not just somebody I know in sports…he’s a friend, I love him…he knows how wrong he was to do this and he knows we’re on-air, he knew ahead of time because I reached out to him to let him know I would be talking about this this morning. He knows he crossed a line that he has never crossed before.”

I appreciate Smith putting his biases on the table before talking about the incident, but if he couldn’t address White slapping his wife without blinders on, then maybe First Take would have been better off having someone else address the altercation.