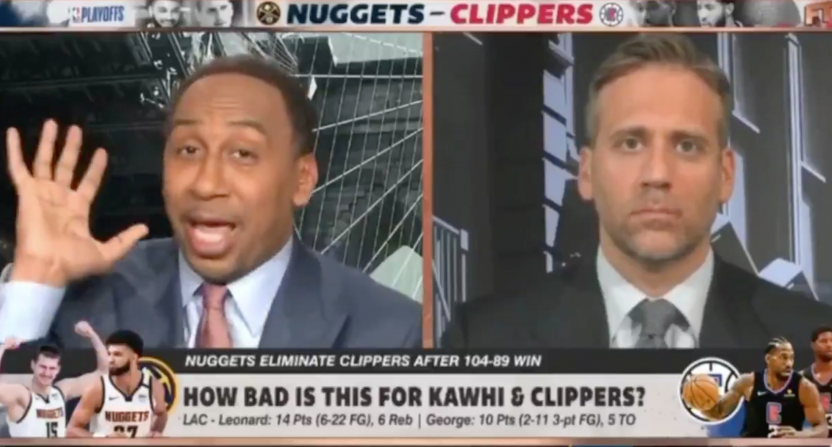 Depending on whether or not you’re a fan of ESPN’s Stephen A. Smith, learning that the boisterous on-air personality was gearing up to unleash upon his First Take partner Max Kellerman Wednesday morning might fill you with either excitement or dread.

I’ve specifically stayed off the grid this morning JUST to save everything ounce of energy I have for @FirstTake . I’ll tell you this though: @maxkellerman has never been in more trouble than he is today. Get your popcorn ready. I’m already out of the control.

Yet longtime viewers of First Take could probably anticipate what was coming. Kellerman has often stated his admiration for Kawhi Leonard, considered one of the best players in the NBA — with All-NBA First Team and Defensive Player of the Year honors — during his seven seasons with the San Antonio Spurs. Leonard ascended to superstar status last season, leading the Toronto Raptors to an NBA championship — the second of his career.

Big things were expected of Leonard when he signed with the Los Angeles Clippers in free agency. Through most of the 2019-20 season, including the restart in the Orlando bubble, the Clippers were viewed as a favorite to win the NBA title. Kellerman continued his praise of Leonard, going so far as to say he was a better player right now than LeBron James and a better player under pressure than Kobe Bryant.

So when the Clippers lost in the Western Conference semi-finals to the Denver Nuggets Tuesday night, squandering a 3-1 series lead, Smith was loaded up to ridicule his colleague for his support of Leonard and his basketball knowledge. Kellerman not offering much of a defense might have made Screamin’ A. even angrier.

I like Max Kellerman, but this was long overdue since the Kobe comment. Stephen A Smith is doing the Lord’s work. pic.twitter.com/Yo8m33r80t

“When it comes to the sport of basketball, you should be banned from talking about the sport,” Smith said.

“Your take was embarrassing! After all of this noise that you have made all of these years about Kawhi Leonard, you come on the top of the show — I stepped back, I got a cup of tea right here, Max — I gave you the floor and your response to the American public, after the drivel you have subjected us all to for the last several years is ‘Oops, I blew it’? That’s the best you can do?”

Kellerman may have wanted to shrug off Leonard’s performance and just admit he was wrong. But Smith wasn’t about to let it go. Not with airtime to fill, old clips to throw back at him, and highlights — perfect for social media — to be made.

Oh noooo, @stephenasmith brought out the receipts this morning! ?

"Kawhi Leonard, that might be the biggest choke job we've ever seen in NBA history." pic.twitter.com/jJEcRRaJSw

Even more surprising than the Clippers losing the series to Denver was how poorly the team played with its season on the line. Star players are expected to shine in decisive moments. Yet Leonard was stunningly bad when he needed to be at his best, scoring only 14 points on 6-of-22 shooting (including 2-of-7 on three-point attempts). Worst of all, Leonard (and fellow star Paul George) scored no points in the fourth quarter.

Kellerman played the good sport and had to eat what Smith was feeding him on Wednesday. If you like debate shows like First Take, ridiculing someone’s opinion is entertaining.

Will Kellerman stay loyal to Leonard after the Clippers’ upset loss? There will be a whole offseason and new NBA season for Leonard and the Clippers to make Kellerman look smart for his support again. For now, however, Stephen A. appears to have the final word on this matter.